Shielings were temporary summer camps in a distant part of the settlement’s common grazings to which, in summer, the women and children took the sheep, goats and cattle. There they looked after the animals during the day and made products, such as cheese, while the men worked the arable land around the settlement for crops of barley, oats and, later, potatoes. The animals were brought back to the settlement once the crops were harvested, and grazed in the infields to manure them. 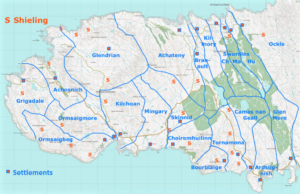 Shielings continued to be used after the clearances, and their remains are scattered all across Ardnamurchan.  They are often a mile or so from the settlement, and often sited in very beautiful places.  Commonly, they consist of anything from one to ten circular huts.  Sometimes there is barely a trace of the huts, no more than a slight, rounded rise in the ground, but some were quite substantially built of stone.

This hut is one of a group in a small glen to the southeast of Beinn nan Ord, on Ormsaigmore land. Compared to many others, it is substantially built and may have been used over many years. It would have been roofed with timber and had a thatch of reeds, grass or bracken, and might have slept one or two people; some of the smaller ones may have been for children, and at some sites there is also a larger hut, big enough to act as a communal meeting place.

6. Shieling at Druim an Scriodain