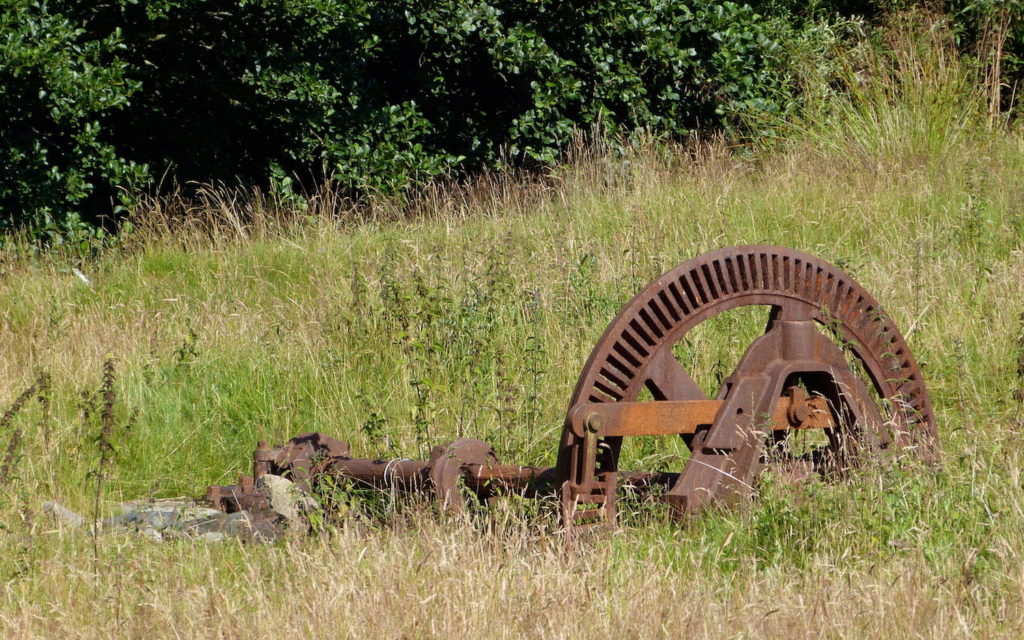 Kilchoan’s mill stood for hundreds of years on the banks of the Millburn, the Allt Mhuilinn, just by the bridge over the Millburn on the road approaching the shop. Its most visible remains is this gearing mechanism, lying in the field in front of Tigh an Uilt croft house. Some of the foundations are also visible in the grass, as is the outline of the whole building when viewed on Google Earth. 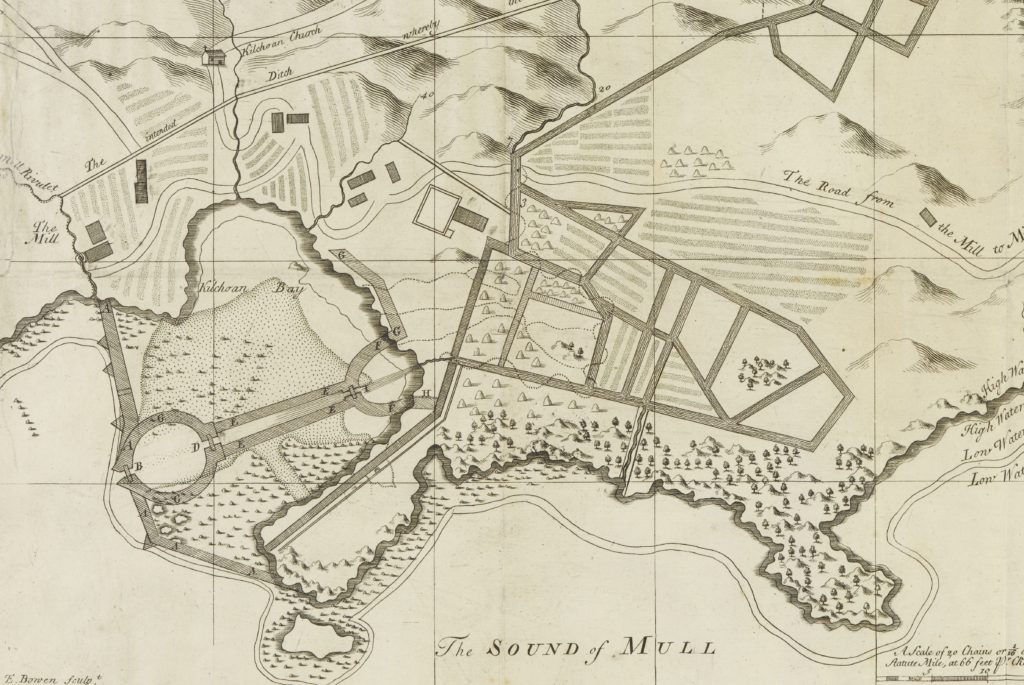 The earliest map which might show Kilchoan’s corn mill is Bruce’s map of 1733, but Cowley’s much more detailed map of the following year (above, [1]) shows two buildings, one with a waterwheel drawn on it, and the words ‘The Mill’. As far as we known, the ‘intended ditch’ which would have brought water from the Allt Choire Mhuilinn was never built. 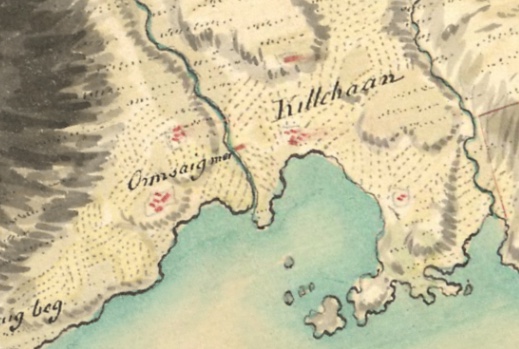 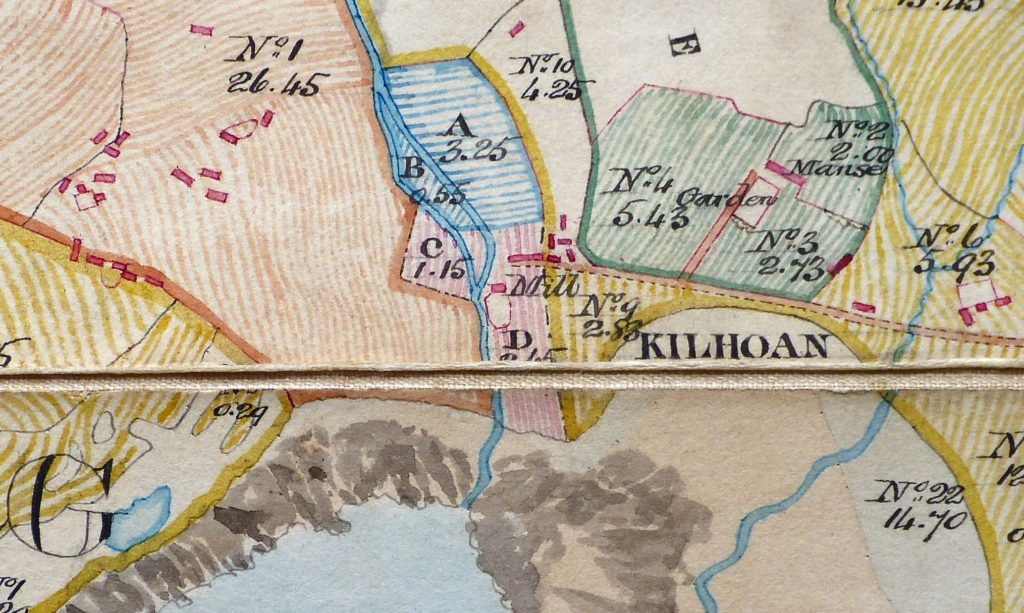 The mill is clearly marked on William Bald’s map, drawn for the Ardnamurchan Estate in 1806, but this picture is from a very faithful copy held by the present Ardnamurchan Estate [2].  It marks a mill race, which brought the water from the Millburn into the mill house, and a walled area in front of the mill house. Bald coloured his fields to indicate the settlement which held them – so Kilchoan’s are in yellow, Ormsaigmore’s are orange, and the minister’s glebe is green, so the fields C and D marked in pink may have belonged to the mill keeper. It is less obvious why there are two fields, A and B, marked in blue.

While Bald’s main purpose was to record the size of the fields held by each tenant, and their use, Alexander Low’s survey, carried out shortly after, added a little more detail. His entry is difficult to read, but it records the ‘Kilhoan Mill and Change-House’ as belonging to Donald Connel who held 7.6 acres of arable land with a rent in 1806 of £13.5.-, and in 1807 of £20.-.-, the total value of the property being £20.-.-.  He also states that, “Besides this land, the Miller has grazings on the Farm of Kilhoan valued with that Farm”.

A ‘change house’ usually means a place where travellers can rest and take refreshment and (sometimes) hire fresh horses (ie ‘change’ their horses) – a sort of early coaching inn.

The mill is marked on the first OS map, dated 1856.  Bald’s map shows several buildings to the immediate east of the mill, but these have been reduced to one in 1856, which is probably the existing croft house. 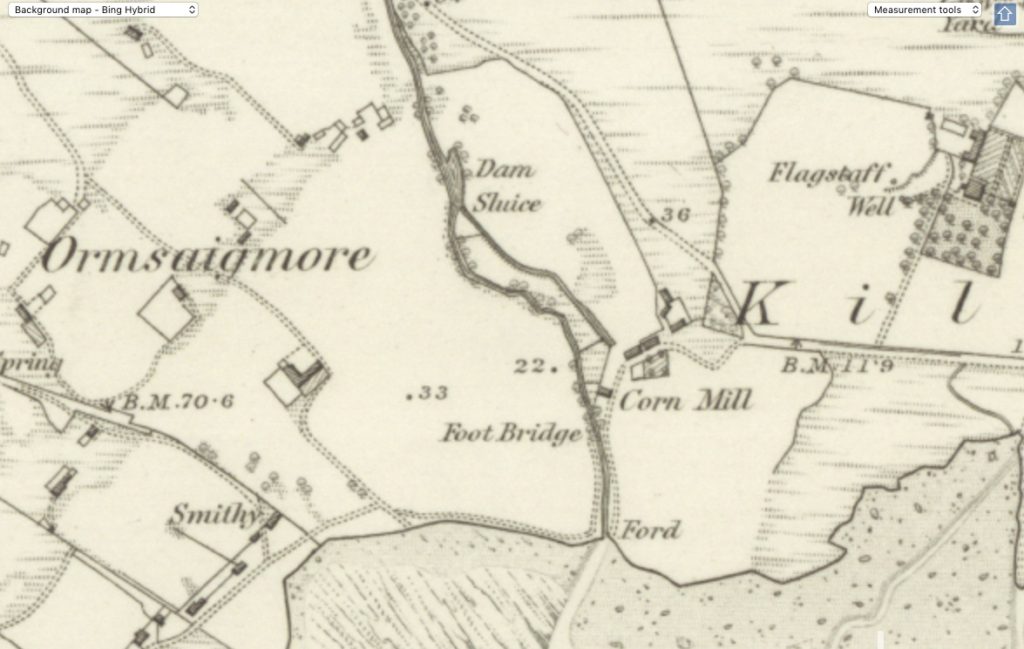 The 1872 OS map [1] marks a dam across the Millburn and a sluice, the former to raise the water level for the mill’s use, the latter to control its flow, but the old mill race now seems to stop above the mill, while a much thinner line, perhaps a much improved race, passes the end of the mill house where the wheel was marked on earlier maps.  The mill is labelled a ‘Corn Mill’.  The three croft houses which exist today are marked to the east of the mill.

We know that the mill was leased for five years to John MacPhail in 1892 by the then owner of Ardnamurchan Estate, John Jamie Dalgleish.  The lease included ‘Kilchoan Meal and Carding Mill and the Machinery therein’, the ‘mill lead and troughs for bringing on the water to the Water Wheel’, the arable land and hill grazing attached, the ‘whole of the Upper Flat consisting of two rooms, and the easternmost lower room of the Old Inn at Kilchoan’, these rooms to be used as a dwelling house, and the westernmost room which was a ‘shop or store’ – all for an annual rent of £18.  The lease was renewed in 1897 for a further five years, yet…. 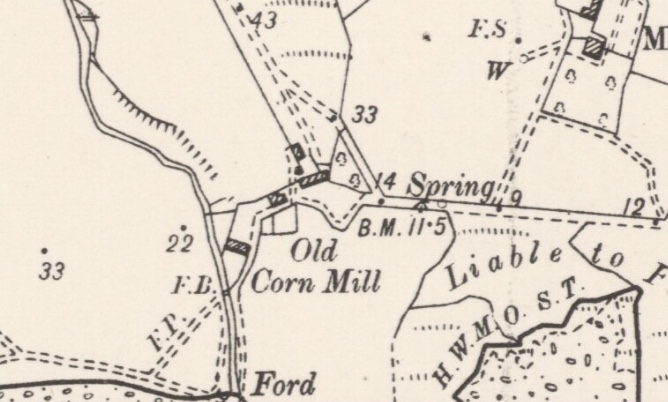 ….the 1899 6″ OS map of Kilchoan [1] shows that, despite the recent renewal of the lease, the mill race appears to have fallen out of use, and it labels the building as the ‘Old Corn Mill’.

A lease agreement between CD Rudd, then owner of Ardnamurchan Estate, and a Mrs MacPhail, dated 1902, includes reference to “House, Shop, Byre, Land, and Grazings at Kilchoan,” which confirms that the mill was not functioning then. The mill was certainly out of use by 1915, when the land court fixed the annual rent for a Mrs Mary MacPhail at £9:10/-.  By 1938 there was still a ‘store’ on the croft, and Tigh an Uilt croft house continues to be known as The Store up to the present day. 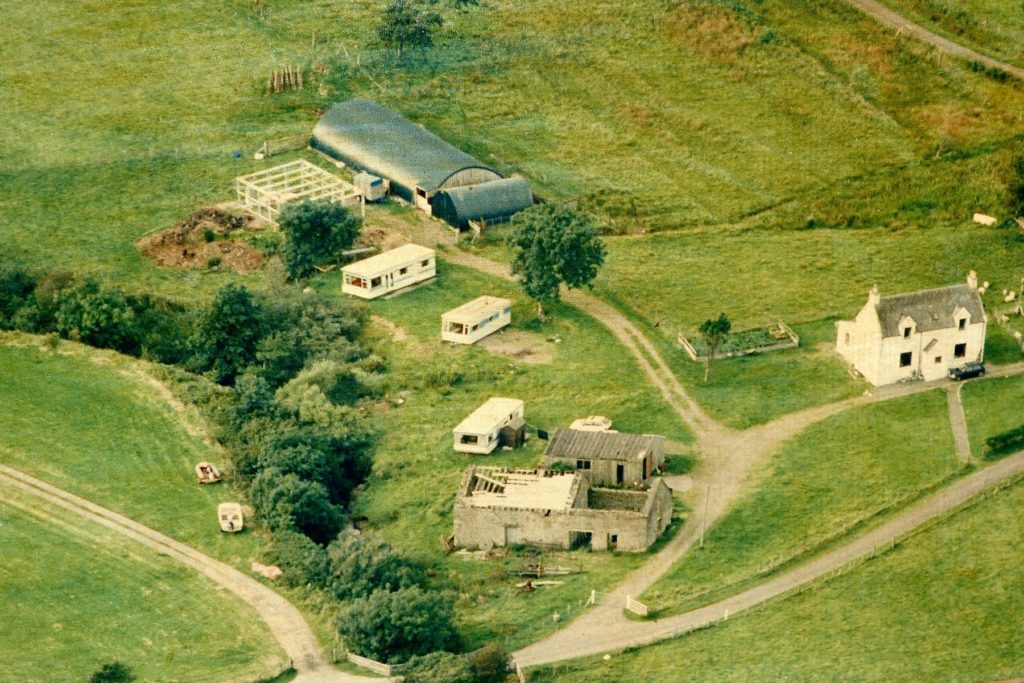 The mill building continued to be used, but for other purposes, for example for housing cattle, sheep, and hay. A serious attempt was made to completely refurbish the building and turn it into a bistro, but the costs were high and grants unavailable.  The mill building was in a state of decay by the time this aerial photo was taken in 1991.

The building was finally demolished in 2001, leaving the large iron, cogged wheel standing on the site, and one of three stone grinding wheels leaning up against the gable end of Tigh and Uilt croft house.

Many thanks to Pat MacPhail, Alasdair Thornton and John Burgess for their help.

[1] OS maps, and Cowley’s map, by kind permission of the National Library of Scotland – website here.

[2] Bald’s map copy of 1856 by kind permission of Ardnamurchan Estate.