In 1856, Sir James Milles Riddell’s trustees sold the Estate, comprising 2,225ha (55,000 acres) and including the Ardnamurchan peninsula and land eastwards to Strontian, to Mr John James Dalgleish (1836-1916), who lived in a house he built in Glenborrodale.

During James Dalgleish’s time, a fundamental change took place in crofting law. This was the Crofters Holdings (Scotland) Act of 1886, which created legal definitions of crofting and the crofter, granted security of land tenure to crofters, controlled rents, and produced the first Crofters Commission, a land court which ruled on disputes between landlords and crofters.

In 1897 Charles Dunnell Rudd bought the land from Acharacle and Salen westwards to Ardnamurchan Point, including Ardtoe and Shielfoot, while the land to the east, from Salen to Strontian, was bought by the Department of Agriculture. It is also possible that Rudd acquired land along the north side of Loch Shiel. Rudd, had worked closely with Cecil Rhodes in the diamond fields of South Africa; together, and with others, they set up the De Beers Mining Company. By the time he came to Ardnamurchan, Rudd was very wealthy. 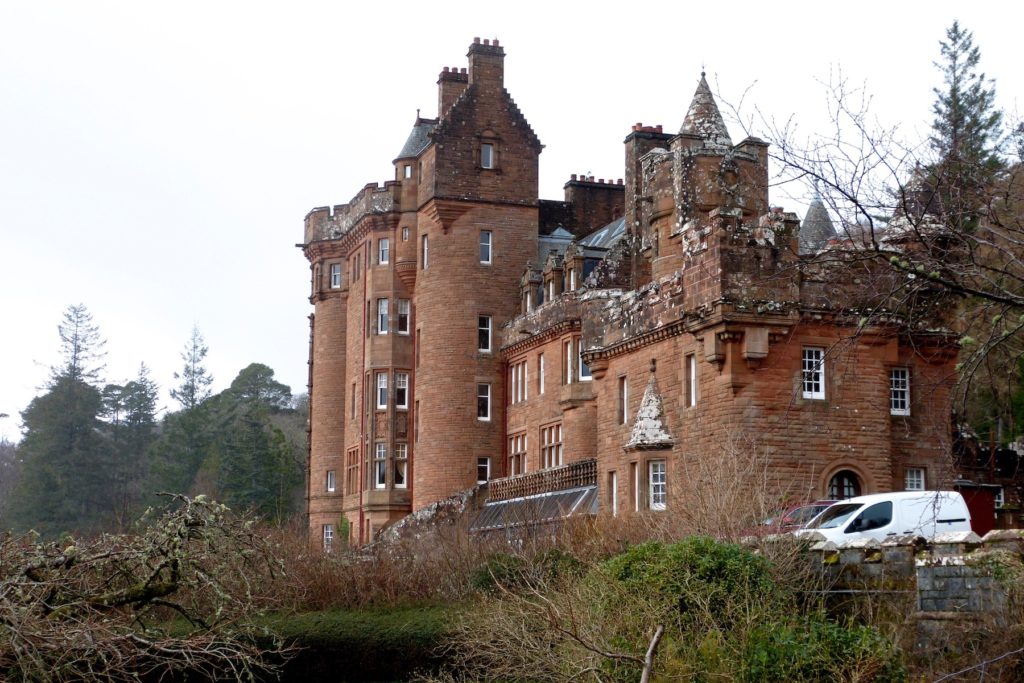 Between 1898 and 1901 Rudd built Glenborrodale Castle on the site of the house which Dalgleish had occupied. He commissioned the architect Sydney Mitchell to design the building, and it was constructed using a red sandstone brought by puffer from Annan in Dumfries-shire. The builder was Donald Fletcher from Tobermory on Mull, and the labour came from Skye and local communities. While he was waiting for the castle’s completion, Rudd lived at Shielbridge House on the banks of the River Shiel, which was demolished shortly after the Second World War. Cecil Rhodes attended the housewarming in 1901.

On Rudd’s death in 1916, the Ardnamurchan Estate, now confined to the area to the west of Acharacle, Salen and the Shiel River, was bought by Sir Kenneth Clarke of the Paisley thread manufacturing family. He entertained lavishly at Glenborrodale, one of his major interests being his membership of the Western Isles Yacht Club in Tobermory. His visitors included King George V in his ocean-going yacht Britannia. He also let the castle to famous names like Sir Thomas Sopwith and Sir Thomas Lipton. Sir Kenneth’s improvements included, in 1928, the installation of an electricity generating plant at Gorten which provided electricity to Acharacle and Salen. 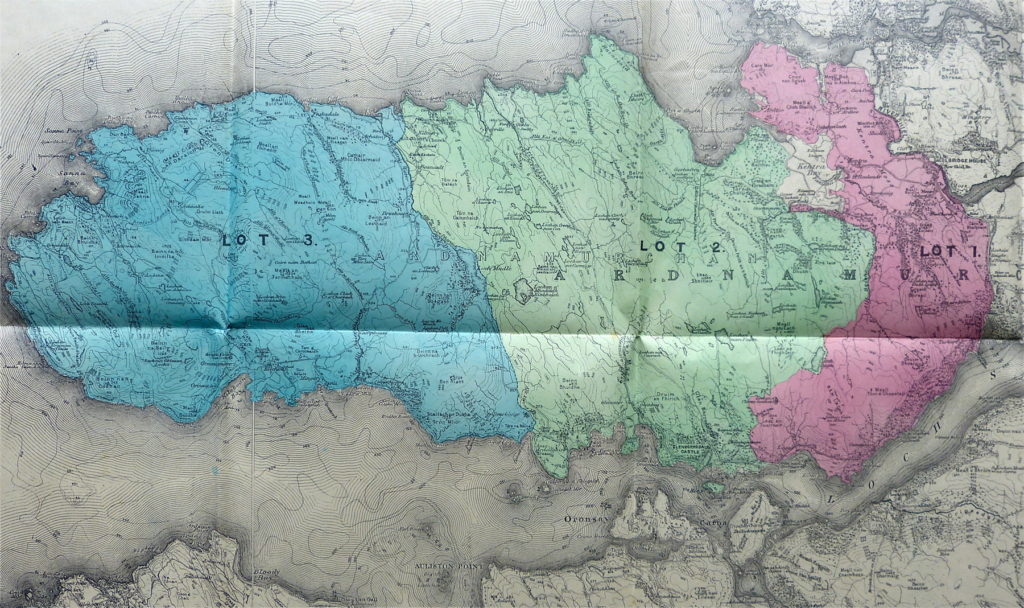 In 1933, after Sir Kenneth’s death, the Estate was put on the market in three lots [1]. In 1936 the Estate in its entirety was bought by Lord Trent, the son of Jesse Boot, the first Lord Trent and founder of Boots the Chemists. In Lord Trent’s time some forty crofters took advantage of a housing improvement scheme under the 1926 Housing (Rural Workers) Act which enabled them to obtain grants of £100 towards housing repairs, a loan for the balance being made by the Department of Agriculture. In many cases, the money was used to put an upper storey on their croft houses.

The farms at Ardslignish and Glenmore were used to investigate diseases and other problems in black-face sheep and Galloway cattle. One Ardnamurchan-bred Galloway bull became champion at the Ayr Show and was exported to Newfoundland to start the first Galloway herd there.

During the Second World War the Ardnamurchan peninsula was a restricted area. The loch was used for the assembly of convoys and local residents were required to carry permits to allow movement into and out of the area. The Navy occupied Glenborrodale Castle but it was also available to staff of Boots as a wartime rest centre. 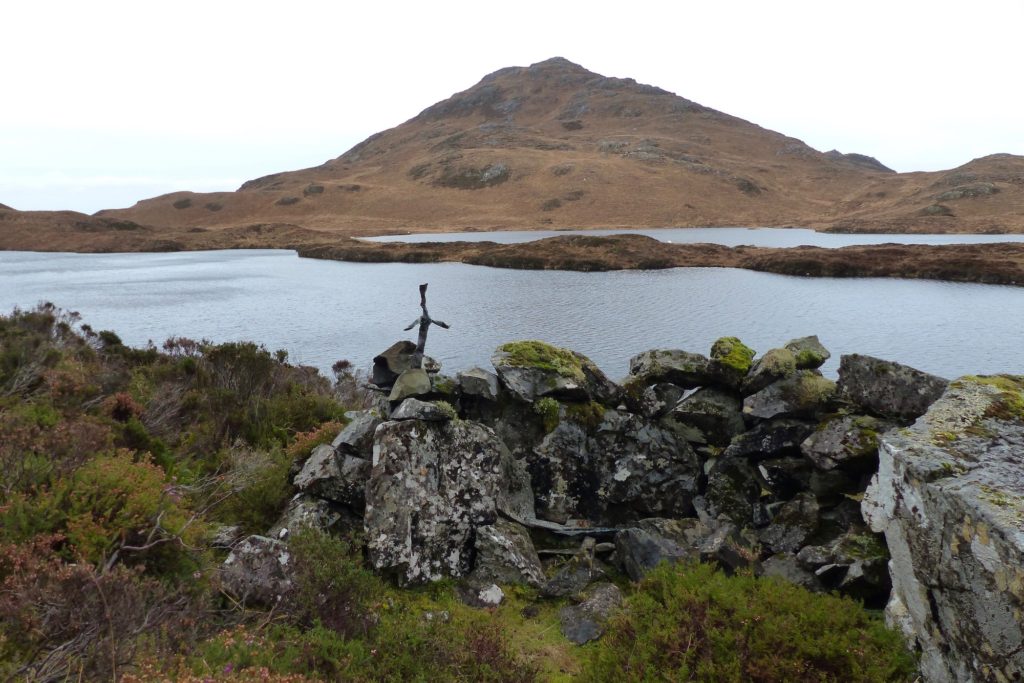 During the war, several aircraft crashed on the peninsula. A Hawker Hurricane flew into the side of Druim na Gearr Leacainn, killing the pilot, Flight Lieutenant Arthur John Woodgate of the New Zealand air force in appalling weather in February 1944. A cairn (above) was raised on the spot to his memory. An Avro Anson landed on the beach at Sanna and a Whitley bomber crash-landed on croft land there, both without severe injury. Following the sinking of a U-boat off the Isle of Coll a German naval officer’s body was washed ashore at Port na Cairidh. He was buried in Kilchoan cemetery though some twenty years ago his remains were returned to Germany. 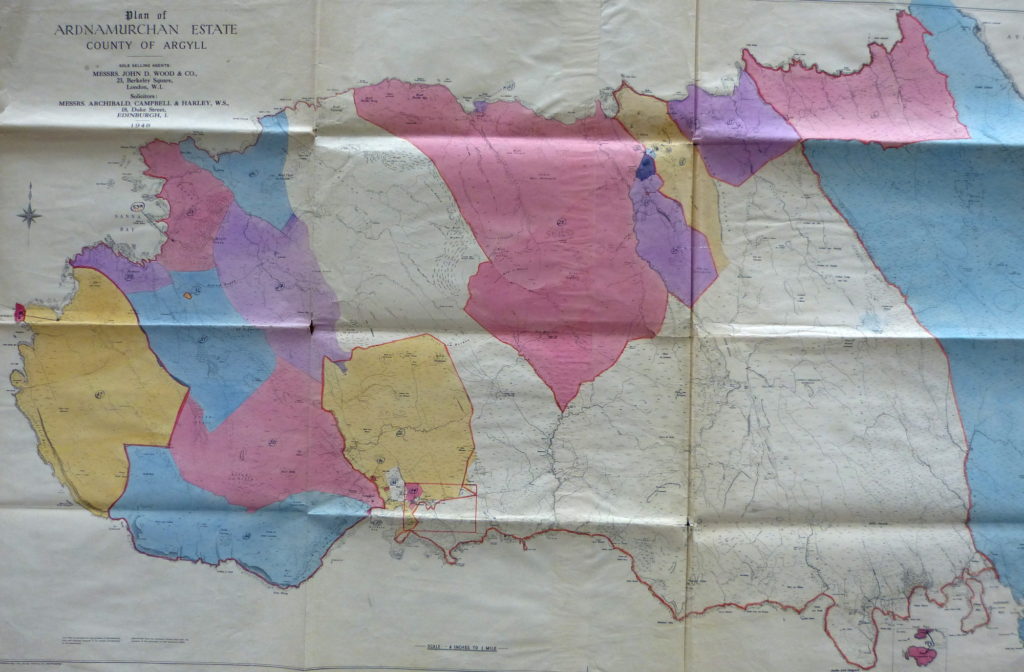 In 1948/49 Lord Trent sold the estate with the exception of the lands of Achateny, Glendrian, Mingary, Skinnid, Choiremhuilinn, Bourblaige, Tornamona, Camas nan Geall and Glenmore, this area being kept by Boots for the breeding of Highland cattle [1]. Glenborrodale Castle, with its sawmill and two of the houses, was bought by Colonel M.H.B. Ritchie, while most of the remaining area was sold off to different buyers, including members of the MacKenzie family.

In 1969 the Ritchies sold Glenborrodale Castle to the youngest daughter of Lord Trent, after which it was converted into an hotel. It was acquired in 1973 by a subsidiary of J Lyons & Co, and sold to Trust House Forte Ltd in January 1977, who ran it as an hotel. In 1992 the property was purchased by an American, Mr Rich, who used the premises as his personal residence when in the Highlands.

In 1968 Boots sold their remaining land on Ardnamurchan together with their herd of Highland cattle. The purchaser of the Estate, Mr Michael Thomson, also bought Kilchoan Hotel and rebuilt and extended Mingary House to make an estate house, a feature lacking since the castle at Glenborrodale had been separated from Ardnamurchan Estate on the break-up of the estate following Lord Trent’s ownership.

Mr Thomson remained proprietor until 1975 when the whole of the land from Glenmore to Kilchoan, including Achateny, became the property of the General Accident Insurance Company. They sold it to Mr John Grisewood, who sold it to Mr Donald Houston.