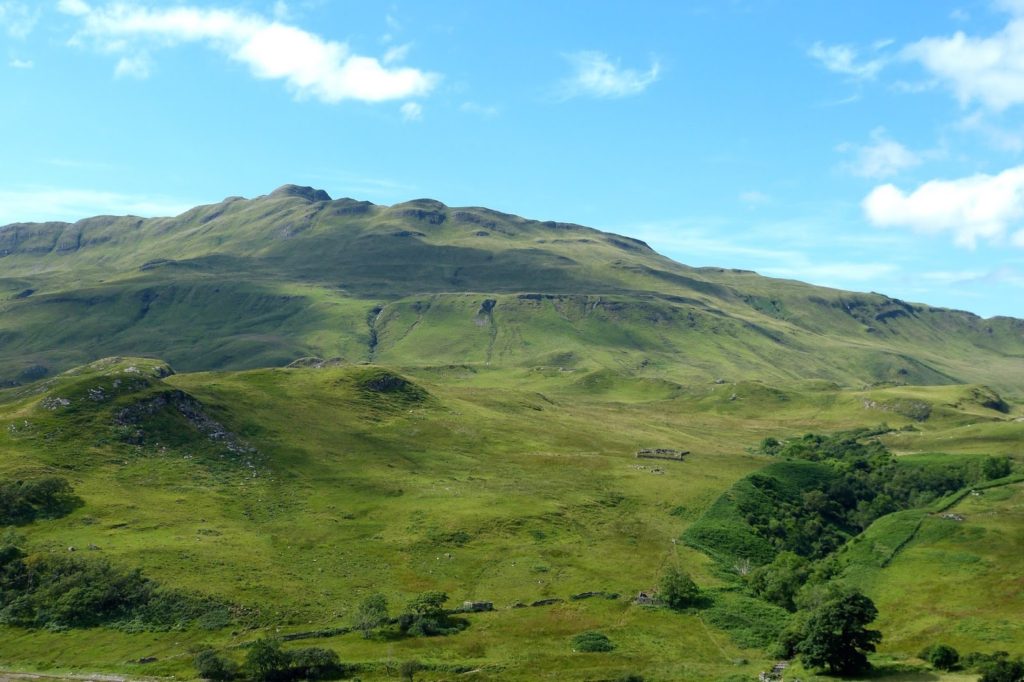 Tornamona, or Tornamoine, is Torr na Moine in Gaelic, the hill of the moss or bog, a settlement named for the low rise at centre left of this picture. In the photograph, taken from the viewpoint by the car park above Camas nan Geall, the settlement’s only visible feature is the large 19th century sheep fank on the hillside slightly to the right of centre in the picture. 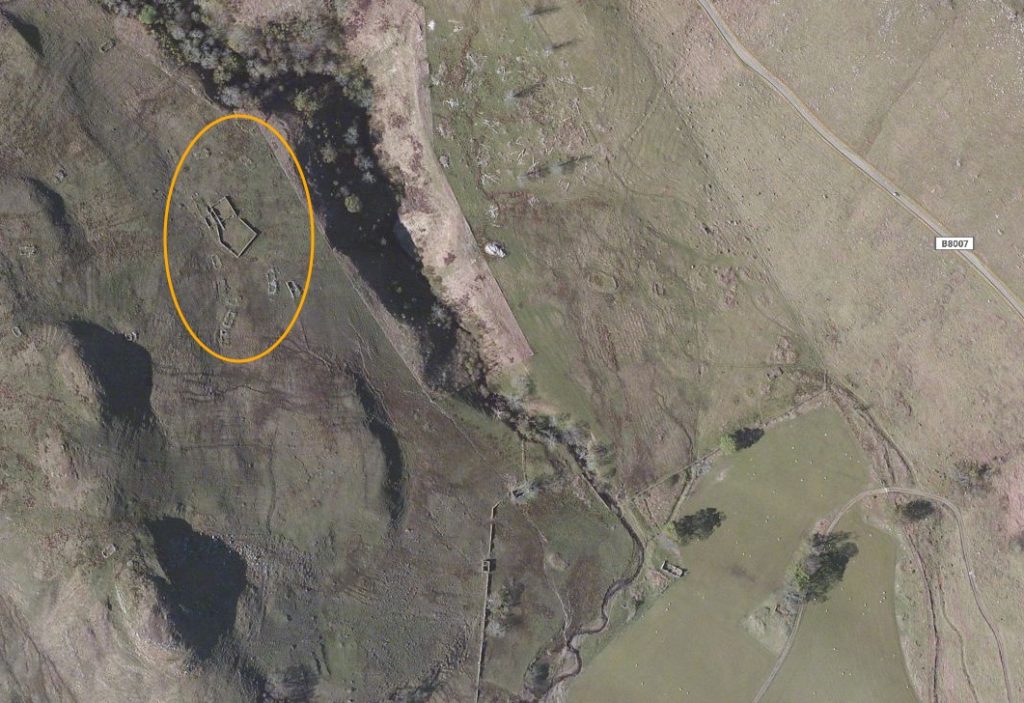 The site is clearly visible on this satellite image [1], with the glen of the Allt Torr na Moine to the right of it, and the B8007 Salen-Kilchoan road at right. Part of the neighbouring settlement of Camas nan Geall is visible towards the bottom of the image. 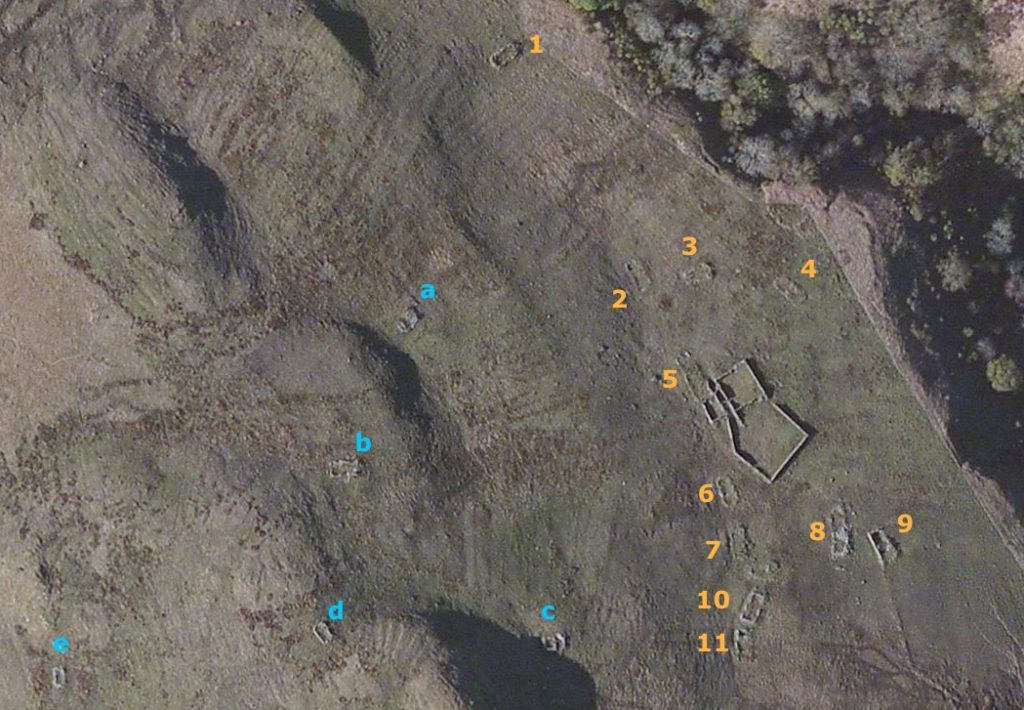 This close-up of the same image [1] shows that there are eleven buildings which were part of the original village close to the Allt Torr na Moine glen, while five more are found on the hill to the west. The large structure is the 19th century sheep enclosure. Also visible are the marks left by the use of the rig and furrow system of arable culture.

Torr na Moine was one of West Ardnamurchan’s settlements with lands that stretched north as far as Loch Mudle. It is probably many centuries, perhaps even a millennium old, and we know that, in 1737 it had a population of 19 in five families – nine men, six women and four children. 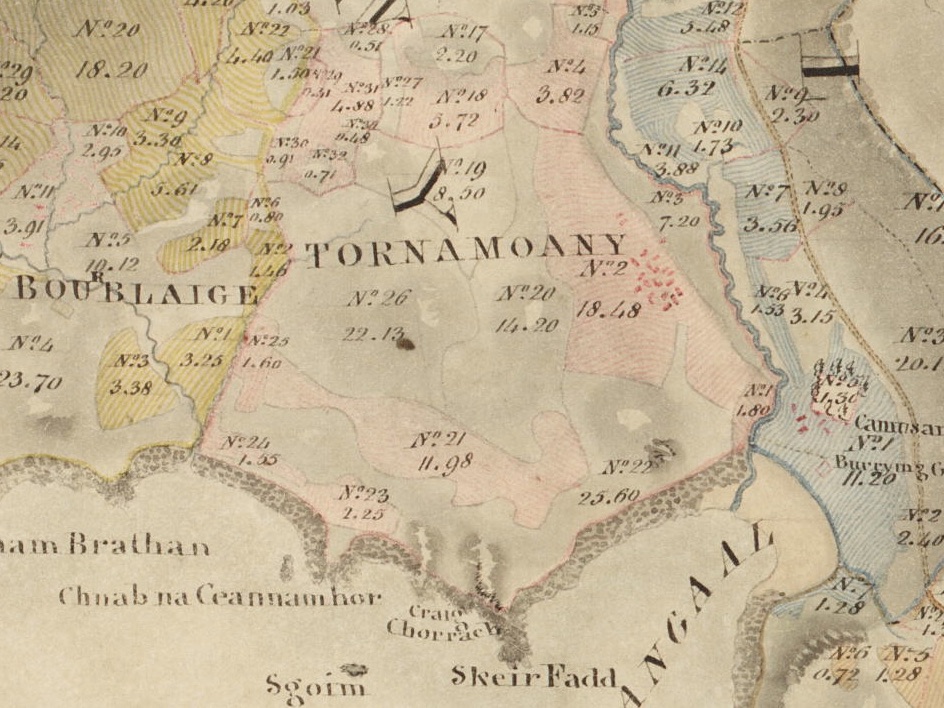 Bald’s map of 1806 [2] shows Tornamoany’s many buildings and scattered arable fields. Alexander Low, in the report that accompanied the map, stated that, “This farm…. ought properly to be joined to the next [Camas nan Geall]. Both together would then make a very good sheep walk, fit for Cheviot sheep, but the junction would occasion the removal of a number of poor tenants.” Landlord Sir James Milles Riddell had the settlements of Torr na Moine, Bourblaige and Camas nan Geall cleared in 1828, and they became an extensive, but not long-lasting sheep farm. 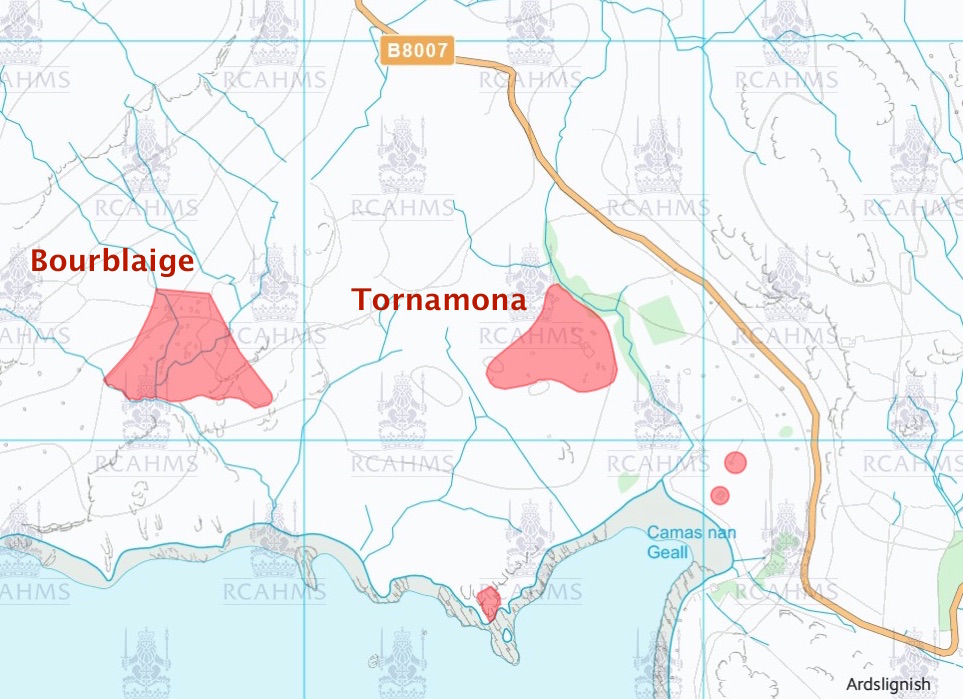 This map [3] shows the location of the land which has been scheduled as a national monument. The RCAHMS states, “The monument comprises a depopulated settlement of post-medieval date. It consists of the remains of at least 17 buildings and associated structures and enclosures.” 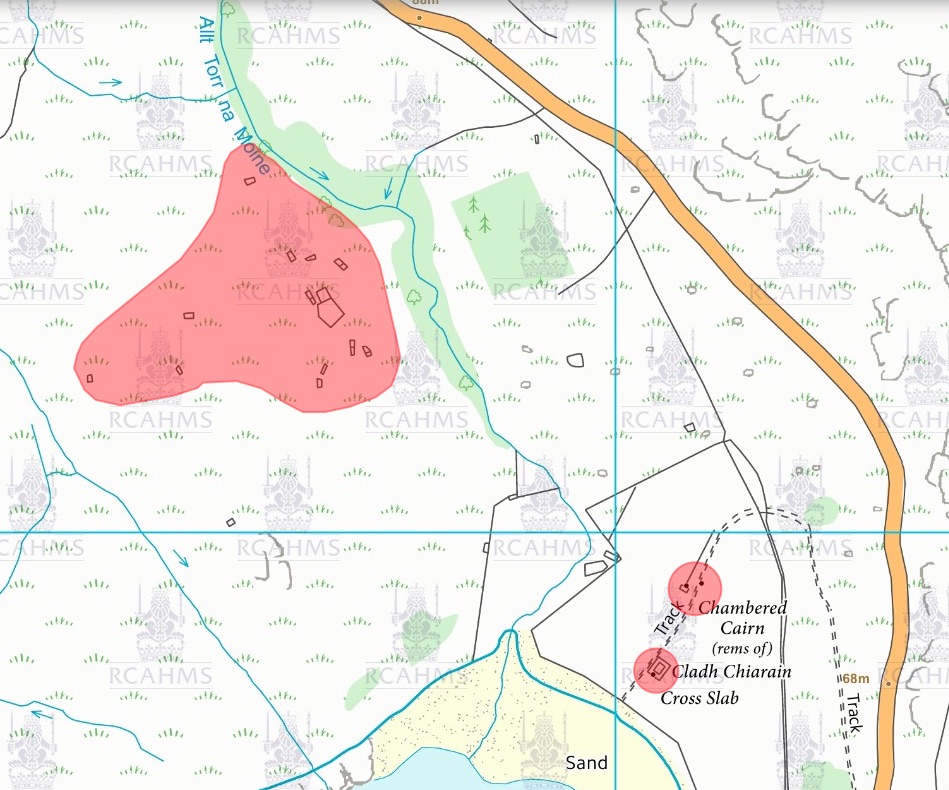 The main part of the cleared settlement is to the NNW and SSE of the sheep enclosure, but there are also buildings scattered up the hillside to the west. While the map shows nine buildings by the enclosure, eleven can easily be found on the ground.

The RCAHMS continues, “A variety of different types of buildings are represented, as well as a series of later sheep fanks.

“The monument is of national importance because of its potential to contribute to our understanding of post-medieval settlement and economy and the process of the Clearances in Ardnamurchan. Its importance is increased by its proximity to other monuments of potentially contemporary date, such as the cleared settlement of Bourblaige which is already scheduled.”

This view of one of the settlement buildings and the fank is taken from the south, with the Kilchoan road visible half way up the hillside beyond, but…. 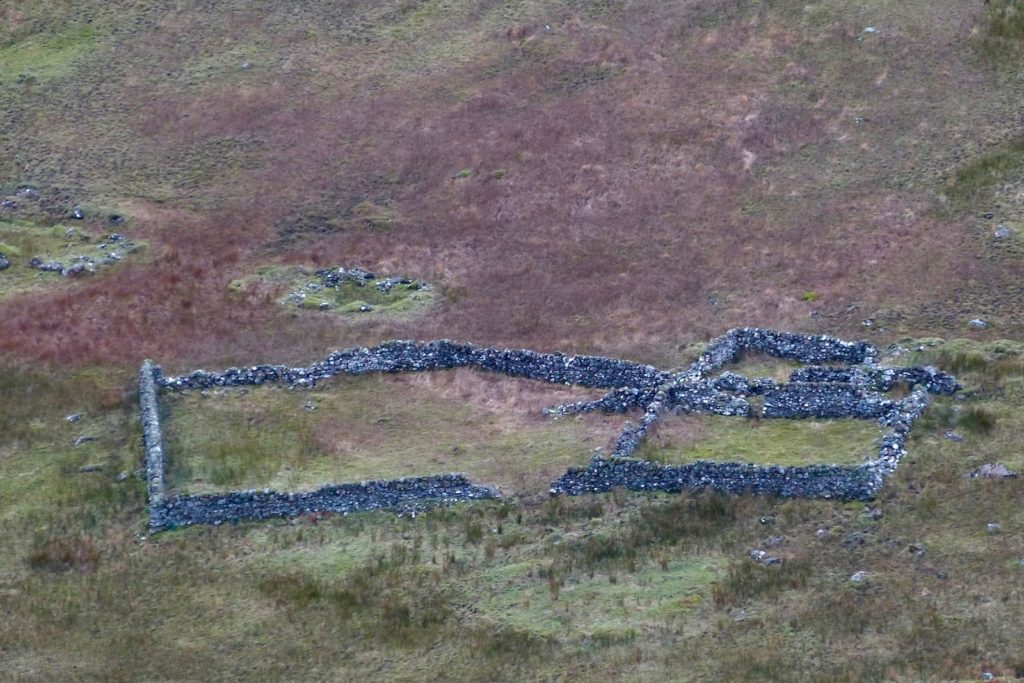 …. the site, and the size of the sheep fank, is very clearly seen from the road. 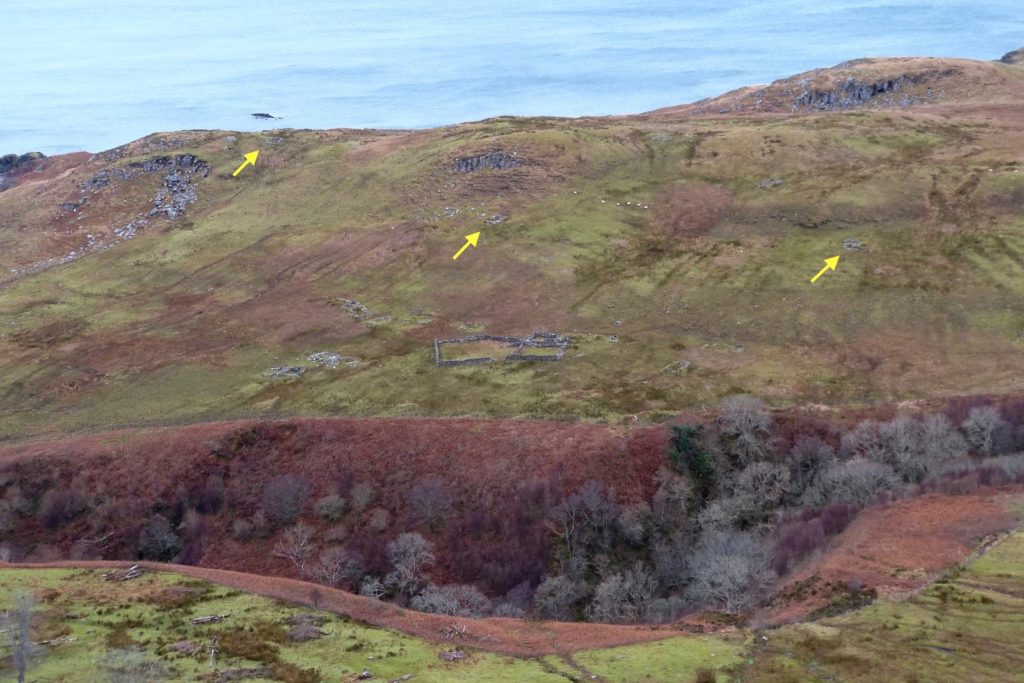 The RCAHMS report states that, following the clearance of the village, “a shepherd lived here until the 1860s.” It is very likely that shepherds continued to live in both Tornamona and Camas nan Geall, but they would have been employed by the sheep farm. Of more interest are the houses scattered along the Torr na Moine ridge to the southwest of the settlement (arrowed), which may well post-date the clearance. 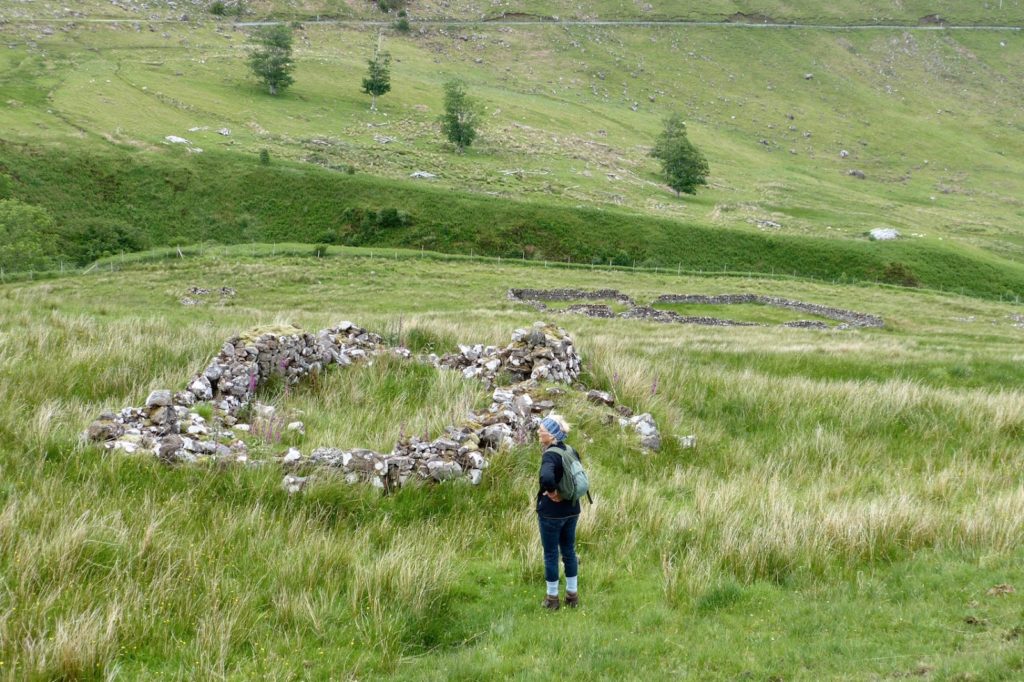 This is a picture of one of these houses, with the fank in the mid distance. While they might have been part of the original settlement, the houses in most settlements were closely grouped, and this is how Tornamona’s are shown in Bald’s 1806 map. It is possible that these houses were built by those employed by the sheep farm, but I do wonder if some were built by other refugees from the 1828 clsearance.

While the motives for scheduling a large area of Tornamona are laudable, the RCAHMS might have done better to have scheduled a much larger area of Camas nan Geall than the two small patches it did. Camas nan Geall is far more likely to have Viking remains, and there are features within the Camas nan Geall settlement, such as a very old sheep fank, which are lacking in Tornamona.