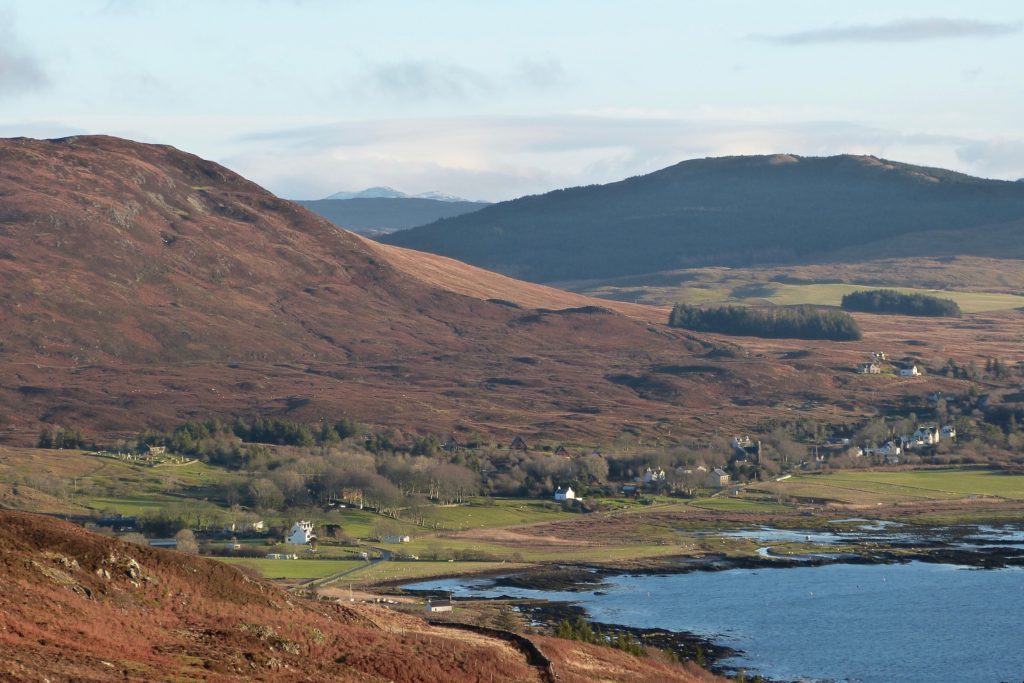 Kilchoan is the largest township on West Ardnamurchan, situated on the shores of a wide but shallow bay on the south side of the peninsula. Today, it’s a highly dispersed village, with houses running northwards along the road to Portuairk and southeast along Pier Road to the CalMac pier, but the ancient heart of the settlement is around the more wooded area seen at left centre in this picture.

The name is derived from Cill-chomhain, the church of St Comghan (variously spelt Congan, Comgan, Comhghan, Chomhghain). Comghan was a Leinster prince who lived in the late seventh and early eighth centuries, became an abbot, and eventually settled near Lochalsh in Ross-shire, from where he founded churches up and down the west coast. That St Comghan founded a church beside this bay indicates that there was already a community living there.

The earliest evidence of Kilchoan in the written record is in 1541 when the tenant is recorded as Donald McAlister McKane, at a time when the peninsula was still held by Clan MacIain [1]. It appears as ‘Killchoun’ on Alexander Bruce’s map of 1733, with the church and mill, and its waterwheel, clearly marked. 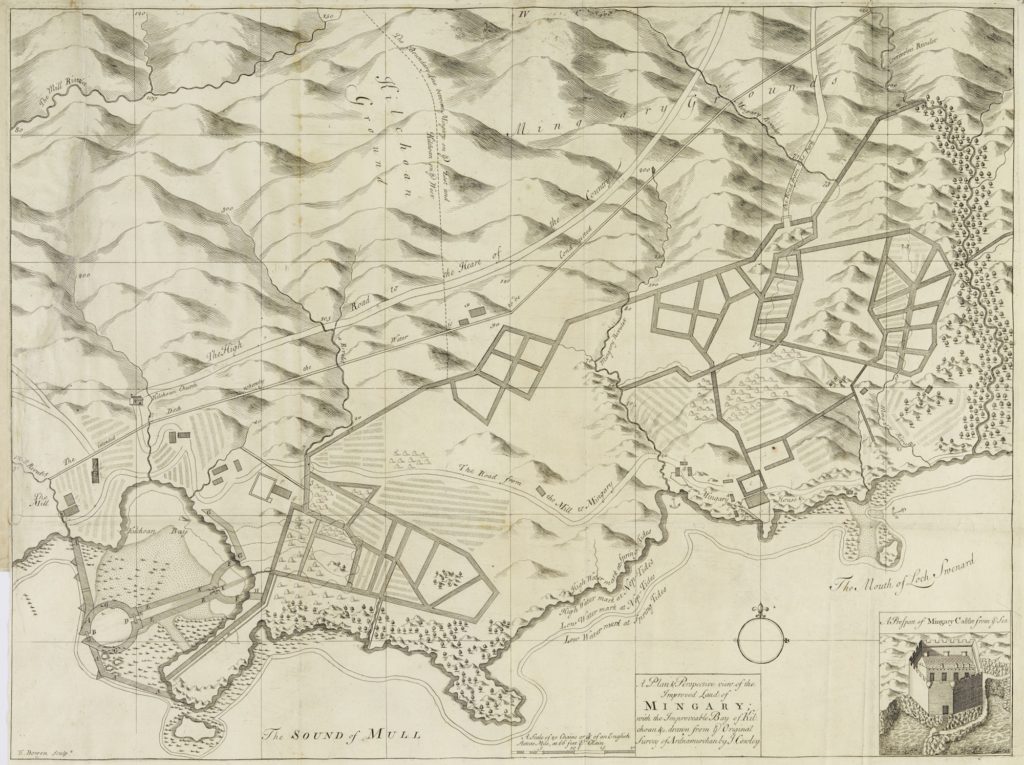 John Cowley’s map of 1734 [3], drawn to show the estate around Mingary Castle, is remarkably similar to Bruce’s but much more detailed. Drawn for the then owner of Ardnamurchan Estate, Sir Alexander Murray, some of it appears to be either fictional or wishful thinking, such as the ‘harbour’ in Kilchoan Bay. However, it does show much of the village in clear detail, such as the mill beside the Millburn, St Comghan’s Church and the manse, and the isolated farmstead along the track to Mingary Castle. A grid of extensive drainage works are also shown, and a large building with what appears to be a walled yard.

In a 1737 survey, again carried out on the orders of Sir Alexander Murray, Kilchoan is recorded as having eight families composed of 13 men, 12 women, and 10 children. 1,080 acres were tenanted, and were valued at 5 penny land. The people kept 60 cows, 16 horses and 60 sheep. Some of the tenants were named at the time as Alexander McDonald in 1737, and Donald McKenzie, John McColl, Duncan McKenzie and Donald McIllyvrie in 1739. [1]

In the description of the Ardnamurchan Estate on the eve of sale in 1767, Kilchoan is described thus: SW from Skinned at the distance of about 2 Miles on the side of a hill fronting the sea lies the Kirk of Killyhoan which was lately rebuilt & Slated & about it a Burial place but not inclosd. Betwixt it & the sea lies a small Farm of the same name with a very good Millhouse of stone and lime & slated about which are 5 or 6 acres of grass ground & 6 or 7 of Meadow or low ground betwixt it & the sea, included in which is the Minister’s Glebe which he has let at £5 per an. There is also a pretty good house on the Farm built for a publick house by Sir Alexr Murray – There is also some Limestone on this Farm-all these Farms is to be understood to have very large & extensive hill pastures there is a great deal of Ware all along this coast for Kelp. The Tennants use a good deal of it for that purpose as also for Manure for their ground, but there is no Fishery of any kind but some that the Tennants catch for their own use and by all accounts there seems to be very little Encouragement for erecting any thing of that kind. [1] 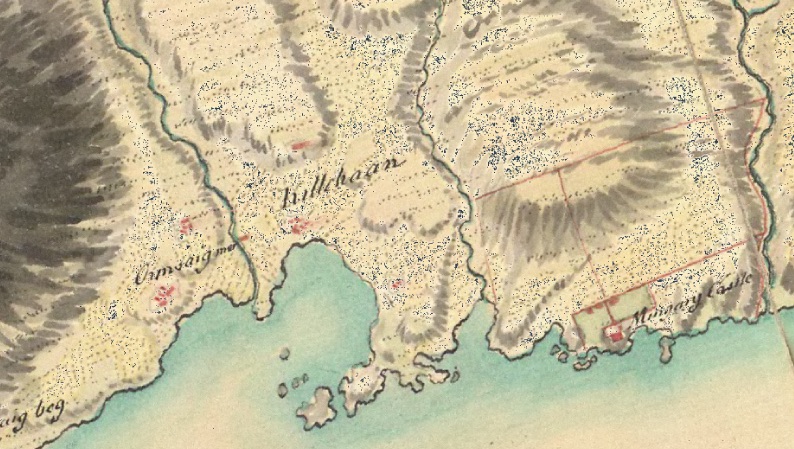 William Roy’s map of the area, a military map drawn up in the years between 1747 and 1752 following the ’45 rebellion, shows houses in ‘Killchoan’ in three areas outside the main village. A lone building beside the Millburm may be the water mill, while the building above the word ‘Killchoan’ is very likely to be St Comghan’s church. A third, to the southeast and roughly where Pier Road is today, may be the isolated farmstead seen in Cowley’s map, whose remains are still visible between Pier Road and Torr Solais. 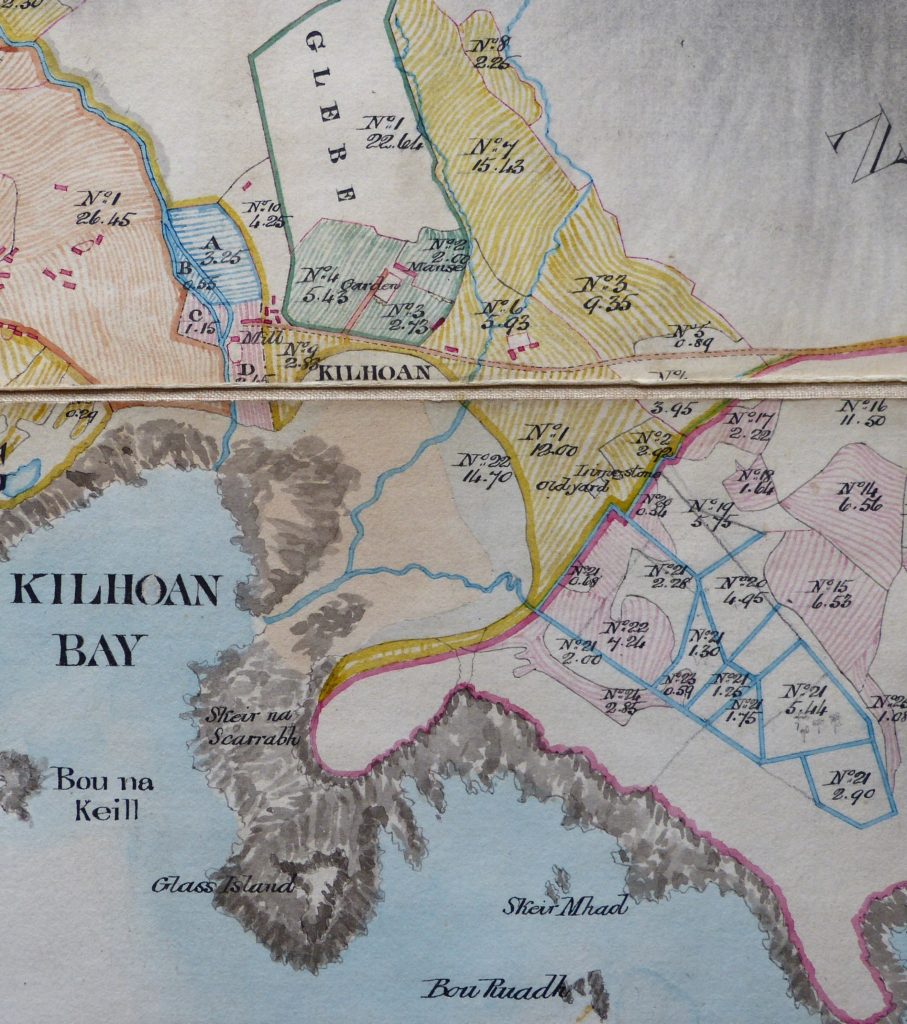 William Bald’s 1806 map [2], commissioned by Estate owner Sir James Milles Riddell some years before his trustees began clearing some of the settlements on the Ardnamurchan Estate, provides a wealth of detail about Kilchoan. The glebe, land allocated to the church, is shown extending across Glebe Hill, and, while the Manse is marked, there is no sign of St Comghan’s church just to the north of ‘Field 2’, which would still have been in use. The mill, standing in its own land, is marked, along with a small lake used to supply the mill race. It’s interesting to note that Kilchoan, today the largest township on West Ardnamurchan, in those times had relatively few houses.

Alexander Low, who conducted a survey of the Estate to accompany Bald’s map, describes Kilchoan as ‘a piece of pretty good low land’ and suggests that it has too few tenants so that, if it were divided into crofts, it could accommodate more – a helpful suggestion when Riddell was planning to clear other settlements.

At some point towards the middle years of the 19th century, the settlement was duly reorganised into a crofting township, with individual houses in tenanted areas of land – the crofts. While it is difficult to distinguish which land belongs to which croft – this is the 1872 OS map [3] – the number of houses has increased considerably, probably because a number of families were relocated to Kilchoan after their settlements were cleared. Today there are seven crofts which also have access to extensive common grazings to the north of the village.

On this map the ruins of St Comghan’s are shown, and the map shows that the part of the area immediately to the north of the church was not, at that time, part of the graveyard. The mill with its lake and mill race are there, and the Millburn lacks a bridge, so people had to cross it at a ford downstream from the mill. The Inn almost at the centre of the map is now Dorlinn House, while the buildings which are today used by Steading Holidays are immediately to its northwest. A Post Office is marked at the eastern end of the village.