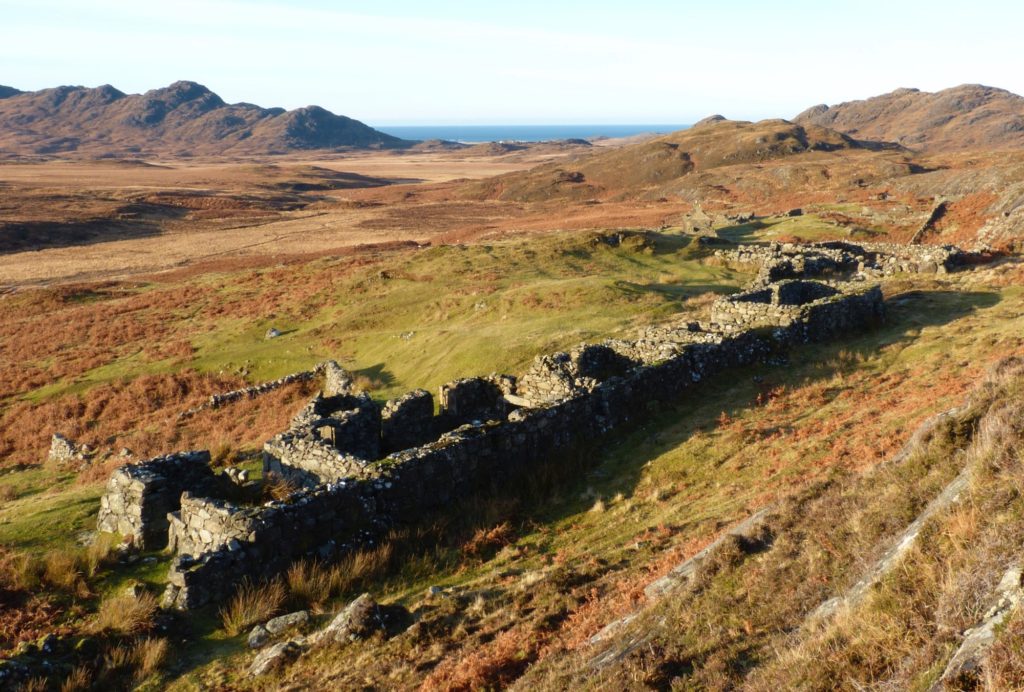 Glendrian is an abandoned crofting township in the centre of the Ardnamurchan peninsula centred on grid reference NM480687. It is a Scheduled Monument, Historic Scotland describing it as “of national importance because of its potential to contribute to our understanding of post-medieval settlement and economy. Although only abandoned in the 1940s the settlement incorporates information for the earlier expansion and contraction of the community who lived here. The buildings are varied in date and style and contain evidence for the complex history of settlement on the site.” [1] 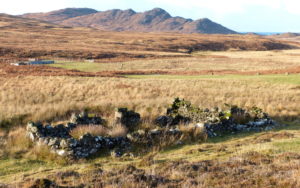 Glendrian’s lands occupy the eastern half of the low land within the circle of hills formed by the main ring dykes of the Ardnamurchan Tertiary Volcanic Complex. The houses vary from small, rounded-cornered but-and-bens (left), most with one or more windows, to gabled buildings with chimneys at both ends and harled exteriors, one of which has two storeys. A separate file, which can be downloaded here, lists all the structures; it is a combination of the survey done by West Coast Archaeological Services and the author’s observations. 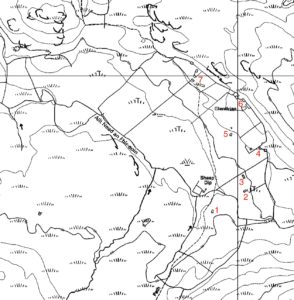 On this OS map seven groupings of buildings are identified. Numbers 1 – 3 are single buildings, some with attached byres, almost certainly all at one stage dwelling houses, while 4 – 7 are composed of mixtures of dwellings, byres, barns and other buildings. In addition, there are enclosures for animals, at least one kale yard, a garage, shieling huts, and a possible corn drying hut. The ‘sheep dip’ is modern.

The picture below shows the main buildings, 7 on the map. This was the site of the original settlement of Glendrian, the other buildings developing after the settlement had been reorganised into the crofting system.

The dwelling house at centre, the only one with two storeys, was the last to be abandoned. It shows several stages of development, having started single-storey with rounded corners.

The picture looks almost due west. The buildings in the right distance are Lower Sanna. 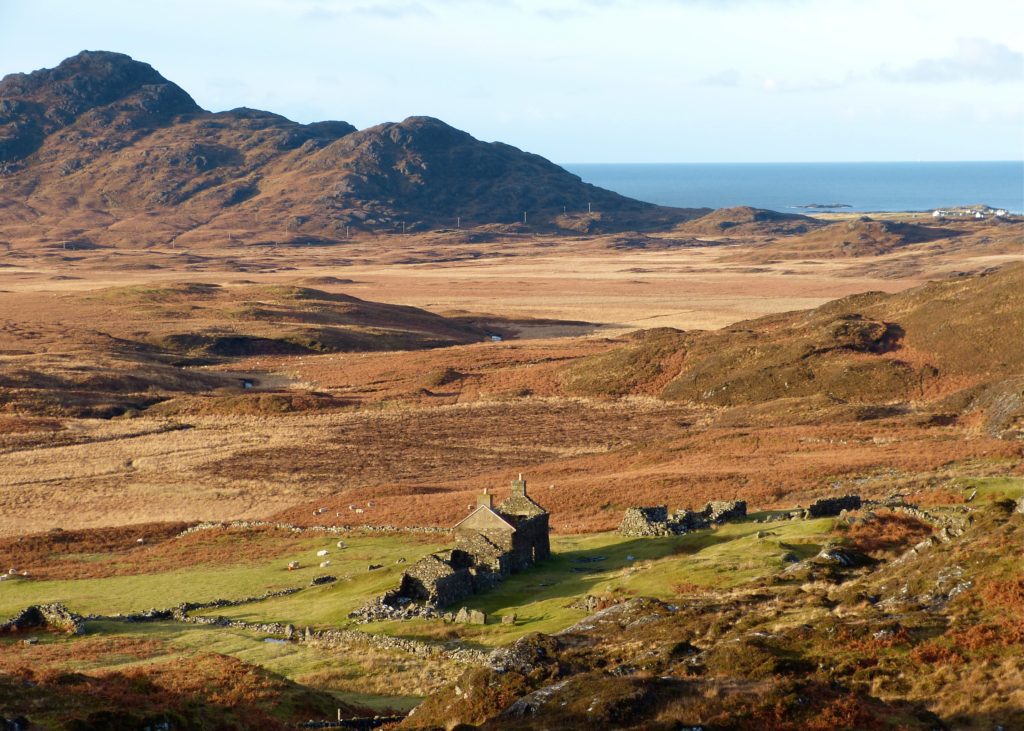 The name Glendrian derives from the Gaelic Gleann an  Draighinn meaning ‘blackthorn glen’ [2]. The first written reference, in 1619, is to the tenant, Allester McEan Voir VcEan, living in ‘Glendreane’, who was one of the MacIains involved in depredations against Donald Campbell of Barbreck and besieging Mingary Castle [3].

In 1667 the Earl of Argyll’s possessions were listed as including “…, the 2½ merk lands of Auchinhaw and Glenindryane…” – ‘Auchinhaw’ is probably Achnaha. [4]

The earliest map is Alexander Bruce’s map of 1733 [6], left, which shows the settlement as ‘Glendrien’. The ‘improved 64 acres’ of ‘Moss of Glendrien’ is the large area of drained marshland which is clearly visible today to the northeast of Achnaha. Itwas part of the works undertaken on the instruction s of the then Ardnamurchan Estate owner, Alexander

Alexander Murray, in his 1737 survey of Ardnamurchan, states that ‘Glendrien’ had six families and a total population of 29, comprising six men, eight women and fifteen children. Its land covered 2,220 acres, high compared to other local settlements, and the ‘penny land’, a measure used in calculating rent, was five, average for West Ardnamurchan. Its tenants are given as Duncan McEacharn (¼ of the five penny lands), Patrick McIlvraw (¼), John McLachlan (⅛), Dougald McIllvraw (⅛), Donald McDonald (⅛) and Duncan Henderson (⅛). On its pastoral land the tenants were permitted to graze up to 48 cows, 16 horses and 48 sheep.

Roy’s Military map of 1747 has no record of Glendrian, though Achnaha is marked. As far as the rest of West Ardnamurchan is concerned, Roy’s map is remarkably accurate, so this is either an interesting omission, or Glendrian had been temporarily abandoned. 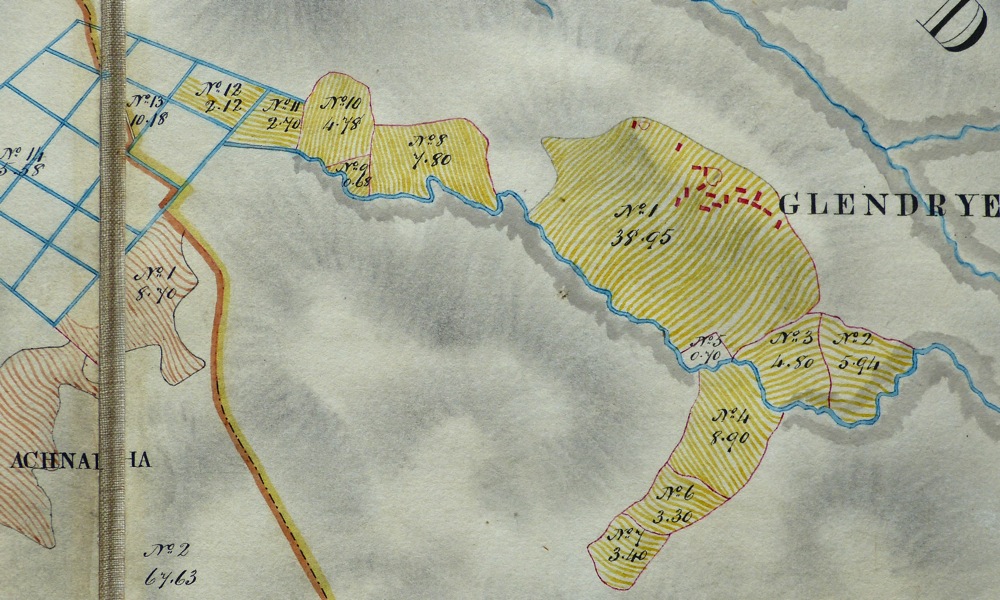 Bald’s map of 1806 [7] has the settlement marked as ‘Glendryen’. While his maps don’t show the trackways, they do record the individual buildings in each settlement. The records that Bald made state that the settlement had 2,047.52 acres with 53.83 arable, 34.85 cultivated with the spade, and 1,958.84 moor and pasture. Its tenants, according to Alexander Low’s follow-up account written in 1807, were John McLauchlan and 5 others. He also notes, “Part of the arable ––d of this farm is very good. The hill part is very bare and rocky. The lower pasture subjects the cattle to the above-mentioned a–– …. [*] get free of which both this and the last farm [Achnaha] should be joined into one for a sheep –– which would increase their value.”

*This is a reference to Achnaha, where he states that the cattle are “hurt by the C–ban”. Damage to the manuscript means that the word cannot be read, but it may be ‘gnoban’ or ‘groban’, which is in Dwelly’s Gaelic – English dictionary as ‘swelling’ [Mary MacLeod]. Analysis of a soil sample taken recently at Achnaha by Rob Gill shows that the land is slightly high in copper but that, otherwise, there are no serious contaminants or deficiencies.

As Bald noted, Glendrian’s common grazings extended across a large area, running up to the north coast. Here, quite separate from the main settlement, are a group of four small fields, numbers 15-18. They are close to an inlet, Port Eigin-aig, which has the remains of a stone jetty. This may have been Glendrian’s ‘fishing port’, the fields worked by dedicated fishermen who lived and worked land by the port, but the site is very cut off from the settlement – the track between is poor.

The western end of the settlement’s land extends into the blue grid of ditches marked on Bruce’s 1733 map as ‘Mofs of Glendrian’, noted as ‘Improved 64 Acres’. That most of these are, by 1806, on Achnaha land might suggest a change in land apportionment between 1733 and 1806.

Bald’s map marks seventeen buildings, with two enclosures. With the exception of two buildings to the north, they are, in the manner of local settlements, more closely grouped than those on the ground today. I cannot match any against today’s but, as Bald’s map is an economic map, exact building locations are unlikely to be accurate. On the other hand, fields and walls are very accurately marked, and can still be traced on the ground today. The three fields to the south of the stream (Nos 4 – 7) are shown as being used. 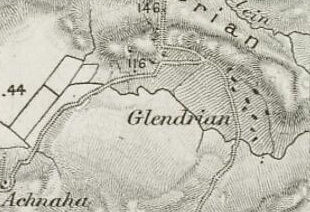 The first OS map, on a 1:63360 scale, printed in 1856 [6], shows ten structures still grouped together in the same way they were in Bald’s 1806 map, when they had the nucleated structure of a typical settlement. Only one NE-SW trending wall, suggestive of an alteration to the crofting system, is shown within the worked land. Both these suggest that the land had not yet been fully reorganized into crofts. Bald’s worked fields 4, 6 and 7 aren’t marked as worked in the way the main fields are, suggesting they had fallen out of use. While today we tend to approach Glendrian along the Ardnamurchan Estate track from the west, this first OS map shows that the main access to the settlement was along a track that runs south, passing to the east of Druim Liath, a route that can still be followed. It joined the Achnaha-Kilchoan track near Creag an Airgid.

The 1861 census records ten households occupied by 24 males and 23 females. This suggests that all ten buildings marked on the 1856 map were houses and that non-dwelling buildings either did not exist, were of a temporary nature, or weren’t recorded. All heads of households were described as ‘Farmers in common’ but other adults were idtified as ‘Agricultural labourer’ (four) or ‘Domestic Servant’ (four), though it isn’t clear whether their work was within the settlement or outside. This census follows the second round of evictions on Ardnamurchan Estate, the Swordles being cleared in 1853. The population of Glendrian was now at its peak of 47. 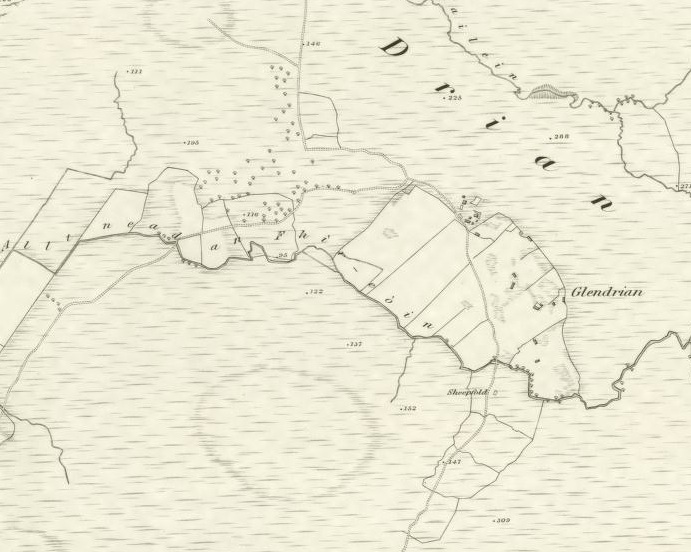 The 6″ OS map of 1872 [6], above, shows twenty buildings of which three are roofless. The buildings are more scattered, and the old inbye open field is divided into rectangular areas which suggest that the township is now crofted. The northern cluster of buildings are shown outside the head dyke which surrounded the arable land. The ‘sheepfold’ beside the access track to the south of the settlement still exists on the ground. The map shows the surrounding fields, Bald’s 4, 6 and 7, as enclosed but marked as moorland.

That the population was falling is confirmed in the 1881 census: it halved in twenty years to 20, composed of 10 males and 10 females gathered into 5 households. All were born on Ardnamurchan. Three are listed as crofters, two as scholars, two as agricultural labourers, one as farm servant, one as general servant, and two were paupers, both women, one living alone, one with her son. The revised OS map of 1897 shows that some buildings had disappeared – though at least one of the ‘missing’ buildings is visible on the ground today – and that more had been abandoned. Only eight are marked as roofed. The line of the header dyke at the north of the settlement has been changed to bring the northern group of buildings within the arable area, and a new track has been formed. Some croft field walls which appear to have been incomplete in 1872 have been completed.

The continuing fall in population is confirmed in the 1901 census: 11 people occupied Glendrian, 6 male and 5 female, in 3 households. Two are recorded as farmers, two as crofters, and one as a ‘Worker’.

By the late 1930s the population was reduced to two families, the Hendersons in Building 6 and the MacLachlans in the gabled building 7. Donald and Mary Henderson’s son Angus was born in 1940, soon after which the family, which included Donald’s mother, Annie, moved to Kilchoan, probably in 1941. When John MacLachlan died shortly afterwards, his widow moved to Achnaha to stay with her nephew, Archie Henderson, at The Old Dairy, so the village was deserted.

In 1948 large areas of the Ardnamurchan Estate were sold off, but Glendrian was retained, possibly because the land was poor but useable as part of the shooting estate.