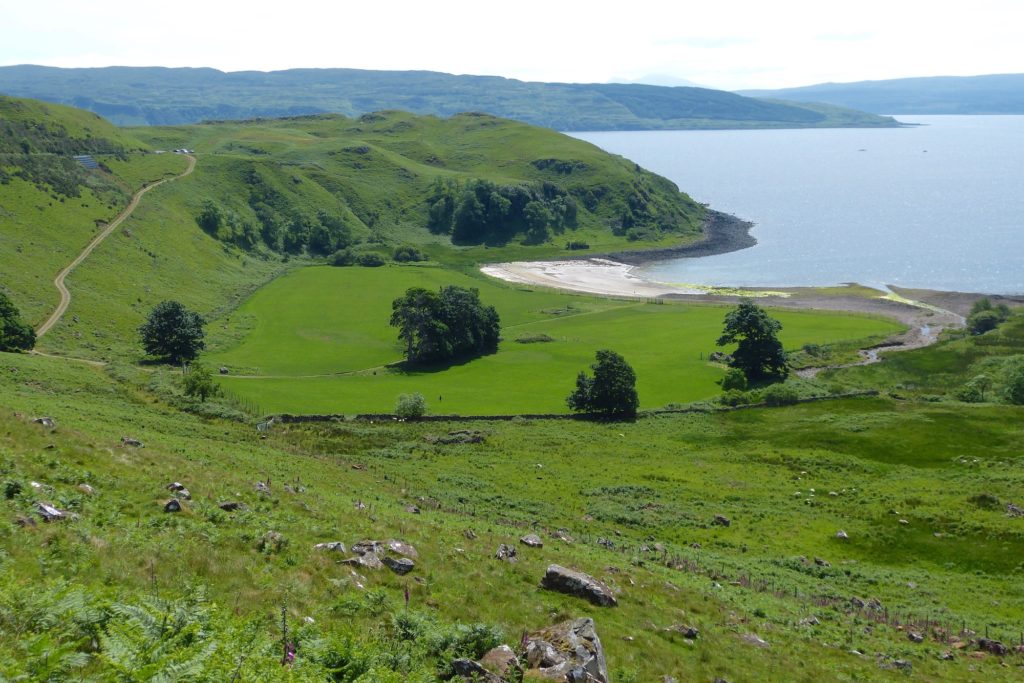 The bay we know as Camas nan Geall has been occupied for at least 5,000 years, since Neolithic times. The chambered cairn is of this age, while the standing stone by Cladh Chiarain, the Campbell graveyard, is assigned to the Bronze Age (4,000 years ago), although it was later engraved with images including a Christian cross and, above it, what may be a dog. These carvings may date to the time of the coming of St Columba, after he began his west coast journeys in 563AD and founded the abbey at Iona. At the roadside 200m east of the car park, water from a spring, known locally as Tobar Chalum Chille (tobar well, Colum Columba, cille church or cell), falls across a stone wall.

Towards the end of the 8th century the Vikings arrived on this coast, first as raiders and later to settle. It is inconceivable that they did not use this protected haven to pull up their longships, yet evidence of Viking occupation has yet to be found. Further, the name is not Norse, though the meaning of the Gaelic is disputed – the bay of the stranger, the bay of the pledge, promise or wager, and the bay of the churches are all suggested. 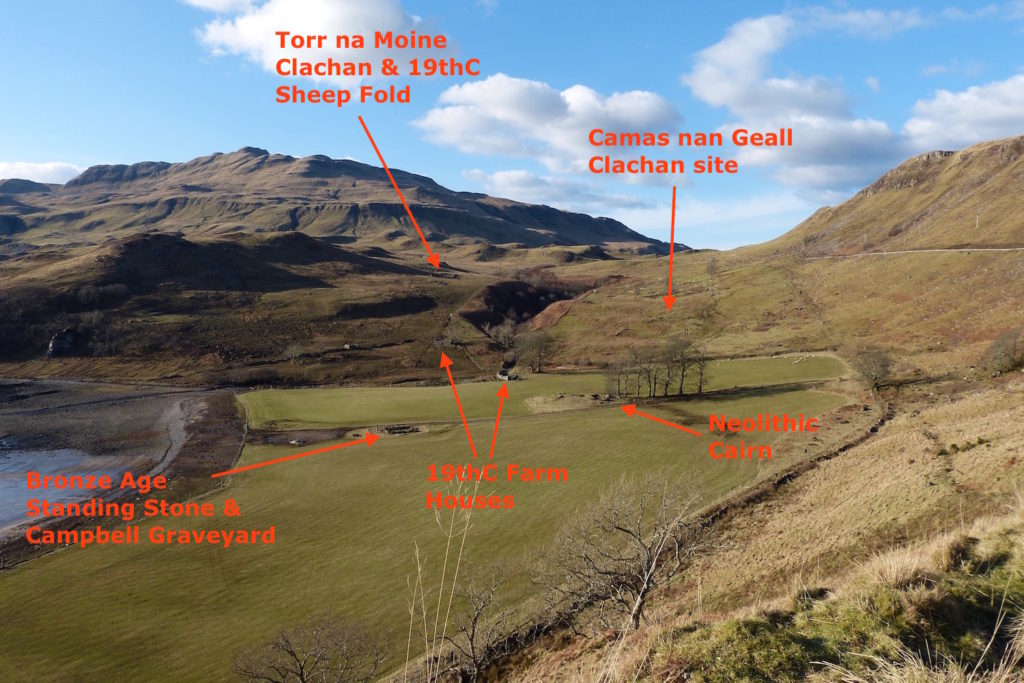 In the hundreds of years following the absorption of the Vikings into the population, both the bay area and the rough area to the northwest of the bay were occupied by a small communally-run settlement. We know little about the early history of this community but we do know that, during the Lordship of the Isles, it was part of the lands of the Clan MacIain. This clan held Ardnamurchan and Mingary Castle from the early 14th until the early 17th century. Camas nan Geall would have been little different from the twenty-three other settlements within the clan’s lands in Ardnamurchan. Each had inbye land – arable land close to the houses – where crops were grown, and extensive common grazings which were used for summer pastures. In Camas nan Geall’s case, the common grazings extended north as far as Loch Mudle. The settlement contributed, mainly in the form of agricultural produce, to the upkeep of the MacIain chief and his retinue, and provided men for the clan’s army in times of war.

In 1541 the principal tenant was Donald McAlister McKane and, in 1618, at the time when the MacIains were losing their lands to the Campbell Dukes of Argyll, the principal tenant of Camas nan Geall was Alexander McRonald VcEane, while in 1686 it was held by Donald and Anna Cameron and Neill McOnlea. [1]

Following the suppression of the Jacobite rising of 1715, a record was kept of the men of each settlement who were called to surrender their arms at Mingary Castle in April 1716. Since men from both sides of the conflict had to attend, the nine men listed from Camas nan Geall give us some idea of the settlement’s population.

In 1737 Camas nan Geall was in the hands of Alexander Campbell of Ardslignish, who raised at least two of the gravestones in Cladh Chiarain. From records prepared in the same year for Alexander Murray, Lord Stanhope, to whom the Duke of Argyll had sold Ardnamurchan, we know the settlement had a population of 35 – 9 men, 13 women and 13 children – with approximately 72 cattle, 72 sheep and 18 horses. 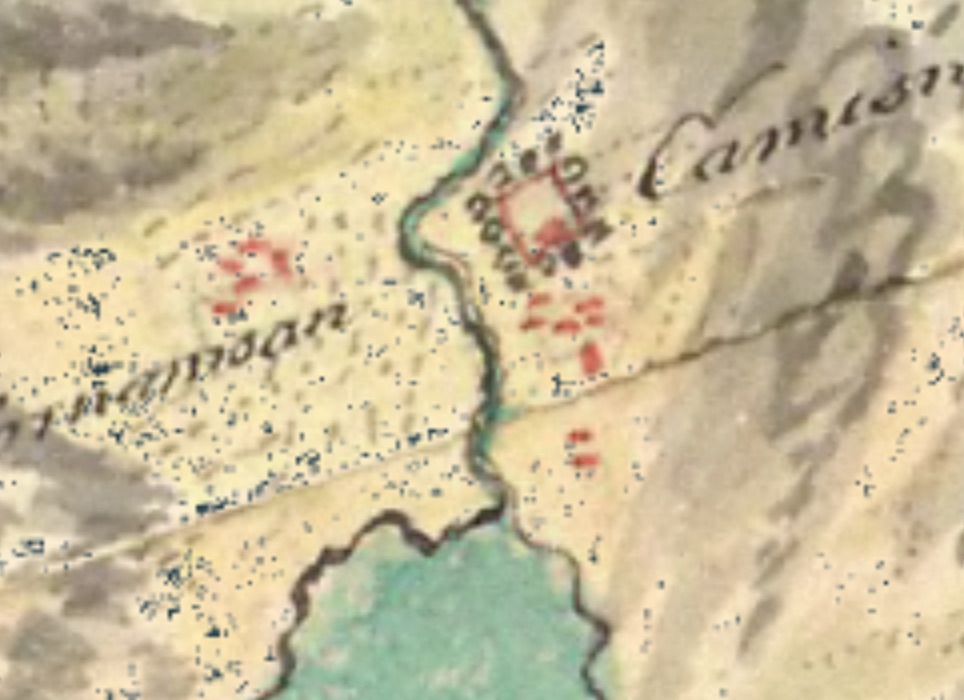 By the mid-1700s, when William Roy drew his ‘military map’ [2], there were no houses in use in the rough ground to the northwest of the big field, and only a few in the area to the south of the neolithic cairn. This suggests that much of the settlement had already been cleared while the land was being worked by Alexander Campbell as a tenant farm. A square is marked, perhaps a wall, surrounded by trees, with a large building at its southern end. This may have been the Campbell’s dwelling, which some have suggested was called ‘Tigh Ban’, the white house, which further suggests it may have been hardled and whitewashed. [1]

in 1767 an anonymous writer wrote of Camas nan Geall, “Here a Gentleman lives  of the name of Campbell, a half pay officer who has good houses some of them built with Stone & Lime, above the houses is a most Excellent Glen for pasture of all sorts & of great extent & hard by them there are about 5 or 6 Acres of arable Ground in the midst of which is a burial place where there are some stones with inscriptions” [1] 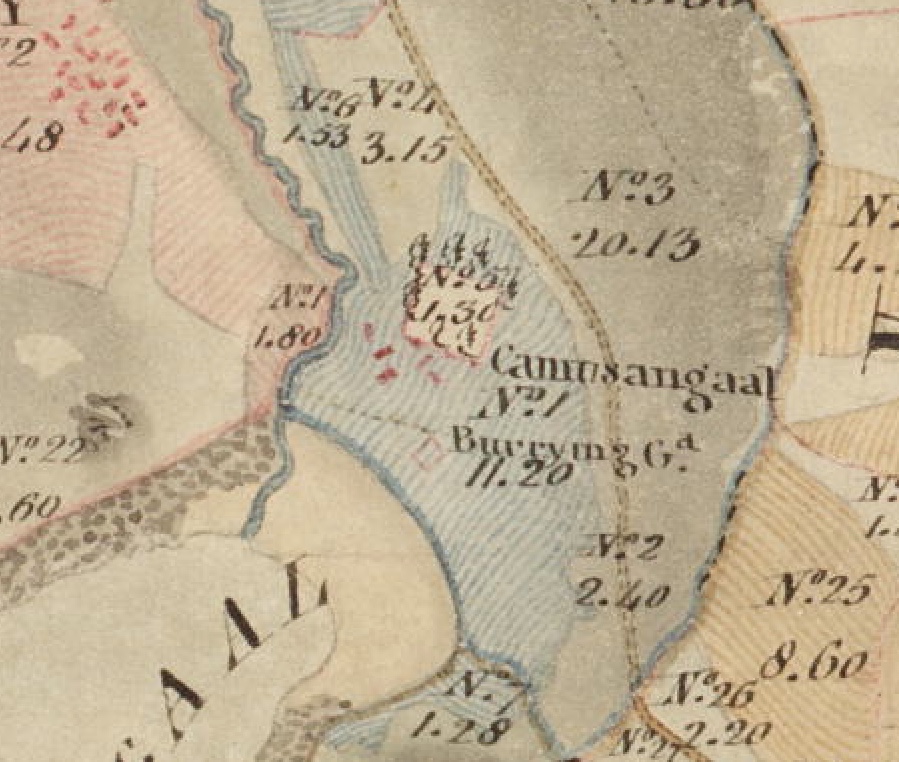 Later, after Lord Stanhope had sold it, Ardnamurchan Estate came into the hands of the Riddell family. During their ownership, William Bald drew a map of Ardnamurchan from which the above is an extract [2]. It confirms that the area of ground occupied by the settlement (fields 4 & 6) had been cleared of buildings, and that, while the wall and surrounding trees remained, the large house shown on Roy’s map has disappeared. The Cladh Chiarain ‘burrying ground’ is marked.

In 1807, as a follow-up to Bald’s map and at a time when the trustees of the Estate were struggling with its financial difficulties, Alexander Low surveyed the Estate lands, and wrote of Camas nan Geall (34) and Ardslignish (35):

In 1828, under Sir James Milles Riddell, at a time when Camas nan Geall was held by Lachlan MacDonald [1], the settlement, along with Torr na Moine and Bourblaige, was finally cleared of any remaining residents to make way for a sheep farm, although some men may have stayed on as shepherds. Lachlan lost the tenancy in 1829, having held it since 1811. The sheep-farming tenant who replaced him was called MacColl. 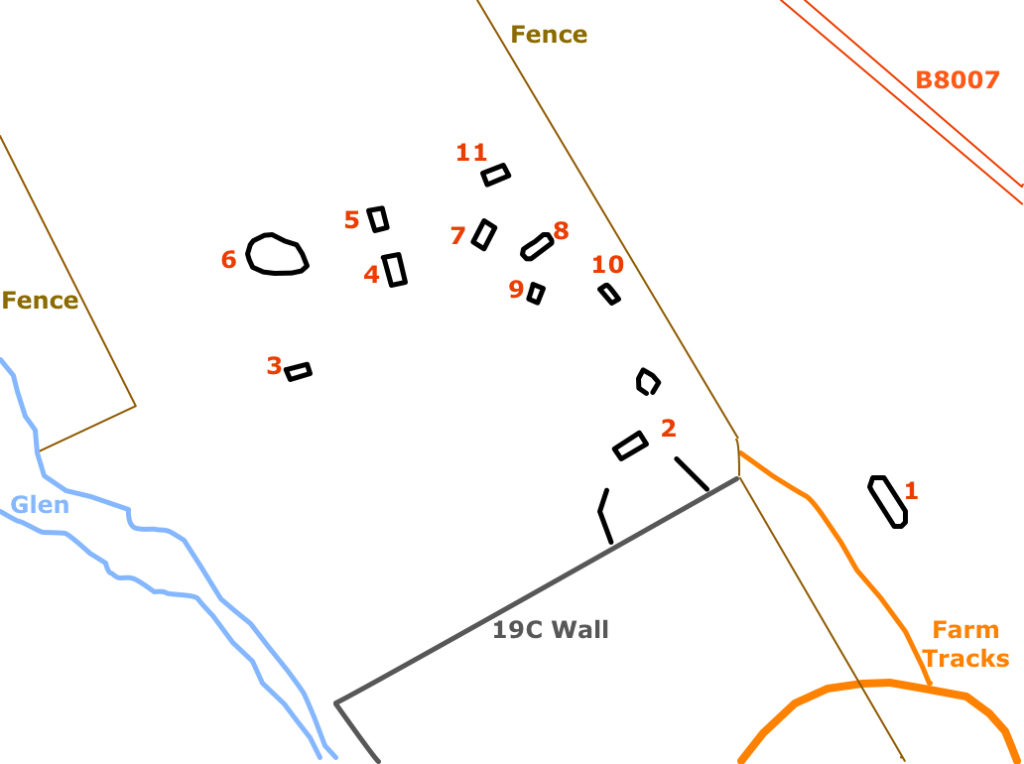 Members of AHHA have been working to clear the sites of the main settlement buildings, and have prepared the above map. Structure 6 is a sheep fold which is roughly circular and may be pre-18th century. Structure 2 is probably a 19th century dwelling built on top of a pre-extisting settlement house, and may have housed one of the shepherds who worked on the sheep farm. Most of the other structures are typical settlement dwellings and byres, possibly rebuilt in the 18th century, but some of the buildings are strikingly different, of which building 1 on the map is an example, and these may be older dwellings. 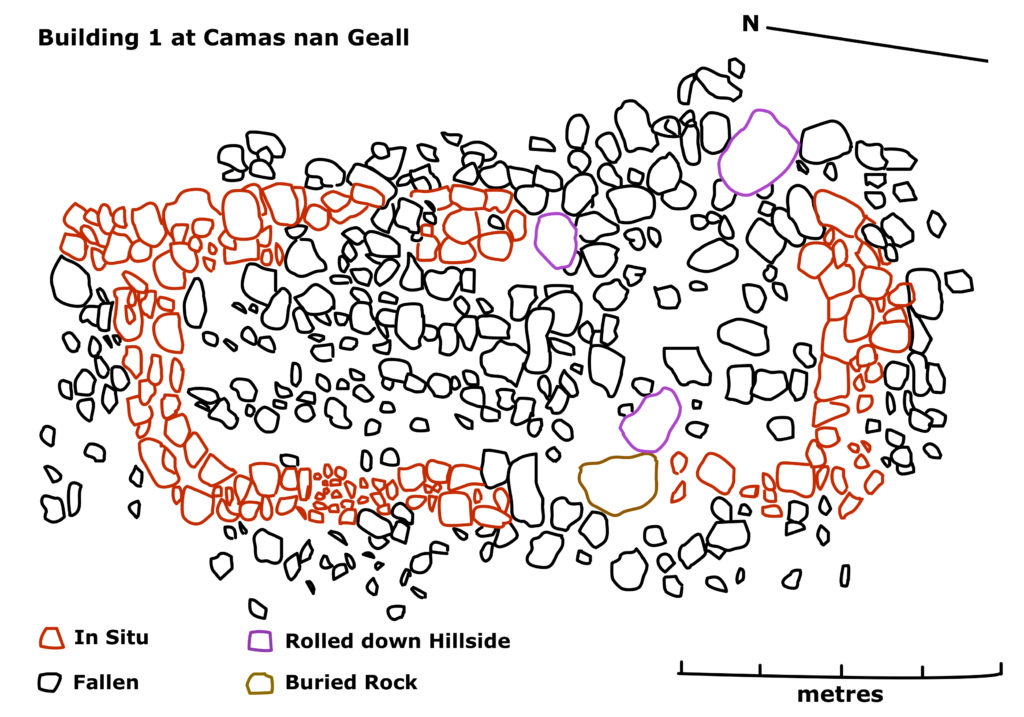 AHHA members have drawn a plan of structure 1, whose unusual features include the curved shape of the end walls and a sunken floor. That three boulders have rolled down the slope into the building may also be an indication of its age. 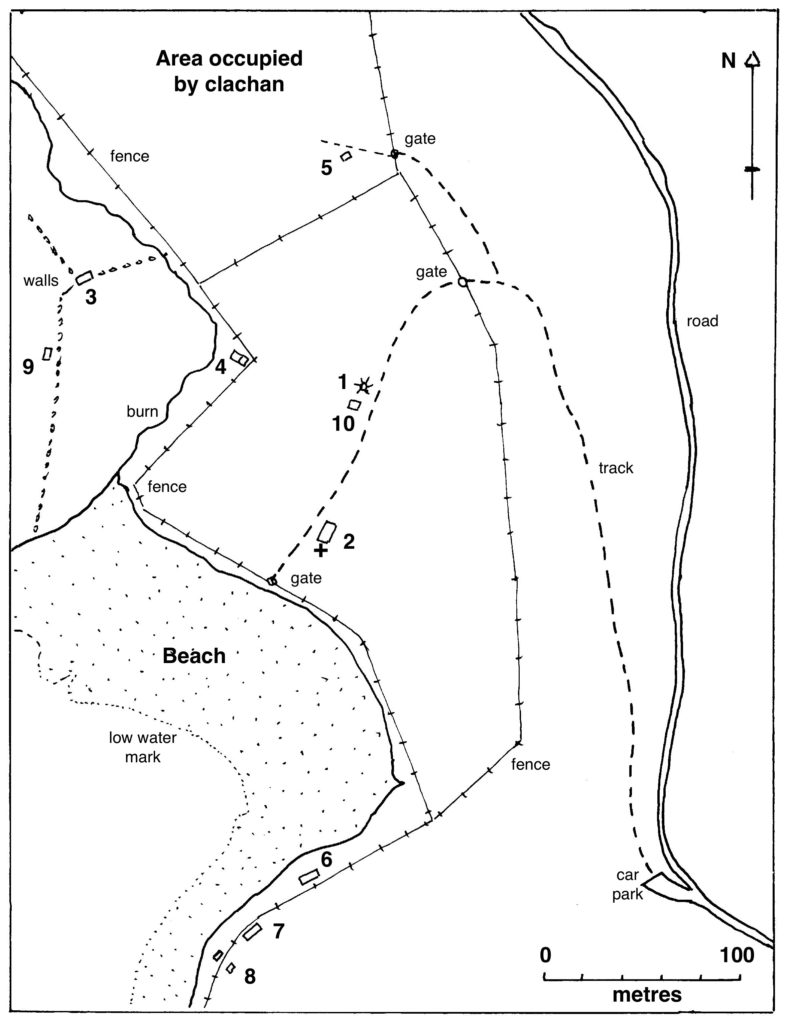 This map shows the buildings which are associated with the 19th century sheep farm which was developed by the new tenant after the 1828 clearance of Camas nan Geall, Torr na Moine and Bourblaige to form a single farm..

Buildings 5, 6, 7 and 10 are simple, and may have been occupied by workers on the farm. They are straight-edged and round-cornered, chimneyless, with hipped roofs supported by cruck couples – essentially, wooden A-frames. 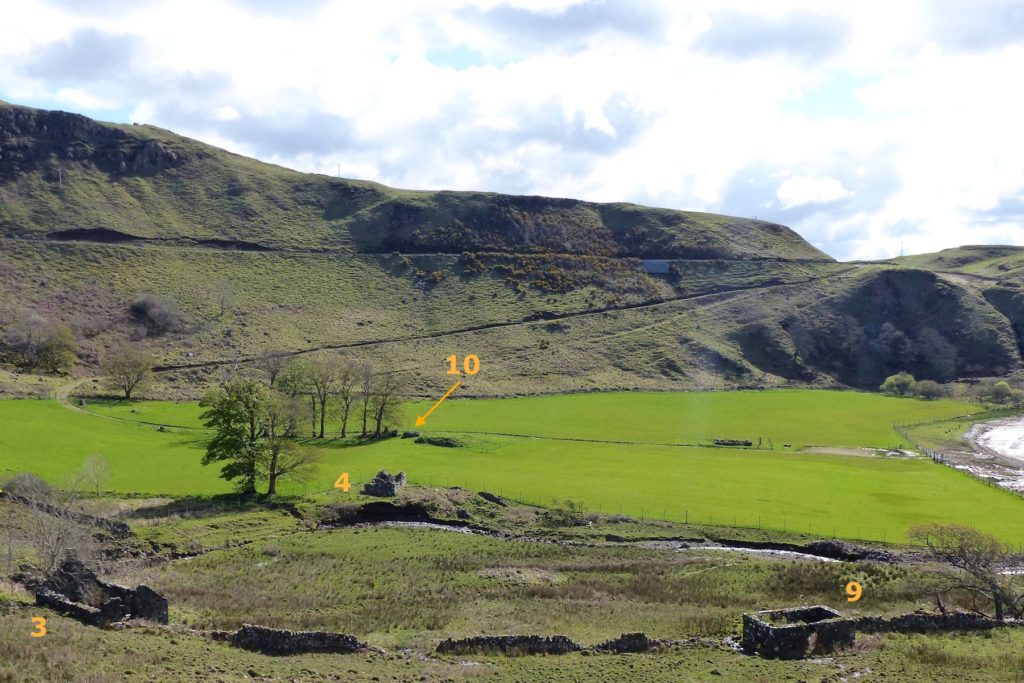 The finest are buildings 3 and 4, stone-walled houses with right-angled corners, mortared walls and gable ends. Building 3 measures 12m by 7m, had a slated roof, a big fireplace, and a fine view eastwards across the bay. Building 4, beside the burn, is larger, with two rooms. One of these may have been the home of the tenant of the sheep farm, but we do not know which.Building 9 is square, compact and substantially-constructed with a low entrance point in its north wall. It may have acted as a store house. 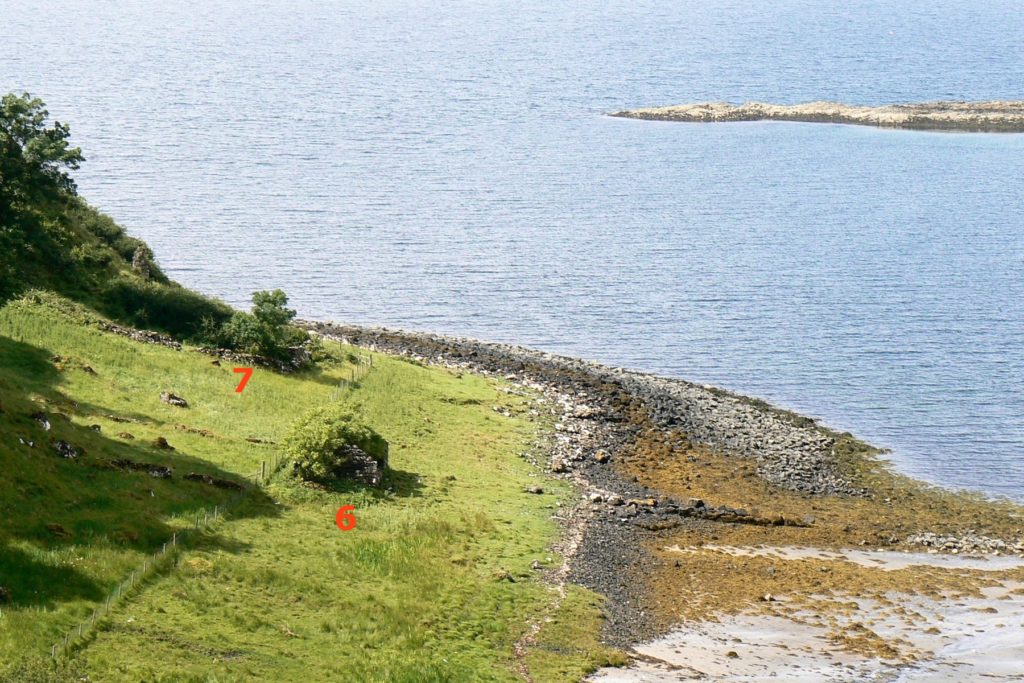 The house, 6, standing close to the shore on the east side of the bay, has what appears to be a stone wall 30m long built out into the bay in front it. This protected an area some 10m across on the sheltered side where a ship could have come against it at high tide. Beyond the next, smaller building, 7, are two byres, 8. Behind these, on the hillside, is what might be another standing stone. 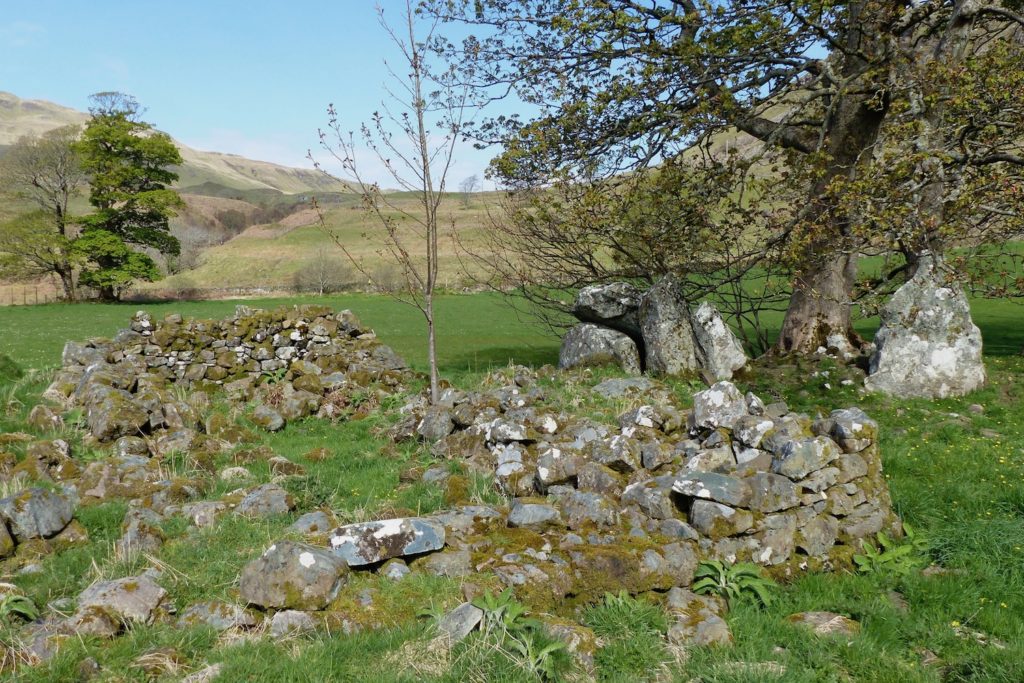 Building 10, beside the chambered cairn (1), was still in use in 1872 – see map below. There are suggestions that it may have been on the site of an original chapel, though there are also suggestions that a chapel existed within the Cladh Chiarain graveyard (2). The use of building 10 as part of the sheep farm is unclear, although, from its dimensions, it may have been another dwelling. 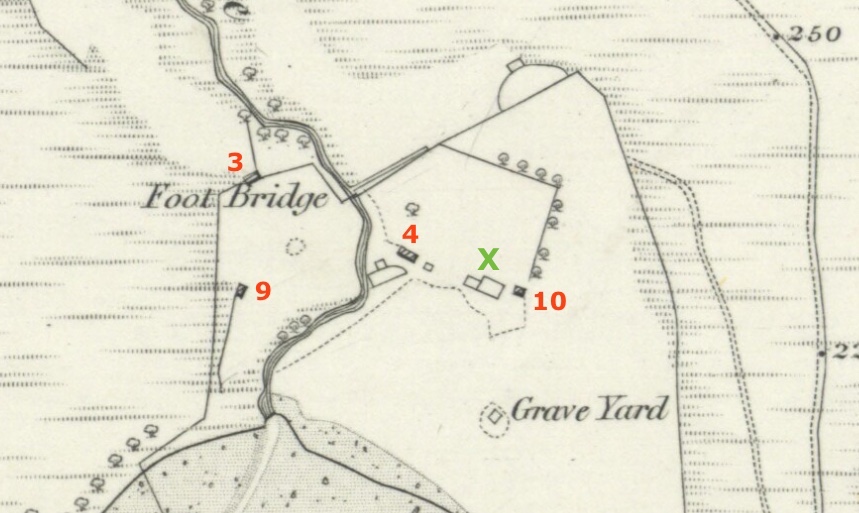 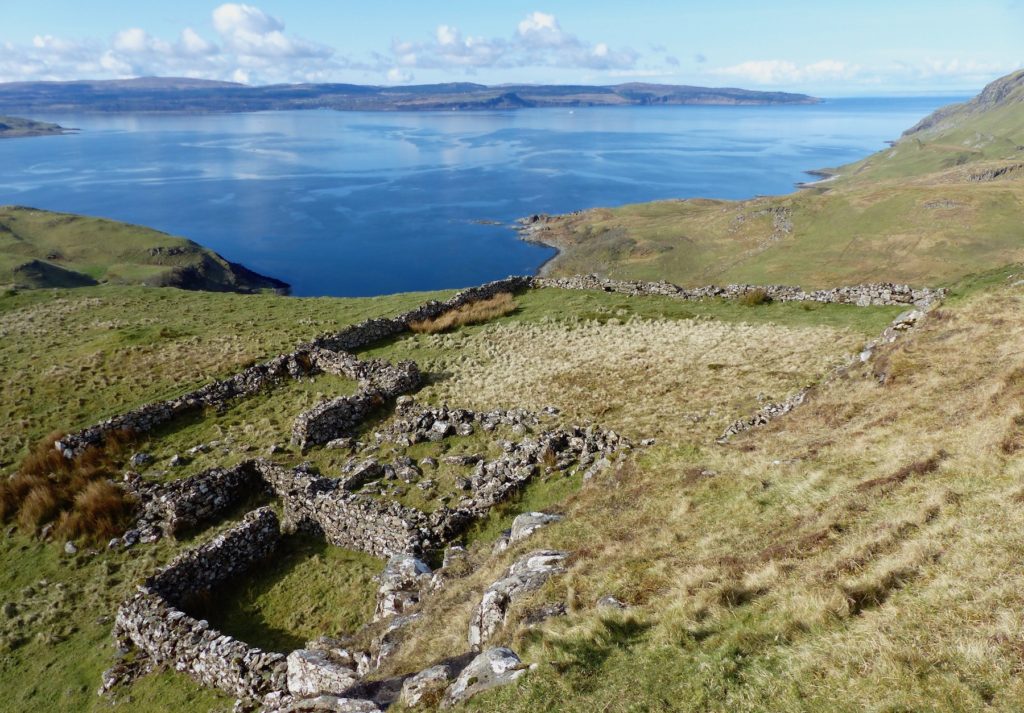 On the top of the steep hill to the northeast of Camas nan Geall is this large sheep fold, built for the sheep which roamed the land to the north of the farm. A similar fold was built on the site of the settlement of Torr na Moine to the west, the stones of the houses being used to build the walls. This fold served the sheep which roamed the Torr na Moine and Bourblaige settlement lands.