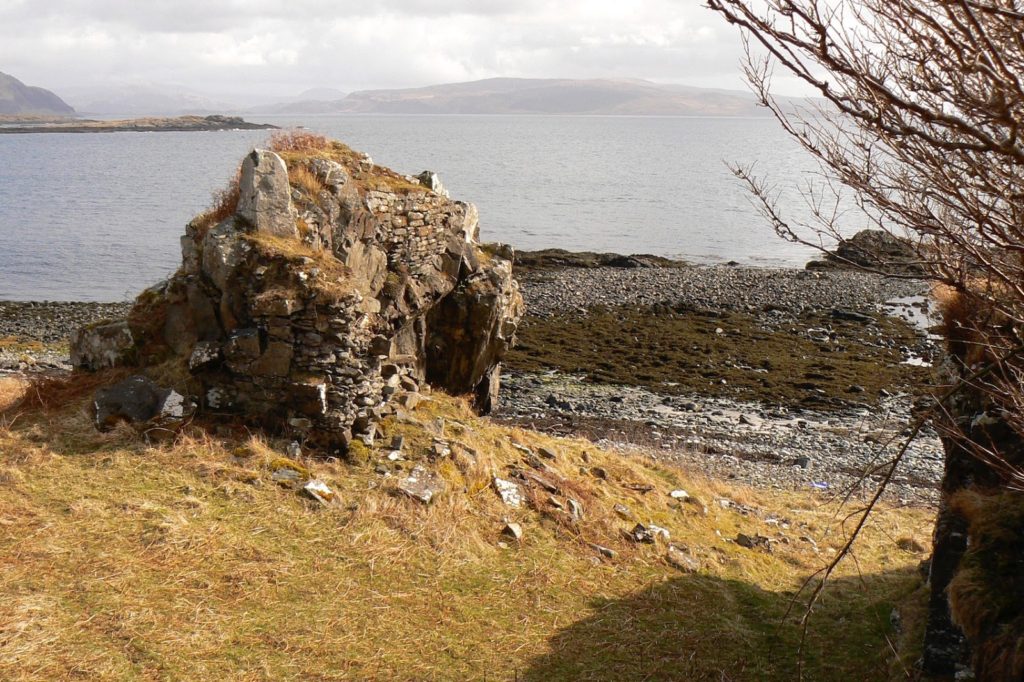 Caisteal Dubh nan Cliar, the Black Castle of the Minstrels, stands on the Ormsaigbeg shore below Iain Cameron’s croft. The coastline there is a low cliff broken by cuts down which small burns flow, places of wildflowers in summer. The ‘castle’ is sited beside one of these little glens, built against the western side of a natural rock outcrop which forms a small, steep-sided knoll, its flanks covered with rubble that has fallen from the structure. Historic Environment Scotland’s Canmore site – here – says, “its original form is uncertain, but it probably comprised a small two-storeyed tower of irregular plan measuring about 5.5m from NW to SE by 4.6m transversely.”

This picture looks at it from the west, the side on which most of the stone walling was built. The purpose of the upper section of wall isn’t clear, unless it was to level off a platform on the top of the knoll. The lower wall to the left goes round onto the north side, and encloses…. 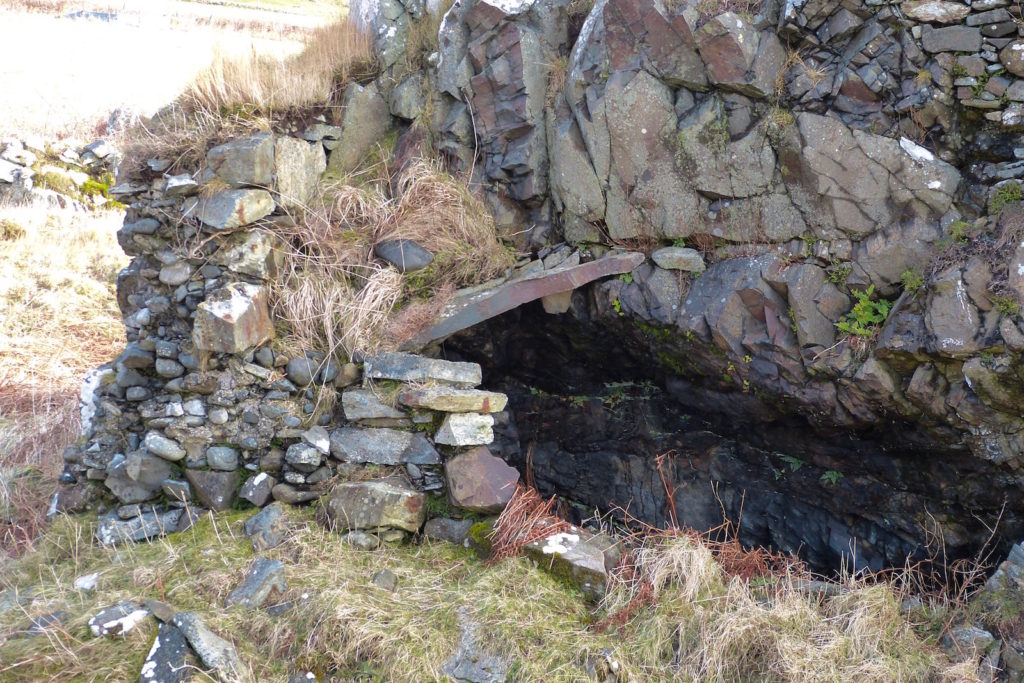 ….a low-roofed chamber. Its roof, much of it fallen, was formed of long, lintel stones or slabs, and its outer walls are still mortared in places. The Canmore site says, “This chamber measures about 3.1m by 2.2m and the roof, which comprises slab-lintels supported on corbel-courses, rises to a height of about 1.8m.” It continues, “In the SE wall there are the remains of a rebated entrance-doorway, which appears to have been secured by a draw-bar.” This isn’t there any more, having collapsed, though part of a mortared wall lies on its side. 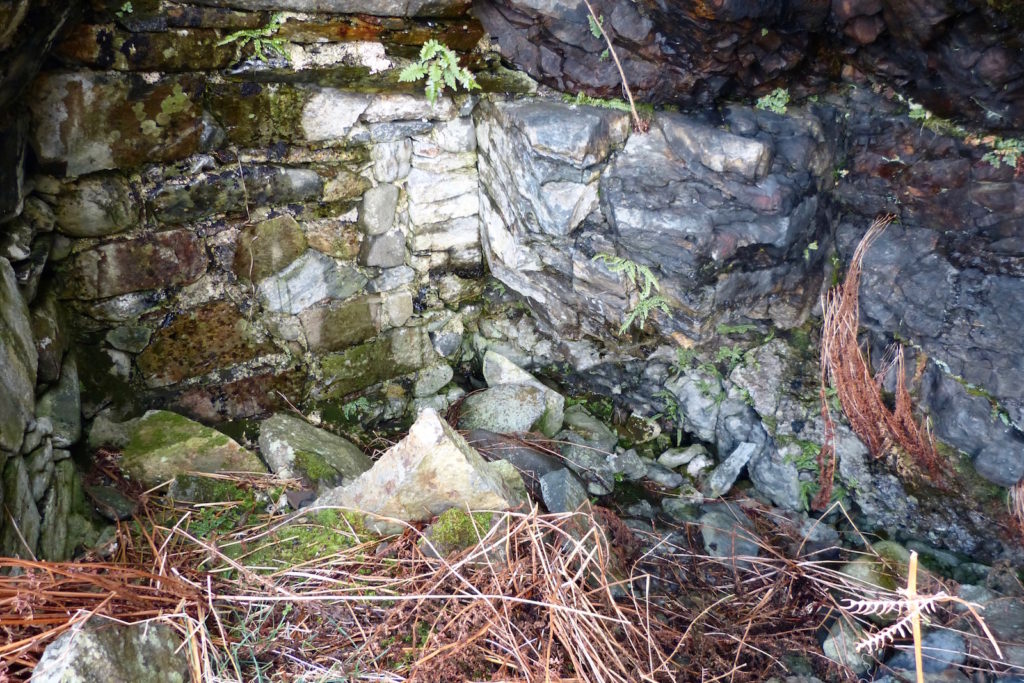 This is a view of the inside of the chamber, showing both the quality of the stonework and some of the mortar.

The Canmore site continues, “All the masonry is of random rubble bound together by coarse lime-mortar. The age of this building is uncertain, but it may tentatively be ascribed to the 16th or 17th century. It seems too small to have been a permanent residence, and it is possible that it served as an outpost of Mingary Castle, securing the anchorage is Kilchoan Bay. In 1838 (New Statistical Account [NSA] 1845) it was described as ‘the remains of a very small tower, dignified by the name of “Castial due nan Clior”, the black Castle of the Minstrels.” 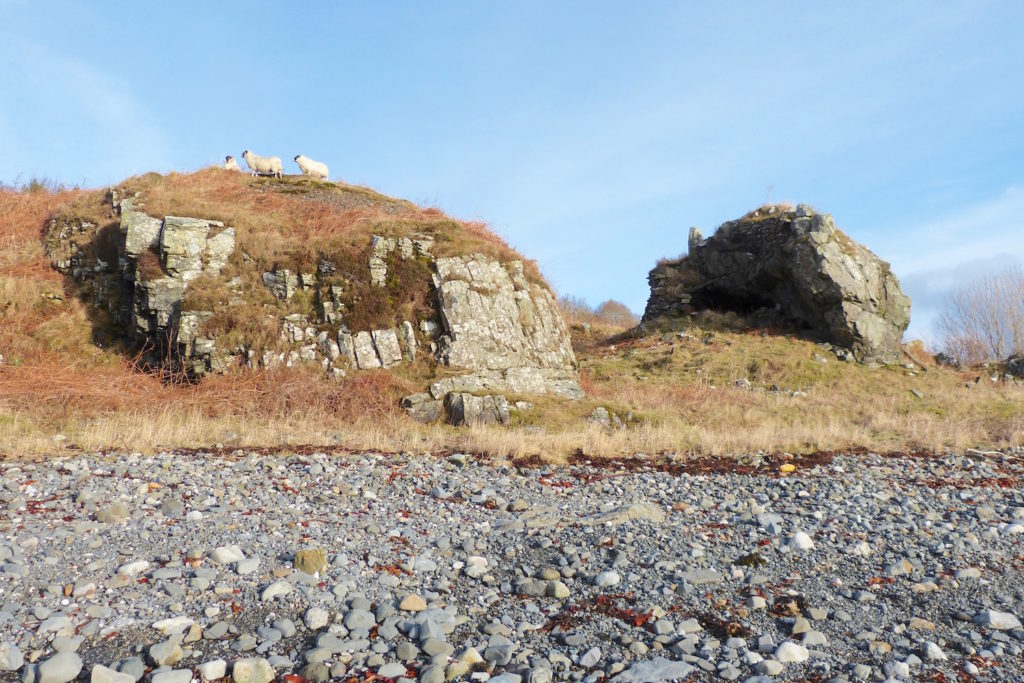 For several reasons, it seems an unlikely fortification. No more than two or three soldiers could have occupied it, and even they would have found life very cramped. Further, it is hardly in a good defensive position. It’s at the back of the beach, the cliff top to its immediate west directly overlooks it and, even from its summit, it doesn’t have much of a view. There are far better sites, at superior elevation and with sounder natural defences, within a short distance – for example, the cliff top at Maol Buidhe, at the SW end of Ormsaigbeg, which offers magnificent views across the Sound and as far west as Tiree.

MEM Donaldson had a much better suggestion. She wrote that the ‘caisteal’ might have been the “abode of some ‘minstrel’ of solitary habit” who, in celebration of his skills, called his place a ‘castle’. Whatever it is, it’s worth a visit, not least so you can form your own opinion.