The castle was probably built by the MacDougals of Lorne some time between 1265 and 1295, possibly on the site of a Norse stronghold – the name may be the anglicised version of Mioghairidh, perhaps derived from two Norse words, mikil, meaning great, and gardhr, a garth or house, so ‘great house’. Built in a hexagon to fit on a narrow headland of igneous rock, it was designed to dominate the northern entrance to the Sound of Mull at a time when Ardnamurchan was the northern limit of the MacDougal lands. 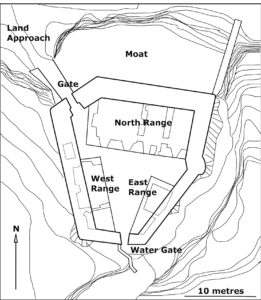 The castle’s curtain walls, up to 14m high, form a hexagon. The longest and thickest wall is to the north, facing onto the neck of land which is cut by a defensive ditch. There is a sea gate in the south wall, and a rock-cut stairway leads from the beach at the west to the land gate in the northwest wall. The walls enclose a courtyard roughly 20m north-south and 18m east-west, within which rise three buildings, or ‘ranges’. In its original form, the main building in the courtyard, against the north curtain wall, would have been a two-storey mediaeval hall.

The first record of Mingary is in 1495, when James IV stayed at “the castle of Meware in Ardnamurchan”. By that time Mingary had been in the hands of the MacIains since the early 1300s. The castle receives its second mention during the period when the MacIains’ star was rising within the MacDonalds’ Lordship of the Isles, when John MacIain received a charter from James IV granting him the lands of Ardnamurchan and the “castle and fortalice of Mingary”.

The castle is next recorded in 1550, when the regency of Queen Mary yielded the castle to Archibald Campbell, earl of Argyll. The MacIains retained Mingary under the Argyll lordship, but were attacked in 1588 by the Macleans of Duart. The Macleans enlisted the help of one of the Armada’s Spanish galleons, the Santa Maria della Grazia y San Giovanni Battista, which had taken shelter in Tobermory Bay, to besiege Mingary, but failed to take the castle. Later, the MacIains were ejected from the castle, and Argyll’s right to the keepership was confirmed by James VI in 1619.

In 1644, Alasdair MacColla MacDonald brought an army of around 2,000 Irish Macdonnells across from Ulster to support the Royalist forces commanded by the Marquis of Montrose. MacColla landed near, and laid siege to Mingary, which fell quickly in the face of his determined assault. Not long after, the royalist garrison was attacked by five Campbell-owned warships, one of which may be the seventeenth-century wreck discovered just off the castle. On MacColla’s departure, he left a garrison in Mingary and the castle remained in Royalist hands until 1647 when it was retaken by the Covenanting general, David Leslie.

The three buildings in the courtyard, seen here in 2016 after refurbishment, were constructed during the 17th and 18th centuries. The east range (right) housed two small rooms each entered directly from the courtyard. It was probably single-storey. The west range (left) consisted of a larger room which was at times the castle kitchen and a stable, with a storage cellar on its south side, and a room above. The north range, the most substantial, replaced an original mediaeval hall. It has four storeys, the upper ones accessed by an internal staircase with a single room on each side.

At the end of the 17th century, the Campbells returned to Mingary and, although they sold it in 1723, they were back again when Bonnie Prince Charlie landed at nearby Glenfinnan. During the uprising, Mingary was employed as a Hanoverian garrison base to harry local Jacobite forces. Some twenty years later the estate and the castle were sold to the Riddell family, who lived at Mingary until it was gutted and abandoned in 1838.

With its structure in imminent danger of collapse, in 2013 the Mingary Castle Preservation and Restoration Trust, a charity, commenced an ambitious £2.5 million rescue which has secured its future by make the castle financially self-supporting as a high-end letting house.

Following John’s elder brother, Angus Og MacDonald’s support of Robert the Bruce and the Bruce’s victory at the Battle of Bannockburn in 1314, the MacDonalds received extensive lands on the west coast and the isles. Despite John’s support of the English, he received Ardnamurchan and founded the Clan MacIain. For over 300 years Mingary Castle was the seat of the chiefs of Clan MacIain, who became powerful within the MacDonald’s Lordship of the Isles.

The history of the MacIains of Ardnamurchan is a complex of feuds, particularly with the Macleans of Castle Duart on Mull, battles, massacres, intrigues, treachery and misfortune. The MacIains’ star rose with the power of the Lordship of the Isles, and waned as the Scottish king and his supporters, particularly the Campbells, gradually asserted their control over the west coast. 1519 may be seen as the year when MacIain fortunes began their terminal decline, with the deaths of chieftain John and two of his sons at the battle of Creag an Airgid.

By the first decade of the 17th century the MacIains had lost Mingary and their lands, and were reduced to piracy. Most of the remaining clan members were massacred in MacIains’ Cave on Ardnamurchan’s north coast, the rest either fleeing or joining other clans and changing their names.

The story of the MacIains is told fully on the Clan MacIain website – here.