Thanks to Alasdair McDiarmid we have a page from a local 19th century Baptisms Register, recording baptisms from late 1832 through to the beginning of 1835, all years in which Sir James Milles Riddell owned Ardnamurchan Estate – the above shows the first three records. The document is immediately interesting because it only records baptisms in the area between Camas Inas westwards to Bourblaige. Alasdair has three suggestions. Firstly, this may indicate that there was a small church or chapel in Glenmore or Glenbeg, though there doesn’t appear to be any record of one. Secondly that, in an age when the baptism was usually done as quickly as possible because of high infant mortality, someone other then the minister, perhaps a travelling ‘missionary’, was performing local ceremonies. Or, thirdly, that it might be that the minister, Kenneth MacKenzie, kept separate records for different parts of his wide parish. 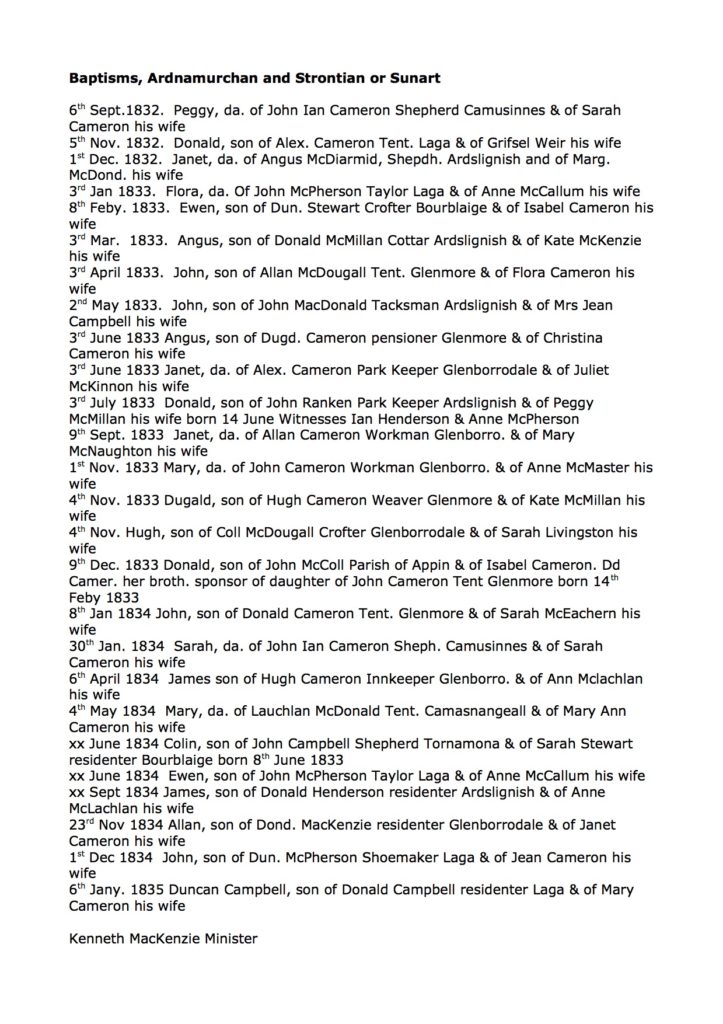 A transcription of the page is shown above, and a .pdf of this can be downloaded here – Baptisms 1833 1835.

For each baptism, the name of the child is given, then that of the father along with, in most but not all entries, his occupation, and finally his wife’s maiden name. This gives us a very good idea of the occupations of working men at that time: thus there are five Tenants, four Shepherds, three people who are described as ‘Residenter’ (resident), two Taylors, two Crofters, two Park Keepers, two Workmen and one each of Cottar, Tacksman, Pensioner, Weaver, Innkeeper, and Shoemaker.

Tenants would have had a joint share in a settlement, whereas a Crofter would rent his land directly from the landlord in a reorganised crofting township. It is therefore surprising to note that one of the Crofters, Duncan Stewart, whose son Ewen was baptised on 8th February 1833, had land in Bourblaige, a settlement cleared for a sheep farm in 1828. The two park keepers are located in Glenborrodale and Ardslignish, and one wonders where the ‘parks’ were that they worked; it may be significant that a Tacksman is recorded as residing in Ardslignish.

Many thanks indeed to Alasdair McDiarmid for letting us use this record.