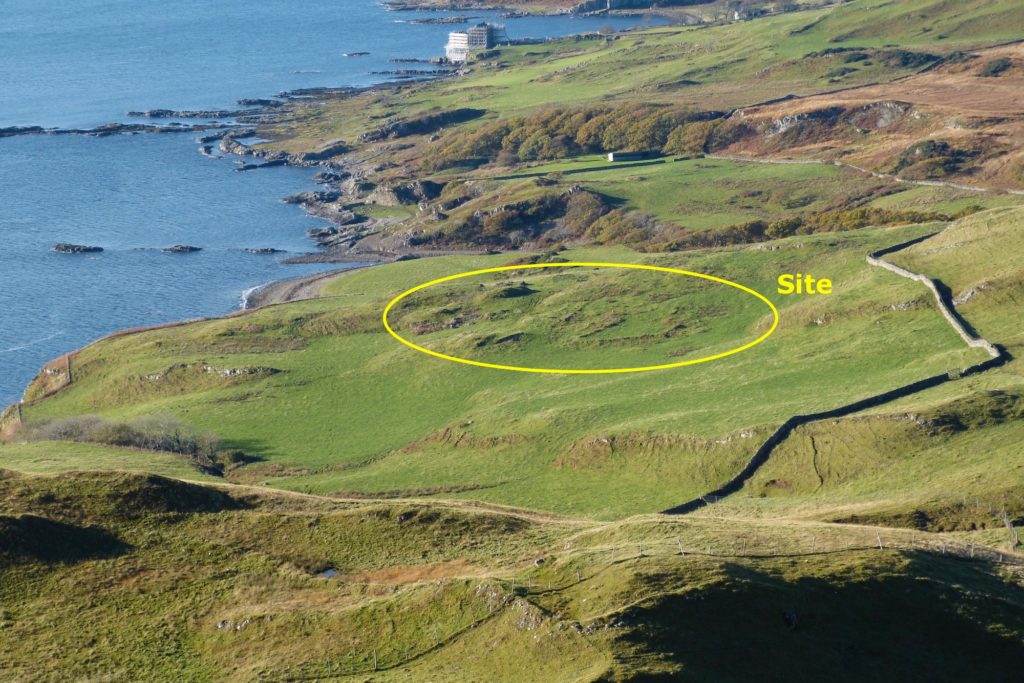 The remains of Choiremhuilinn, one of the settlements that was cleared in 1828, stand on a low hill close to the beach about a mile to the east of Mingary Castle – seen in the distance during restoration work. From the site there is a fine view across the Sound of Mull to Mull itself, but it a surprising site in that it is very exposed to the westerlies.

Its name, which means the corrie mill, is also surprising, there being no evidence on or near the site of a mill, nor is it in what would normally be termed a corrie.

The history of Choiremhuilinn starts with a story about one of its inhabitants some time around 1266, in the period when Norse power was waning. The then chief, an evil man called Mhuchdragain Mac Righ Lochluinn, was paying a visit to Choiremhuilinn with the intention of seeing the beautiful wife of one of his vassals, Eoghan Cleireach (Euan the clerk).

Eoghan, suspecting the intentions of his overlord, put his family into a boat on the beach by the mouth of the Choiremhuilinn burn and, armed with his tuaghairm, a short battleaxe, met Mhuchdragain on the main track into Kilchoan, which runs along the north side of Beinn na h-Urchrach. Eoghan hurled his axe so it sank into the skull of the Norseman and then fled up a gully, pursued by Mhuchdragain’s men. As they neared the top, one of the pursuers grabbed Eoghan’s dress but this was only loosely worn so he shrugged it off, causing his attacker to fall back down the slope into his comrades. Eoghan then ran over the hill and down to the shore from where he and his family sailed to Isla, where they sought the help of the ruler, Angus Mor MacDonald. 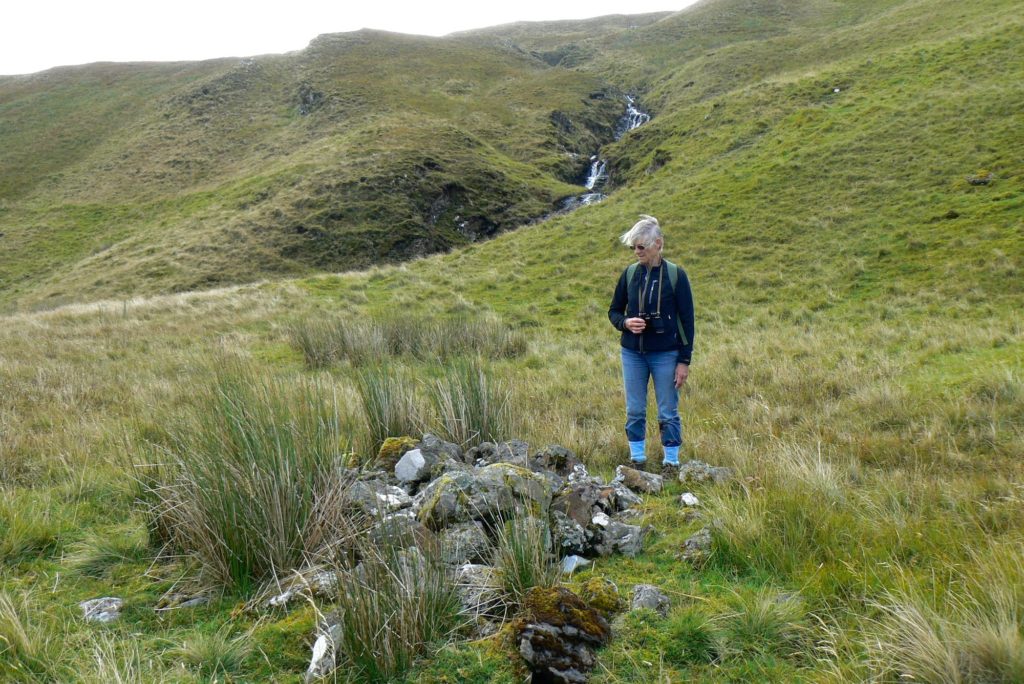 The cairn which was raised over the Norse chief, Carn Mhuchdragain, is seen in this photograph, while the gully up which Eoghan ran is called Glac na Toiridh, the hollow of the race or pursuit, is seen in the background. Beinn na h-Urchrach, the hill which runs to the north of, and parallel with Ben Hiant, means the hill of the cast or throw, and the point by the mouth of the burn from whence Eoghan and his family set out for Isla is Sgur Chul Eoghainn, though it is marked on today’s OS map as Sgeir nan Eun. 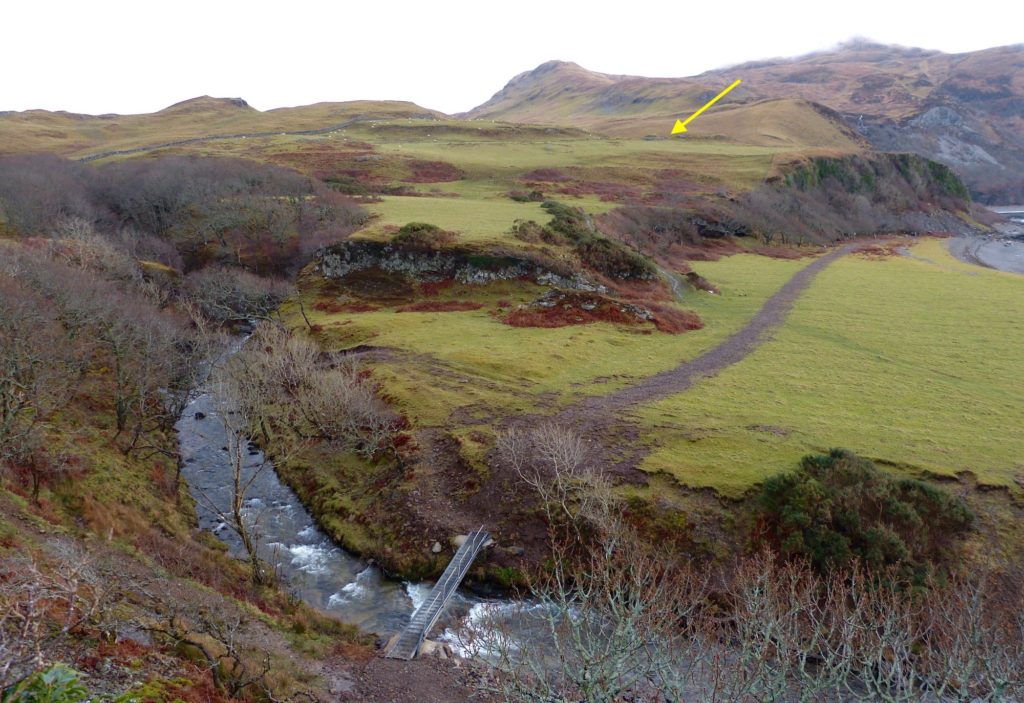 This picture shows the mouth of the Choiremhuilinn Burn, with the site of Choiremhuilinn arrowed. The ridge in the centre distance is Beinn na h-Urchrach, and Ben Hiant is lost in the cloud at top right.

Choiremhuilinn is next mentioned in the historical record in 1541, when the tenant was Donald McAlister McKane ( McKane being an alternate spelling of MacIain) and in 1610, when it was called Corriwillane and valued at 2 1/2 mark land. Janet Cameron and her children William, Alexander and John were the tenants in 1690.

In the record of the men who handed in their arms after the 1715 rebellion, those from Choiremhuilinn were John bane McCallan Mhuilinn, his son Ewn McCallan, Duncan McCarmaig, Ewn bane McKendrig, Angus McIntailor, and Tavish McKendrig.

In 1723, when Alexander Murray, Lord Stanhope, owned the Estate, the settlement was valued at 5 penny land and had a population of twenty-nine, nine men, eleven women and nine children, in seven families. During the period from 1739 – 1745, the tenant was Alasdair Mac Maighstir Alasdair. 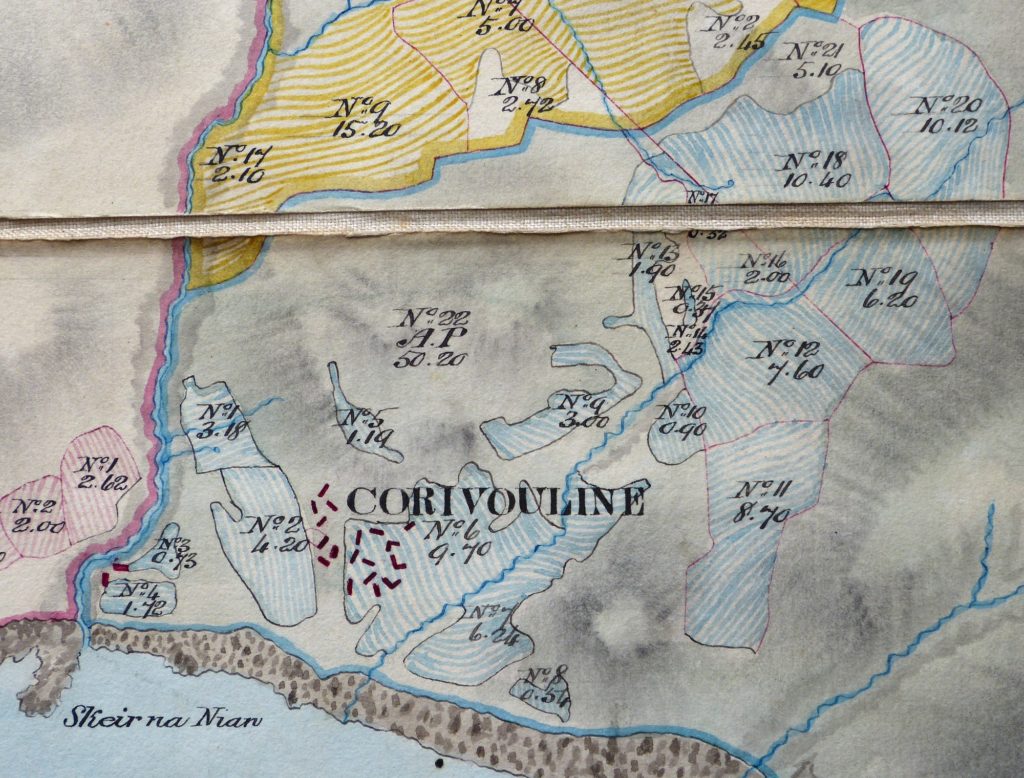 Choiremhuilinn is shown on the military map drawn by William Roy some time around 1750, and named Corryvulen. It is shown in more detail, as a typical nucleated settlement, on Bald’s map of 1806 (above, [1], with eighteen buildings on the main site and two close to the mouth of the Choiremhuilinn burn. Low’s survey in the following year names Archibald McMillan as the tenant, and says, “This is a very good sheep farm but also oppressed with a number of tenants. To arrange properly, these four last farms should be in one, and stocked with Cheviot sheep, but probably the price of rent would not be so much at the outset as to justify the removal of so many small tenants.” That he described ‘four last farms’ suggest that there has already been a reduction in the number of tenants.

The records of a Tobermory court case in 1825, a Hugh McLachlan junior, son of Hugh MacLachlan ‘tenant of Corryvullin’, is accused of stealing a horse from Archibald McEachnie of ‘Corryvullin’, though Hugh junior’s mother is described as having moved to Ormsaigbeg [4]. It is possible that this was part of the process of cleaning Choiremhuilinn, which was probably completed in 1828. Certainly, by the time of Dickson’s report on the Estate in 1851, no-one is listed as living in Choiremhuilinn. 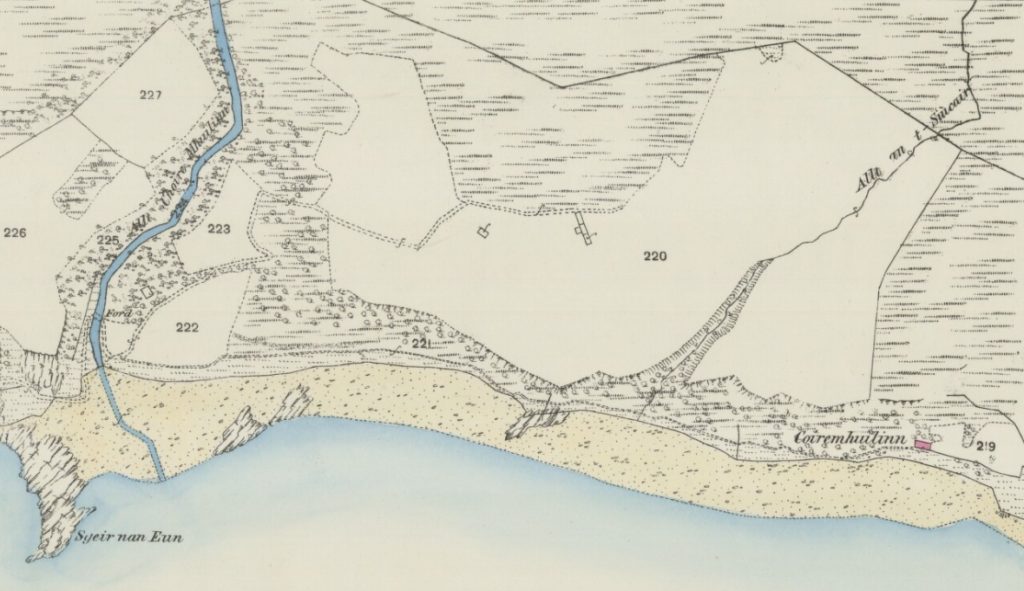 Despite this, the first OS map of the area, dated 1856, clearly shows a roofed building on the foreshore to the east of the Allt nan t-Sincair. The map labels this as Choiremhuilinn, and it is still roofed on the 1872 25” map (above, the building is marked in pink, [2]). The 1897 map shows it roofed, as it does the single building on the main site even though it was roofless in the earlier OS maps. Roofless, and buried in brambles, the shore house is visible today along the beach. 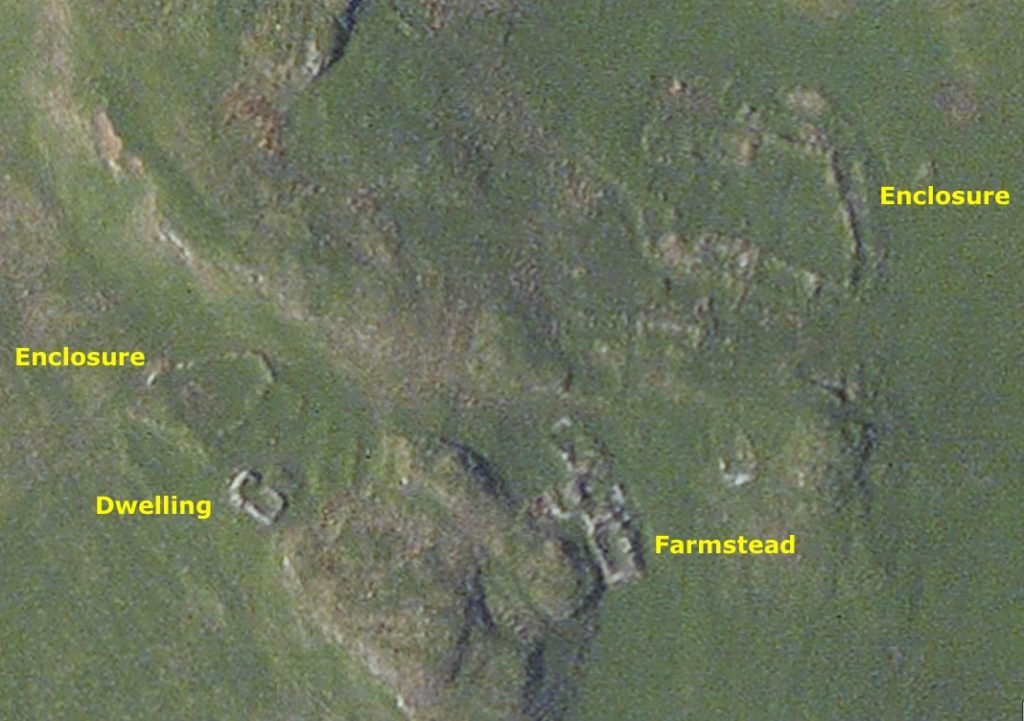 At the main settlement site, the other two structures shown on the 1872 map, the dwelling and the farmstead, are still clearly visible both on the ground and in the satellite view [3], as is one of the two structures by the mouth of the Allt Choiremhuilinn. 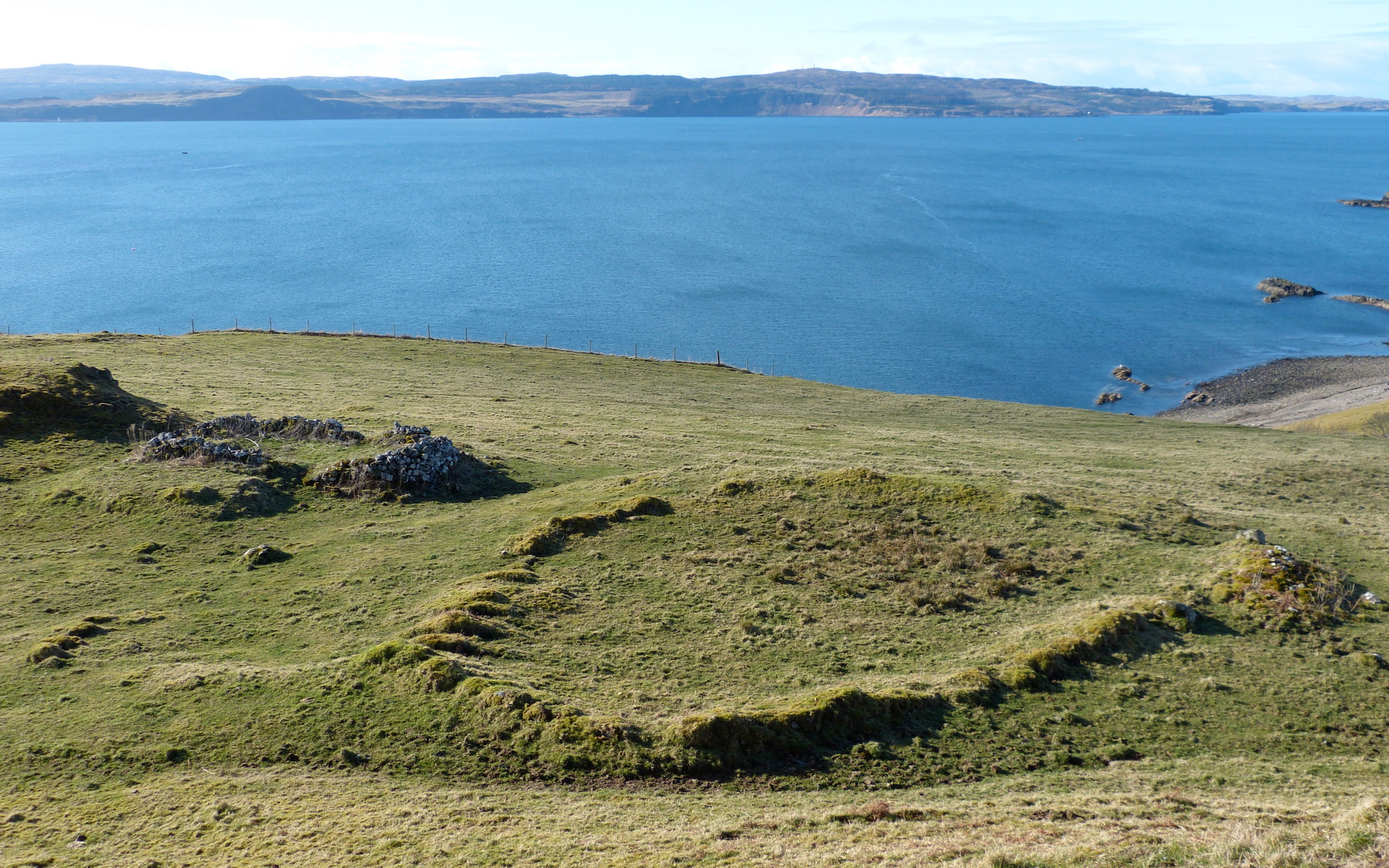 The single dwelling is seen to the left of this photograph, with the enclosure in the foreground. The Sound of Mull is beyond, with Mull along the horizon. Today, Choiremhuilinn stands on Ardnamurchan Estate land, its fields used for grazing cattle and sheep.