Although no direct evidence has been found of them on Ardnamurchan, by the time of Christ the peninsula was almost certainly peopled by a branch of Celtic Britons which the Romans called Picts. The Picts either spoke a version of Gaelic which was not understood by the later Scots, or a non-indo-European language related to Basque – so, for example, St. Columba required a translator when he converted Brude, the Pictish king. The Pictish script found on stone monuments appears to use similar letter forms to the Irish Ogham, but remains as yet untranslated. 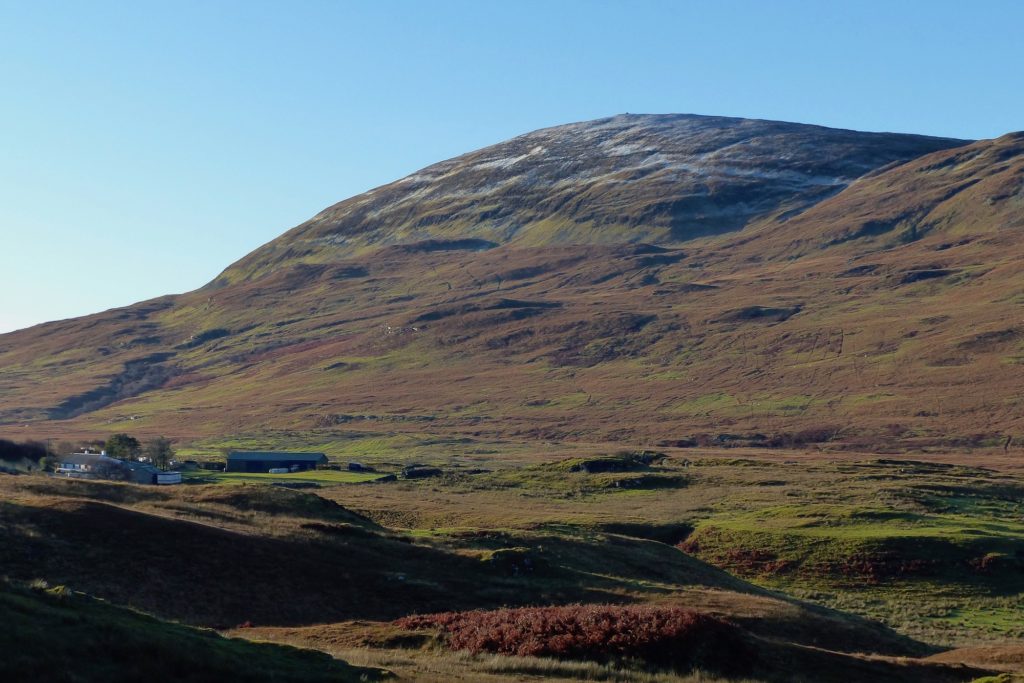 While the movement had started at least two centuries earlier, by the sixth century there was a major influx of Dalriada Gaels from Ireland who settled in Earra-Gaidheal, Argyll, so around this time they occupied Ardnamurchan – Adamnan writes that ‘the Irish immigrants had the freedom of Ardnamurchan’. Their language was the Celtic from which came the modern dialects of Scots and Irish Gaelic. Dalriadic influence is recalled in Cathair Mhic Dhiarmid (above), the ridge that runs to the west of Branault: Diarmid died in about 550 AD.

The spread of Gaelic influence and culture began the process of merging the Picts and Gaels. By the middle of the 6th century St. Columba was acting not only as missionary to the Picts but as a diplomat, helping to unite them with the Scots under King Aida, a process which was completed under Kenneth MacAlpin who became king of the Dalriada Scots in 843 AD. So Pictish power gave way to Scots, and the kingdom of the Gaels stretched from the Western Isles to the eastern coast.

The memory of the visits of the Irish saints to Ardnamurchan is preserved in place names. Around 500AD St. Finnan founded a monastery in Loch Shiel on an island named after him. This is visible from the ridge, called Suidhe Fhionan (St Finnan’s Seat), which separates Ockle from Gortenfearn.

Saint Columba was born in Ireland in 521, and began the first of his journeys in 563, finally settling on Iona as a base for his work. Both he and his followers visited Ardnamurchan. The spring at the side of the road at Ardslignish is known as St Columba’s Well (Tobar Chalum Chille), an island at Port na Cairidh, near the lighthouse, is called Eilean Chaluim Chille (the Isle of Columba’s Church), and a cave on the coast between Kilmory and Swordle is known as St Columba’s Cave. Columba died on Iona in 597. 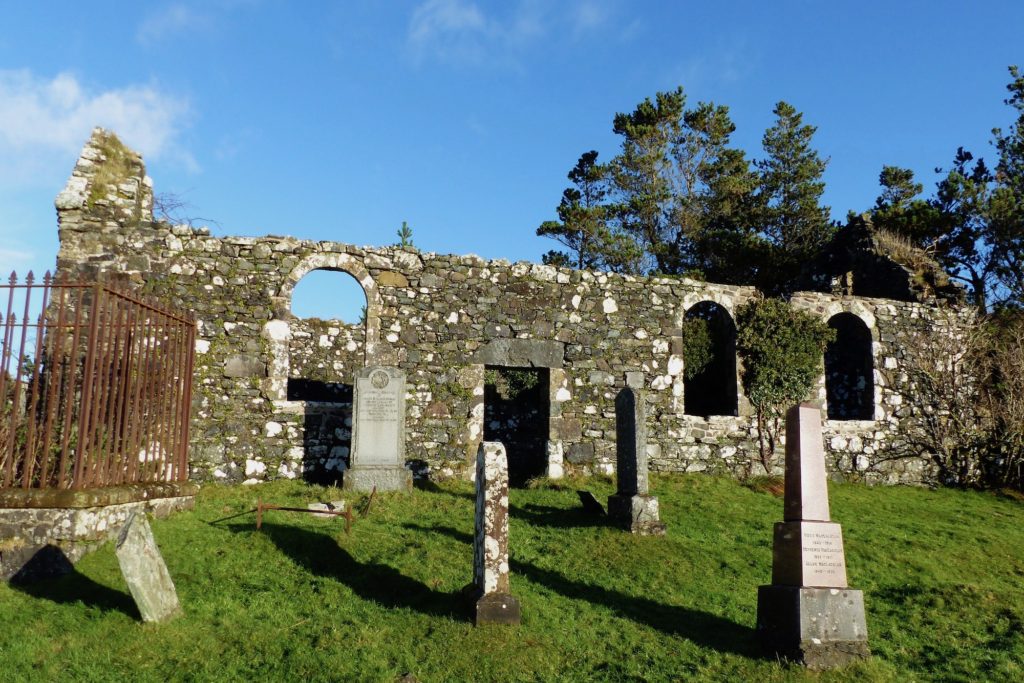 Around 700 AD, St. Comghan, the son of a Leinster prince, founded a church (Gaelic ‘Cill’) on a knoll at the back of a bay which faced out to the Sound of Mull. The ‘cill’ of Comghan (‘Koe-an’ in English) both gives Kilchoan its name and provides evidence that a community already existed here. While St Comghan’s original church is long lost, the old parish church on the hill at the back of Meall mo Chridhe, which dates back to the 12th century, stands on its site. The story of the church is described on the MacIain site, here. 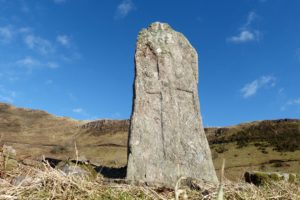 While the standing stone by the Campbell graveyard at Camas nan Geall is Bronze Age, the carvings on its south face are Christian, and probably date to the time of the saints. They include three Christian crosses, four ‘pellets’, and an animal with a upcurved tail, possibly a dog.

The Norse presence was probably at its height during the period from 800 to 1100AD but the Vikings, having come as raiders, stayed to become farmers and steadily integrated into the population.

The most obvious evidence for their occupation comes from the names they left behind. Out of twenty-three settlements at the western end of the peninsula, eight have names which are derived from the Norse, and, as one would expect of such consummate seafarers, many coastal features such as headlands and bays have Norse-derived names.

One example is the name Mingary, or Mingarry, which is the site of Mingary Castle. It may be the anglicised version of Mioghairidh, though the exact meaning of the word is cause for dispute. A possible translation is that it is derived from two Norse words, mikil, meaning great, and gardhr, a garth or house, so ‘great house’ – though the name has been translated by some to mean ‘great land between machair and moor’. That its name has a Norse derivation suggests that the site was occupied in the time of the Vikings, if not before, and evolved into a mediaeval castle site.

Another is the name given to the Neolithic chambered cairn at Ormsaigmore, Greadal Fhinn. Local lore has it that the ‘Fhinn’ refers to the Viking chieftain Keitell Flatnefr of Raumsal, known on the west coast as Caithil Fin, and that he was buried here. In 888AD he fled Norway and, according to the Sagas, settled on the west coast of Scotland, where he later died. 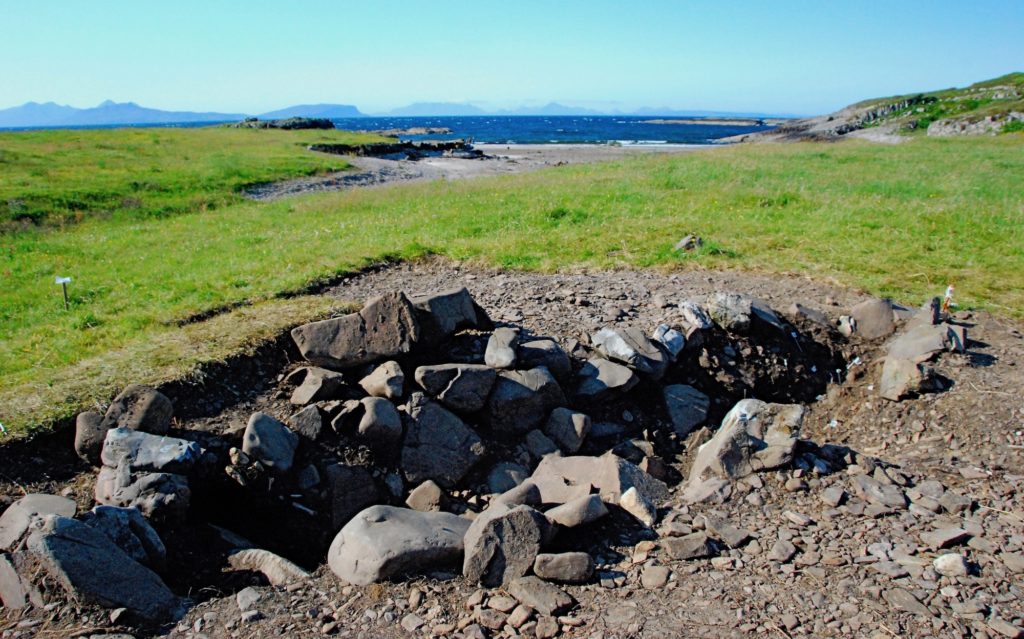 So they were here but, until 2011, finding evidence on the ground was much more difficult. In that year, however, archaeologists from the Ardnamurchan Transitions Project discovered and excavated a Viking boat burial on the flat land close to the beach at Swordle, the first complete Viking boat burial excavated on the British mainland. Dated at around 1,000AD, it contained the body of a high-status man who had been buried with his spear, sword, shield, axe, whetstone, drinking horn, flints for making fire, and bronze ring pin. Since the whetstone came from Norway and the ring pin from Ireland, if the man wasn’t himself well-travelled then he was part of a society which had wide trading links. Details of the excavation are on the Ardnamurchan Transitions Project website here, and a recently published account of the excavation and its findings is available for download from Antiquity magazine here.

By the latter half of the 11th century, everything as far south as the Isle of Man was part of a Norse Kingdom of the Isles under Godred Crobhan. In 1079 the Scottish Crown was compelled to recognise the Norsemen as sovereigns of all the islands of west Scotland except those in the Firth of Clyde, and it was not until c1120 that Somerled, a Scots/Norse chief of Morvern, defeated the Norwegian settlers south of Ardnamurchan, including the reputedly seven foot tall Borrodill, after whom Glenborrodale is named

We obtain a feel for the times at the end of Norse rule in the area through a tale which has been handed down through the generations. It is told in the section on the settlement of Choiremhuilinn – here.