The archaeological activity at Camas nan Geall has got off to a fabulous start with lots of keen volunteers turning up to help out with this fascinating and important work.

The general plan is to do a quick landscape characterisation project, in order to compare the bay with Swordle, where work by the Ardnamurchan Transitions Project team has been ongoing for 15 years. Swordle hosts a huge amount of archaeological sites with evidence of burials over the millenia in the chambered tomb and activity from the iron age, viking age and post-medieval period found in the bay.

The landscape at Camas nan Geall is very similar – there is the chambered tomb, an iron age fort just to the west of the bay, plus a few in the hills around. There are also post-medieval sites – Bourblaige and other settlements close by, so it is highly likely there is bronze age and norse activity to be found, it’s just a case of we don’t know where yet.

This phase of work runs to the 12th September and will involve continuing from the original excavations started in 2019, led by Ian Hill of Archaeology Scotland. One of the 19th century farmhouses in the bay was investigated. The latest phase of its improvement shows straight gabled ends – a result of either landowners trying to improve the standard of the occupant’s living, or perhaps the aesthetics of the building. There is no roof material left on any of the houses around the bay, but this one has evidence of beam slots, so suggests some sort of wooden frame but whether it was thatched or tiled, we don’t know. Some slates were discovered but not as many as you would expect, if the roof had been tiled.

This, and the house built over the chambered cairn are mapped from the 1870s. Both were bound by a large enclosed area – with large oak trees still in place to identify the boundary. There was also a track which led from one house to the other.

Four small trenches were dug in 2019 – excavations discovered a cobbled floor in the interior, a beautiful cobbled terrace outside the front (and only) door, where you can imagine the occupants weaving, or mending nets, looking out to sea.

The questions that remain are: When does the building date from? Was it built on top of an older structure? What were the rooms used for?

To find out the answers, excavation work will pick off where it was left two years ago, and the plan is to dig a little deeper to see what artefacts and deposits lie on the site, and possibly dig through part of the floor to see if there’s any evidence of an older structure. 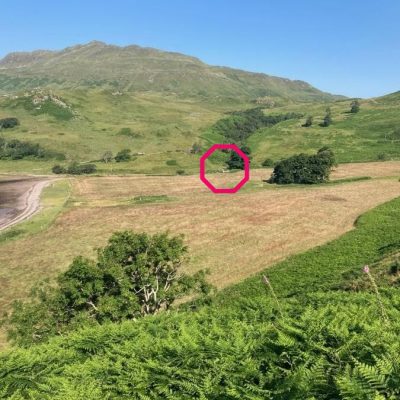 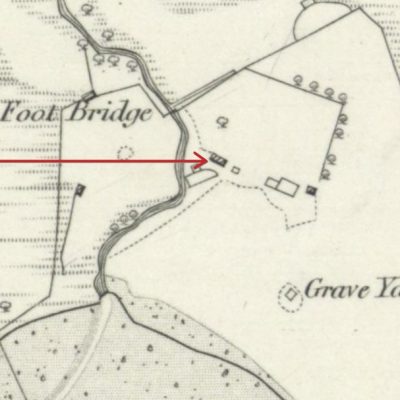 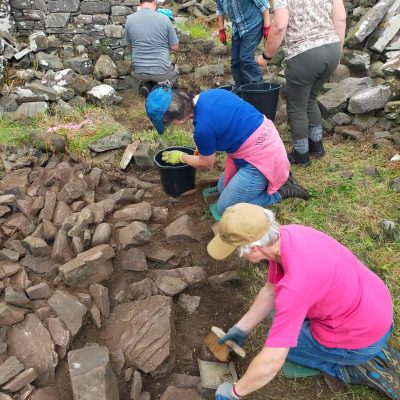 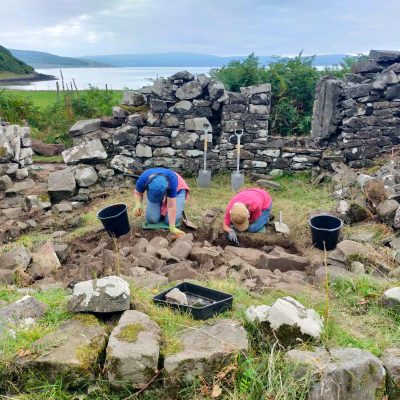 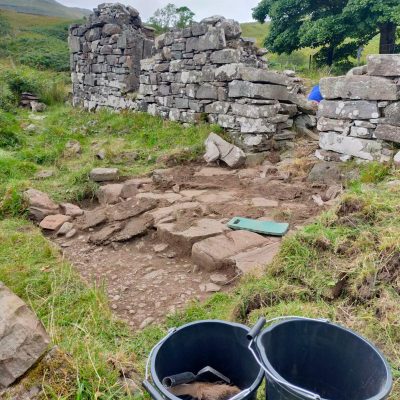 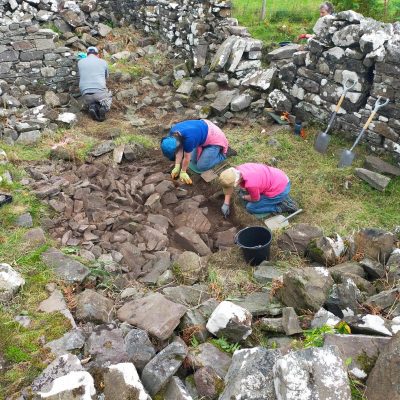