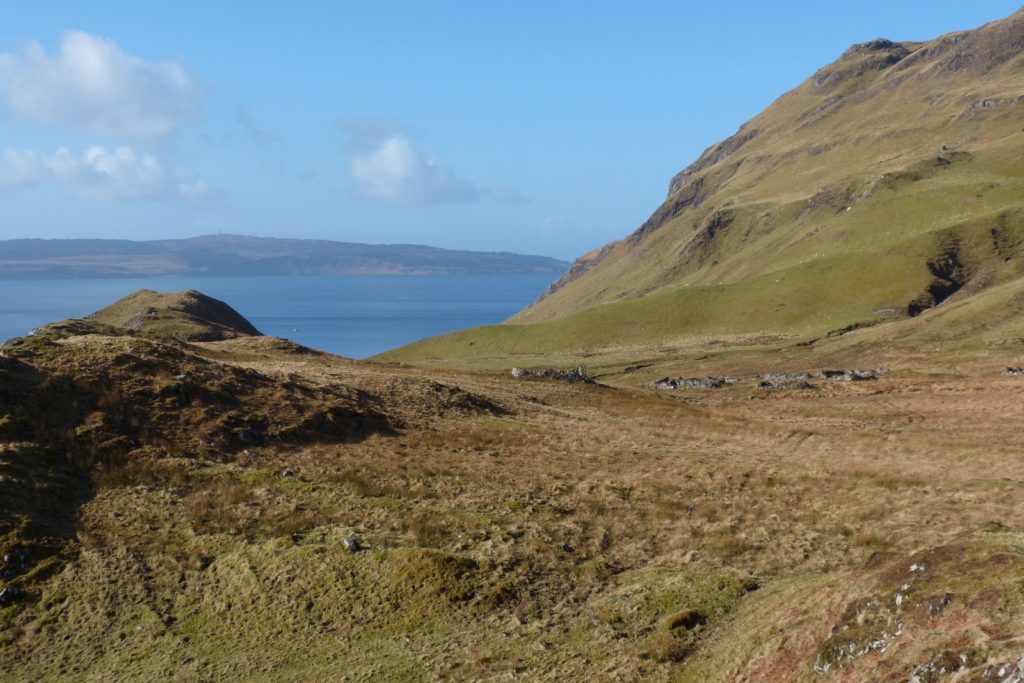 Of all Ardnamurchan’s settlements, Bourblaige has the most spectacular site. It lies in a wide bowl of land, with the lower slopes of Ben Hiant rising steeply to the northwest and the glen falling away to the southwest, giving views across the Sound of Mull to Morvern and Mull. A burn, tumbling from the flanks of Ben Hiant, passes through the village, and the land surrounding it is, for Ardnamurchan, reasonably fertile. 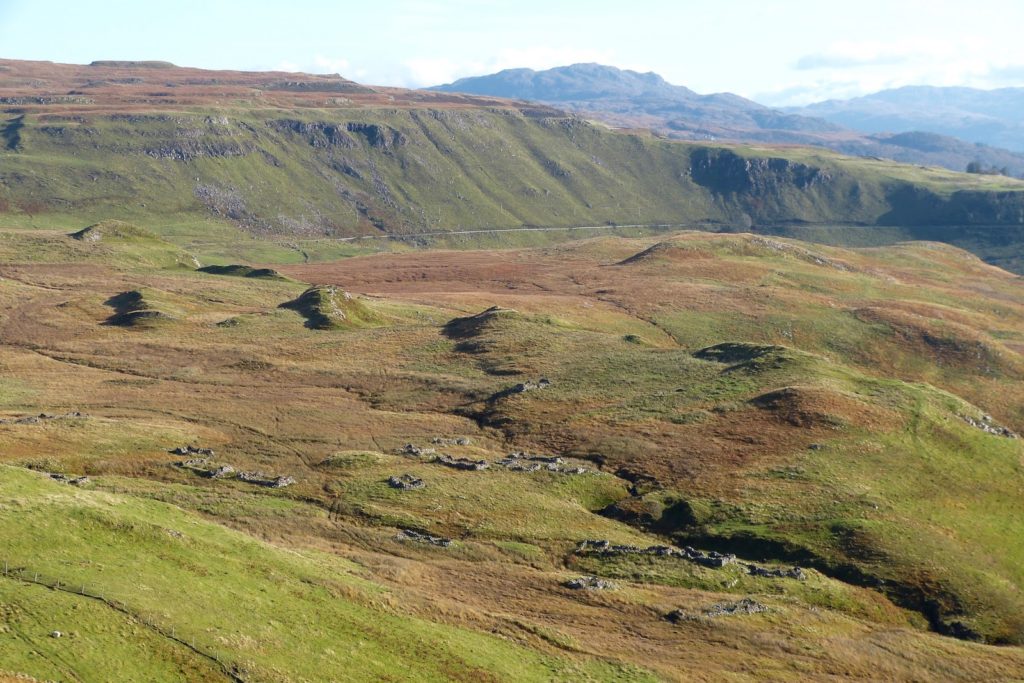 The remains of the houses blend in with the landscape. At one time all would have been thatched, and the smoke from peat fires would have been curling upwards into the still air.

The community was cleared in 1828 and, as far as one can tell, all its residents removed, so what remains reflects, like Pompeii, a way of life frozen in time. Thus the decision by Historic Environment Scotland (HES) to schedule the whole area of this settlement was a good one, the reasons given being that, “The monument is of national importance for its potential contribution to an understanding of the way of life and the architecture of post-Medieval communities in this area of Scotland. Many of the buildings are well preserved and contain complex architectural information.” 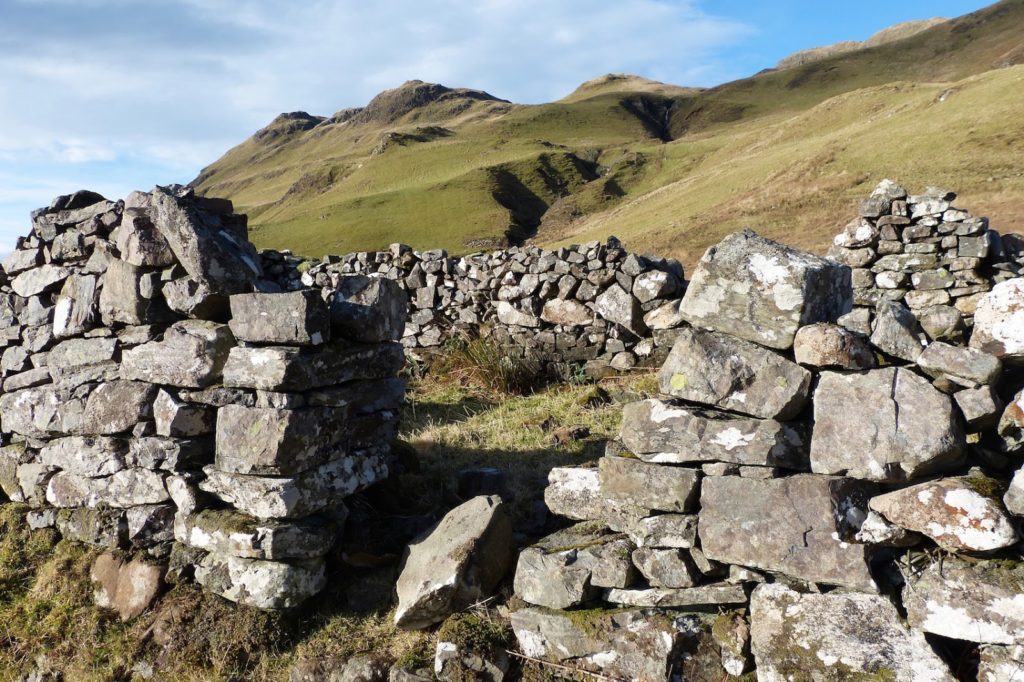 However, unlike Pompeii, the most visible remains at Bourblaige – its buildings and walls – are deteriorating, particularly through the actions of the very things for which it was cleared, domestic animals such as sheep and cattle. 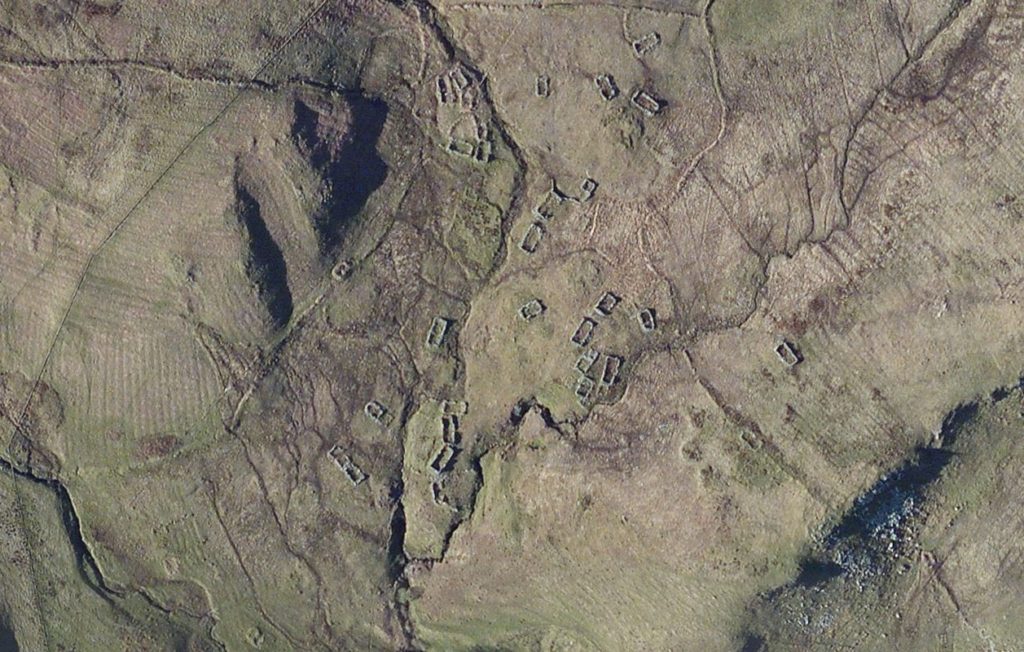 Bourblaige was one of West Ardnamurchan’s larger communities, with a population of 35 in 1737. In his 1807 report to the then Estate owner, Sir James Riddell, Alexander Low described it as, “a very pleasant sheep farm oppressed with too many tenants” This satellite image from Bing Maps gives an idea of its size, and of the extent of the agricultural workings which surround it, while…. 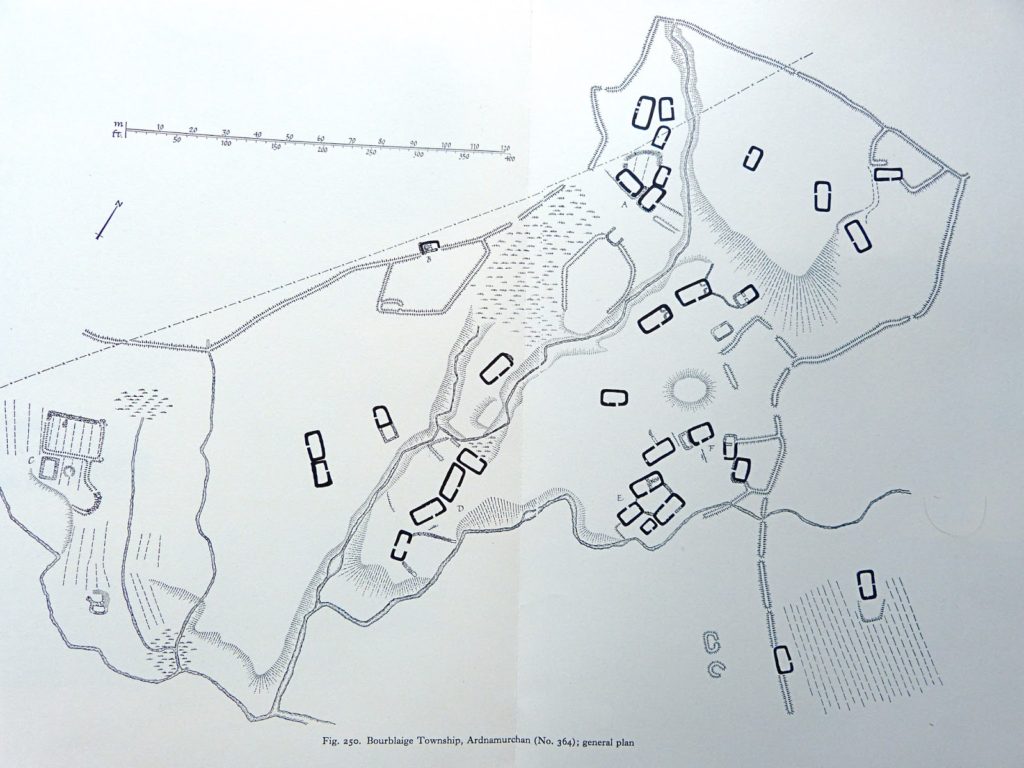 ….this map from research carried out for Highland Council gives detail of the field walls and buildings.

According to the HES count, there are about 36 buildings including what may be houses, barns and byres, often associated with small enclosures which may be kail-yards. 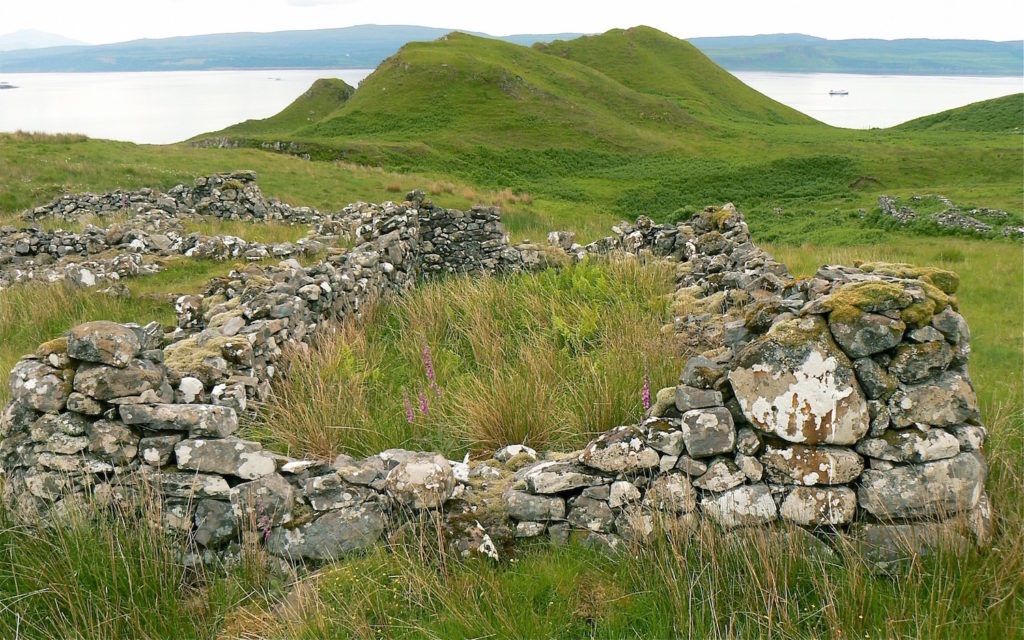 An account written in 1892 describes the Bourblaige clearances as a process “….attended with many acts of heartless cruelty on the part of the laird’s representatives. In one case a half-witted woman who flatly refused to flit, was locked up in her cottage, the door being barricaded on the outside by mason-work. She was visited every morning to see if she had arrived at a tractable frame of mind, but for days she held out. It was not until her slender store of food was exhausted that she ceased to argue with the inevitable and decided to capitulate.” Another observer recorded that, “To clear Bourblaige, the laird’s men shot the dogs, and they shot the goats, and they drove away the cows. And then they took the roofs off. It was in the wintertime that they did it. Ploughs were put through the potato pits so that they would spoil in the frost. And the people walked to Swordle [on the north coast] through showers of snow.”

Unlike Tornamona, where a sheep fank was built close to the site, no 19th century, post-clearance buildings were constructed in or near Bourblaige, which probably explains why the stone walls of the houses weren’t pillaged as they were at both Tornamona and Camas nan Geall. 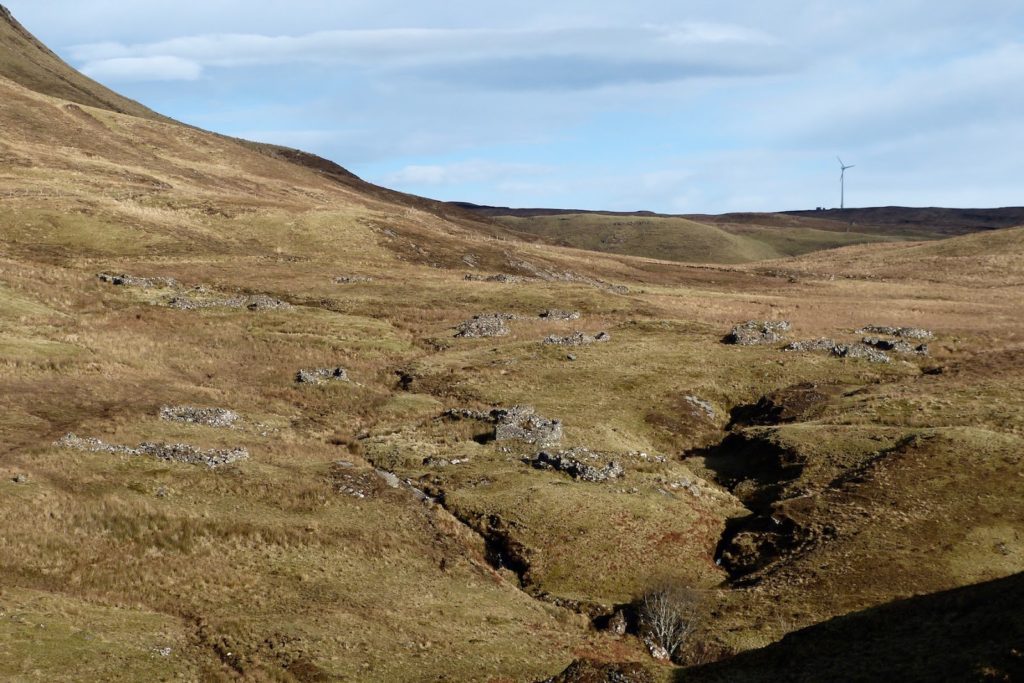 The buildings which are most evident are almost certainly of 18th to 19th century construction. Some of the more isolated dwellings were probably the homes of cottars, and other structures may include a kiln-barn, byres and other storage barns. The houses were substantially built, had rounded corners, and were probably cruck-framed and hip-roofed. 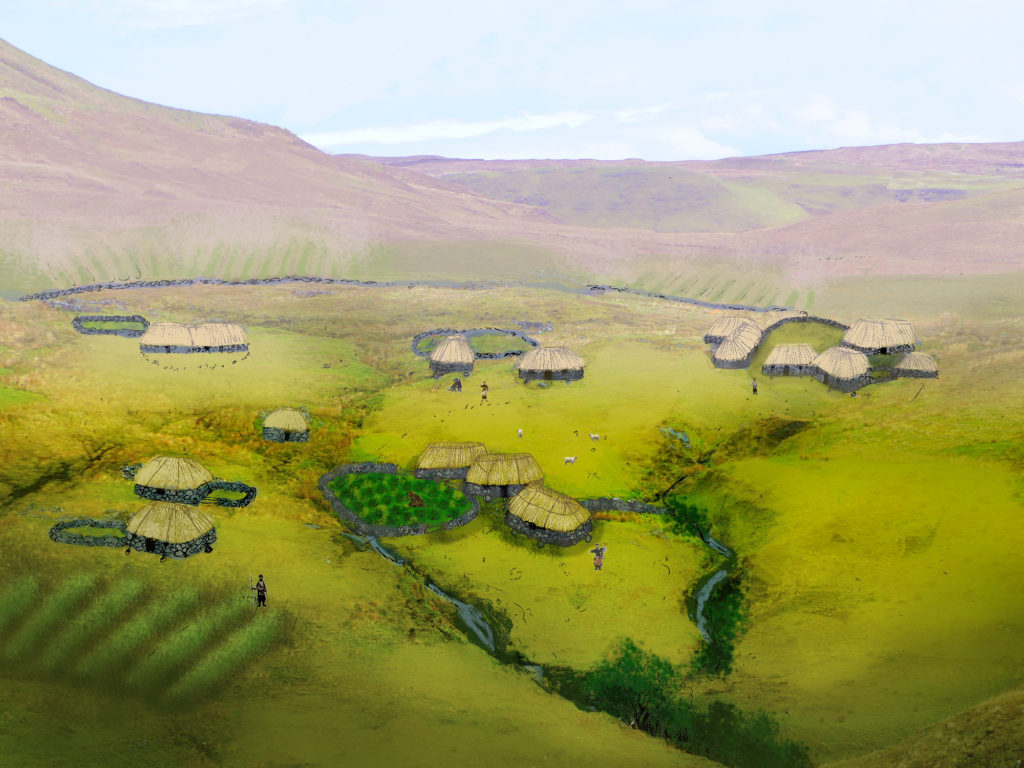 From the previous photograph it is possible to reconstruct what Bourblaige may have looked like in the years just before it was cleared – sketch by Rachael Kidd.

The author, MEM Donaldson, who lived for many years at Sanna, considered Bourblaige to be the site of Muribulg, where the ‘Annals of Tigernach’ record a battle between the Picts and Dalriads in 731AD. Certainly, the settlement itself is very old, and both site and surrounding area – much of it outside the scheduled area – have evidence of many older buildings. 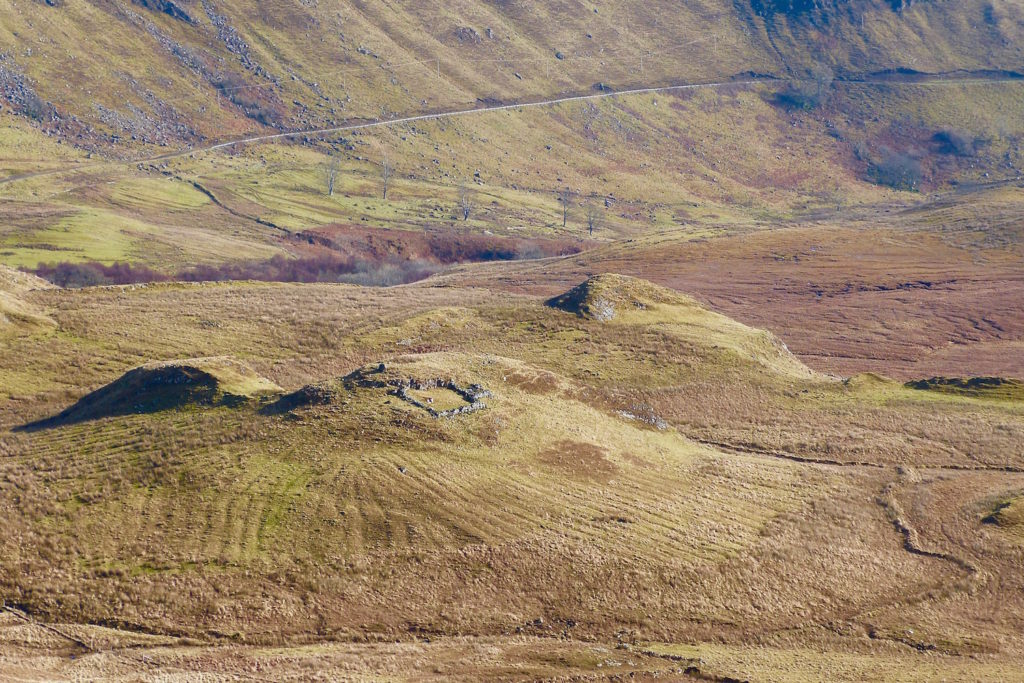 For example, to the northwest of the settlement’s site is this conical hill. Its flanks have evidence of the intensity of farming activities, and, near the summit, there are the remains of a pre-clearance sheep fank, but the area is also recorded as a hill fort, and a further fort lies nearby to the east.

Greg Towner, of Australia has undertaken comprehensive research of the history of the Bourblaige families at the time of the Clearances. Click here to take a look.