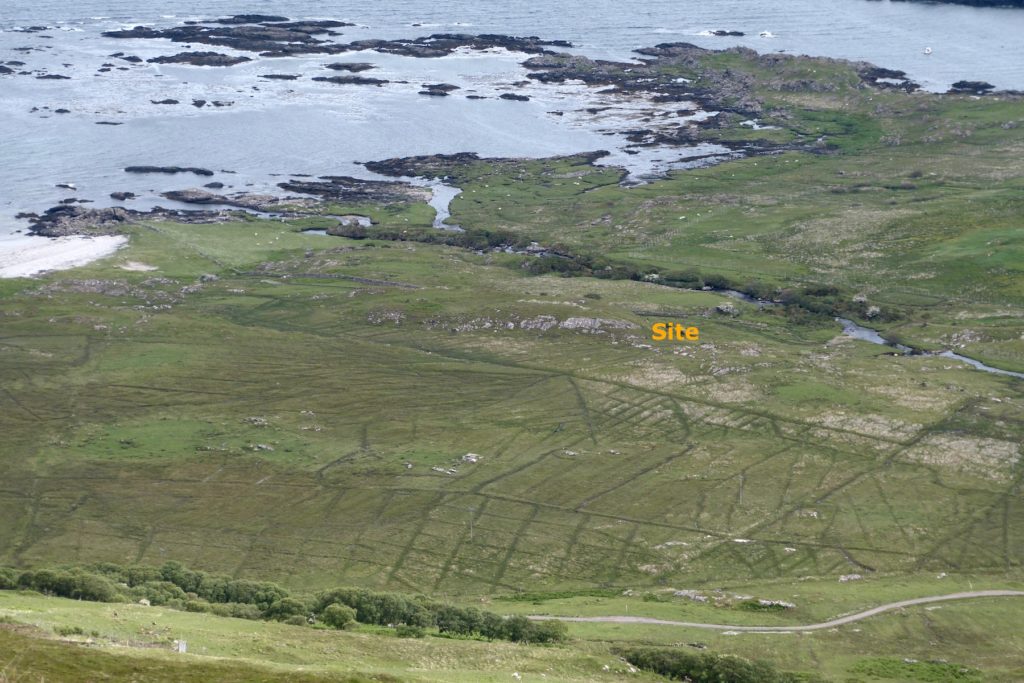 Achateny, Acha-teine in Gaelic, means field of fire.  Today, it comprises two fine, mid-19th century stone houses, both available as holiday homes through Ardnamurchan Estate, and an extensive steading, part of the Estate’s farm, but once the settlement housed upwards of 50 people living in a centuries-old settlement.

The site of the settlement was lost even from local knowledge, and was found recently through studying old maps, which clearly indicated where it had stood.  In early 2015 it became the subject of research by the Ardnamurchan Community Archaeology group. 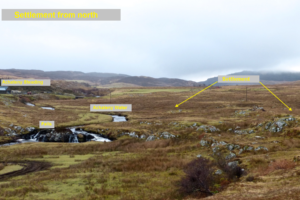 The settlement occupies a site along a low ridge of exposed rock running NNW-SSE parallel to, and west of, the Achateny Water – approximately in the middle of the top photograph.

In 1686, the tenant is recorded as Neill McColduy VcIlory, the land being valued as a 3 merk land. In 1723 Achateny was recorded as a six penny land. [1] 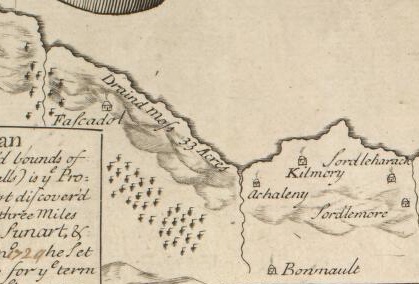 The first map to show the settlement is Bruce’s map of 1733 [4], which shows it on the east side of the Achateny Water.  The 33 acres of ‘drained moss’ was probably part of the works undertaken by Sir Alexander Murray of Stanhope. The drainage ditches are clearly visible today – see the top photograph.

The ‘Rental of Ardnamurchan’, 1737, drawn up on the orders of Sir Alexander, records Achateny as valued as 6 penny land. Duncan Stewart was the tenant, who also held Camas na Gaul and Culoan, Ardslignish, Glenmore and Glenbeg. [1] At that time the settlement had 10 families, with 17 men, 21 women and 17 children, total 55. 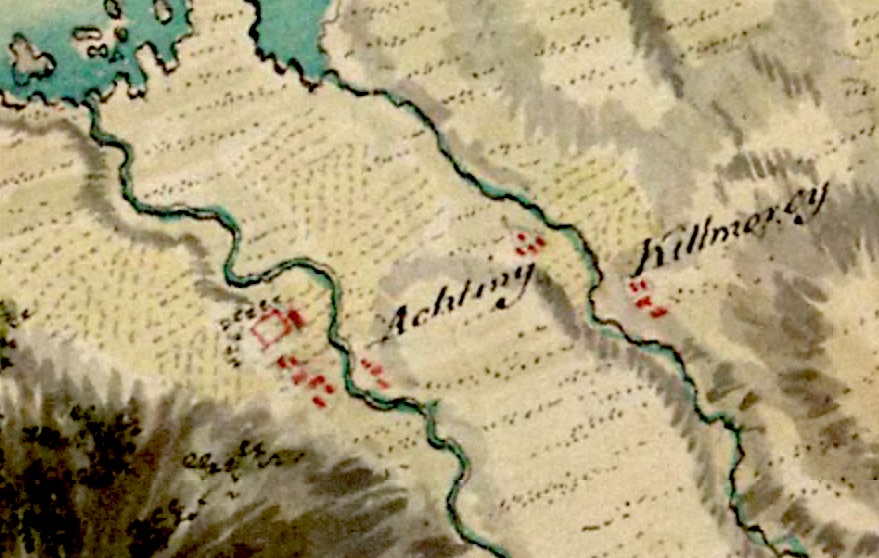 Roy’s Military Map of 1747-52 marks seven buildings and an enclosure on the west side of the burn, and three buildings on the east where the present steading stands. [4] 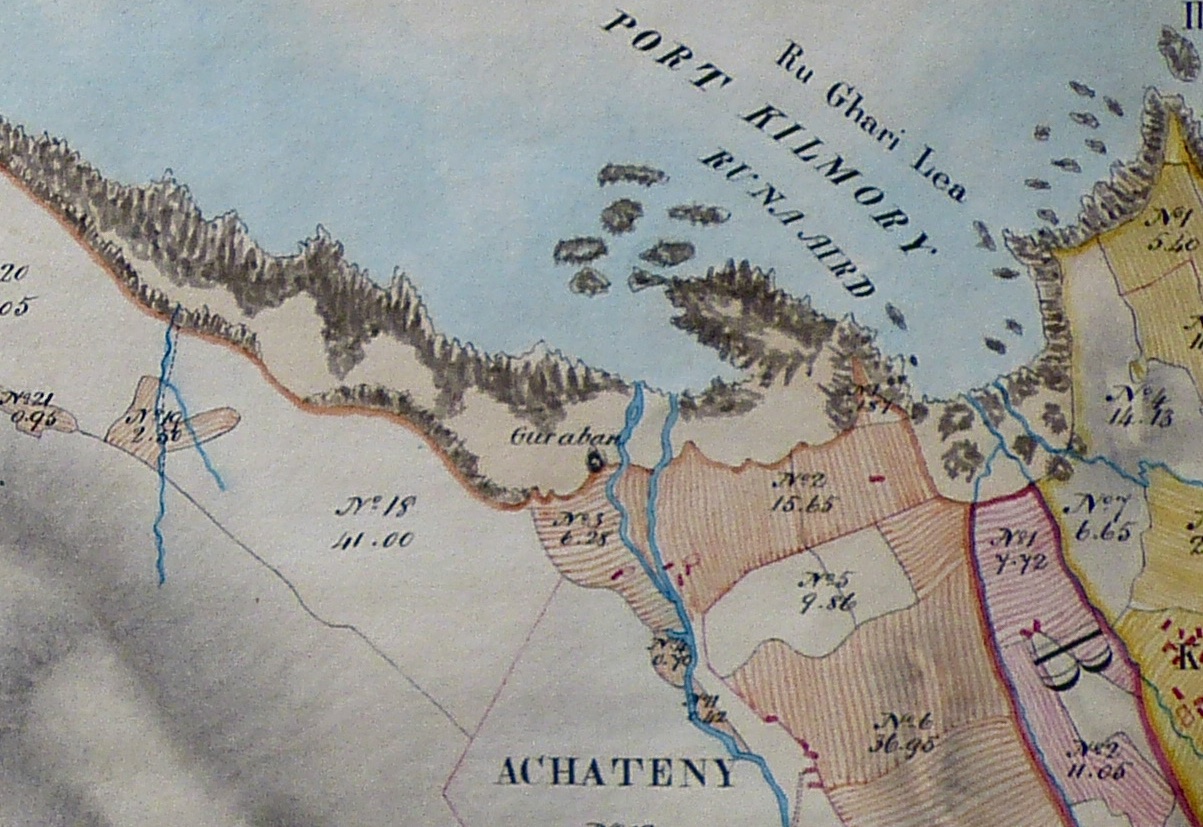 Bald’s map (1806) [3] shows only one building to the west, with what might be an enclosure, and three to the east, also with an enclosure. This indicates that the settlement had already lost a significant proportion of its population. Bald also marks a feature near the beach immediately to the north of the site as Guraban – the nearby bay is Port Ban. This suggests that the community may already have been in decline before the clearances.

Alexander Low’s ‘The Valuation of the Estate of Ardnamurchan’, 1807, contained recommendations to the then owner of Ardnamurchan Estate, James Riddell, on changes that could be made to bring the Estate into a profitable condition.  He records Auchateny as having 2790.180 acres which comprised 82.34 arable, 175.09 cultivated with the spade, 1149.72 ‘fine hill pasture’ and 1383.03 ‘moor and pasture’. Valued at £338, Donald McLean was the tenant.  In his summary, Low stated that, “The face of the hills is very good sheep walk, and the whole is a complete farm of the kind, and would keep cheviot sheep.” [2] 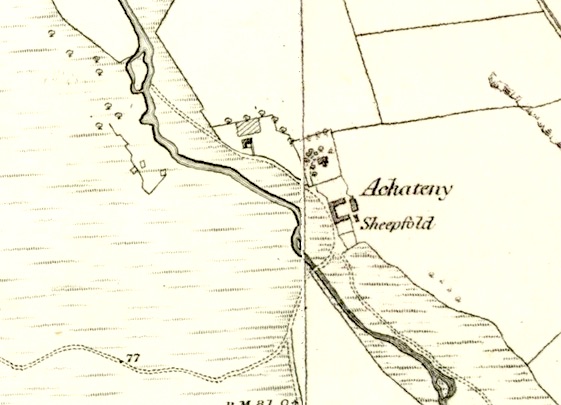 On the 1872 OS 6” map [4], which followed the creation of the Achateny sheep farm, new buildings are shown to the east of the burn, and three unroofed structures to the west. These are almost certainly the remains of the settlement’s houses and enclosures.

The buildings immediately to the east of the settlement is Achateny Cottage, the one to the east again is the farmer’s house, Achateny House, with a date of 1866 over its door, and those to the south are part of the farm steading. The date suggests that Achateny settlement may finally have been cleared at the same time as the Swordles, in 1853. 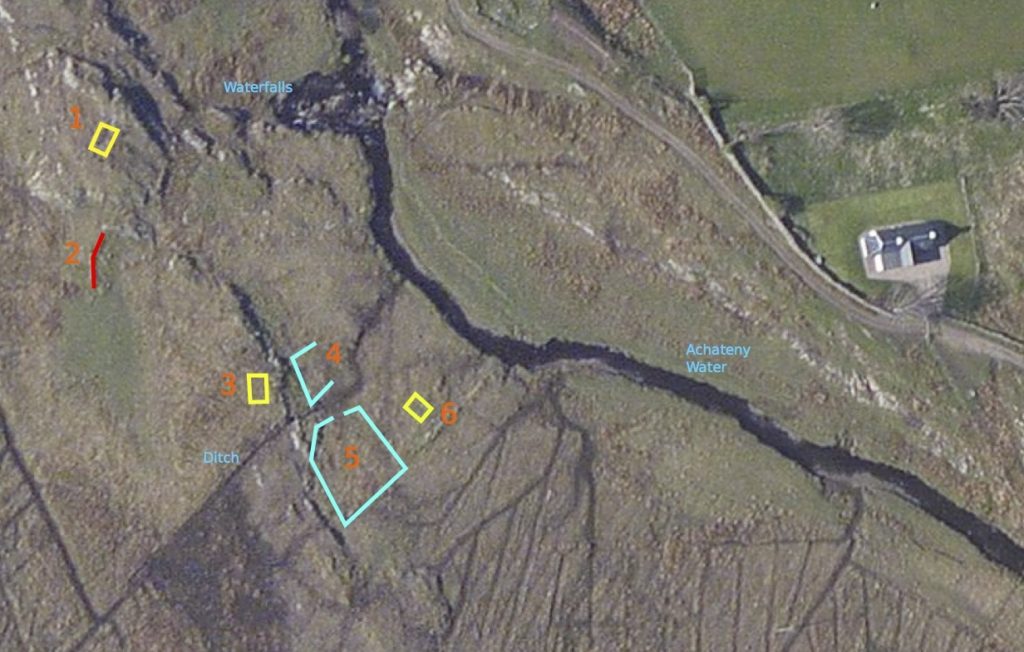 AAHA’s predecessor, the Ardnamurchan Community Archaeology group, carried out a survey in early February 2015. Seven structures were found, mapped and recorded. The house to the right is Achateny Cottage. 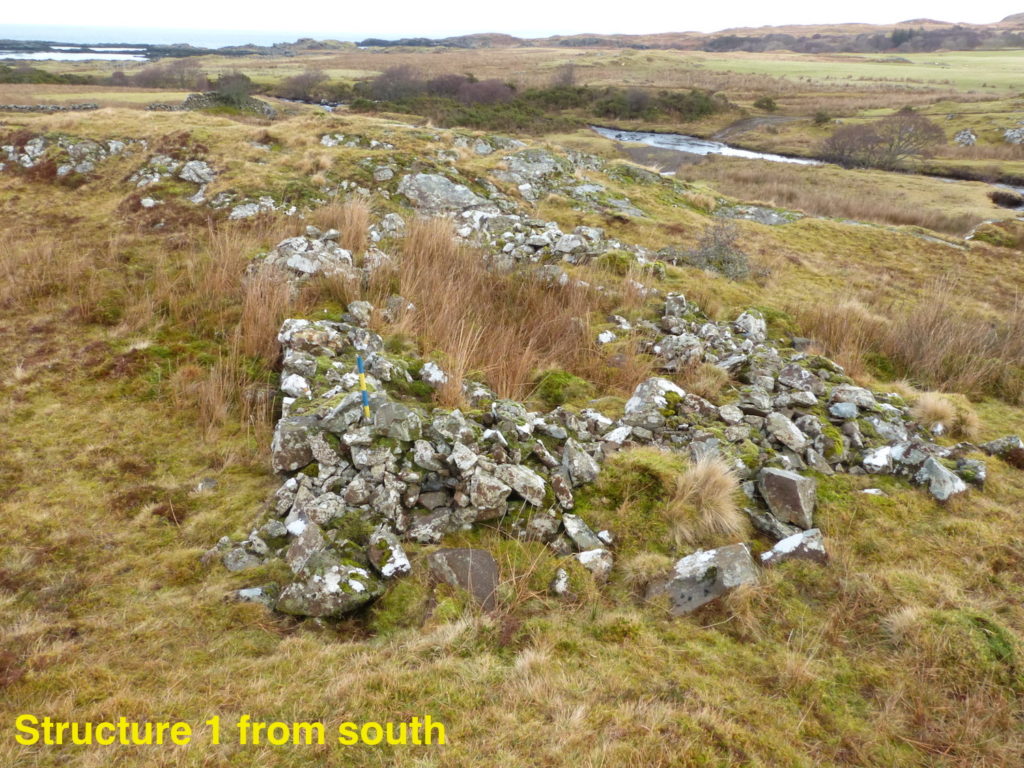 Three of them, numbers 1, 3 and 6, are almost certainly the remains of dwelling houses.  Typical dimensions are 6m by 4m, with walls 0.75m thick.  All are aligned along the rock ridge, their longer sides being roughly north-south and their doors opening to the east, towards the Achateny Water. 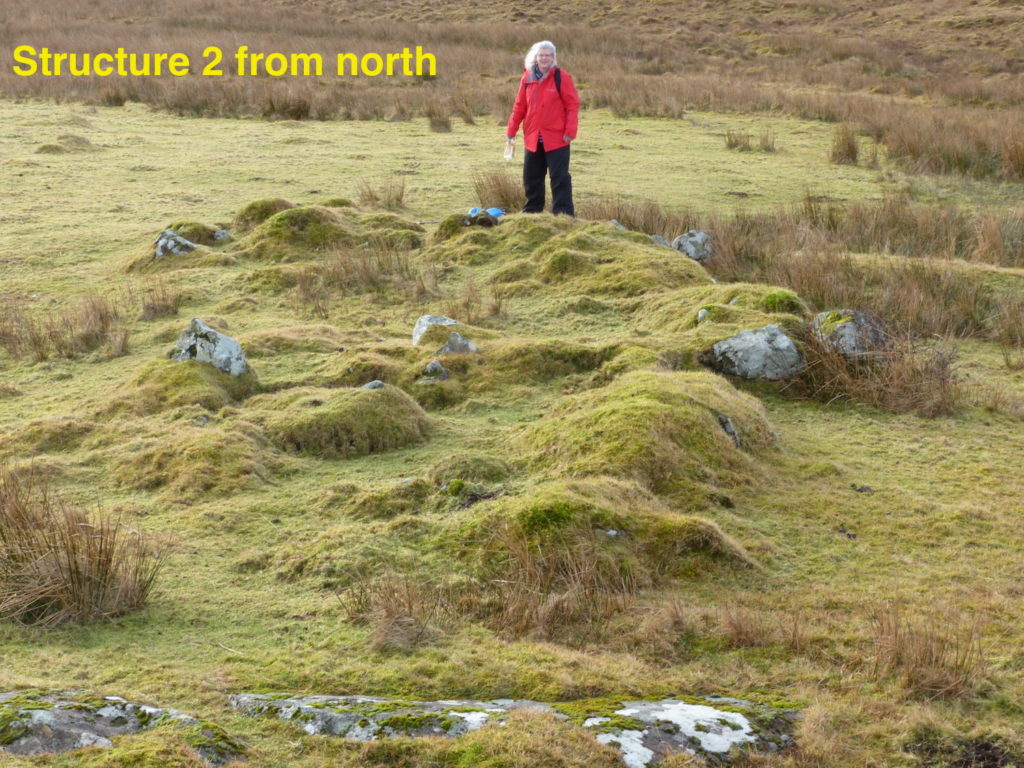 Structure 2 is similarly aligned, but was built in a bow shape with internals divisions but apparently open to the east.  It lies slightly to the west of the ridge.  Its purpose is unknown. 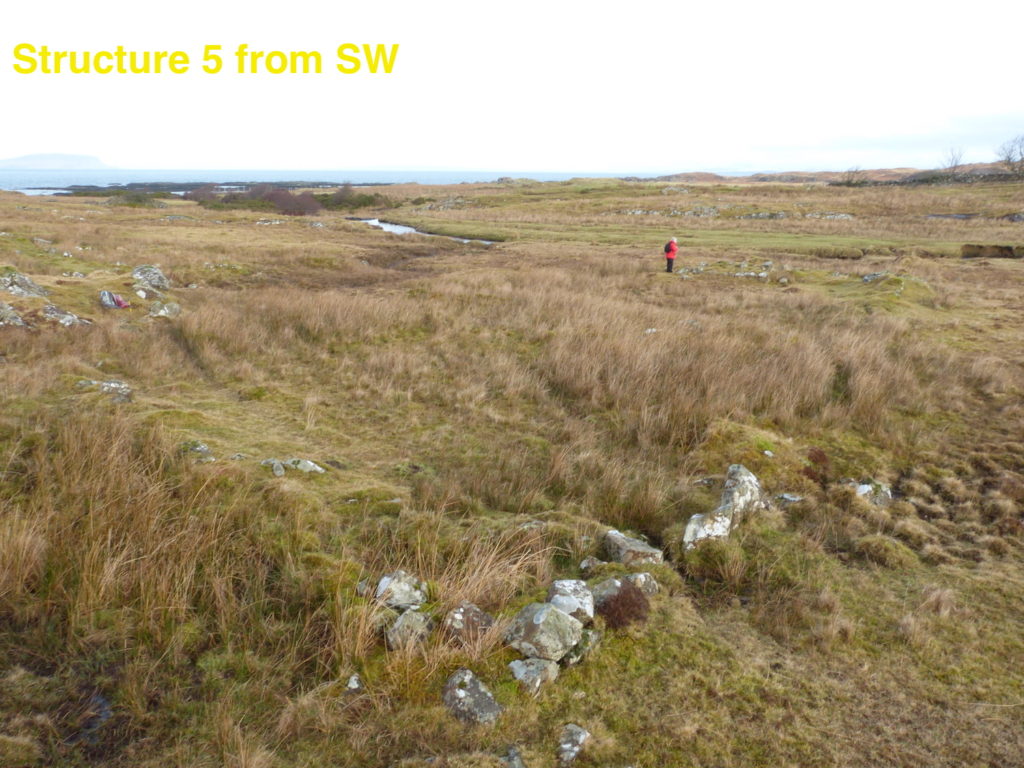 Structures 4 and 5 both appear to be enclosures.  This one, the larger of the two, may well be the enclosure so clearly shown on Roy’s map. It measures about 14m x 12m, has various internal structures visible, and has an opening towards the north.

Structure 7 lies to the south, an elongate mass of scattered rocks, and needs further investigation. 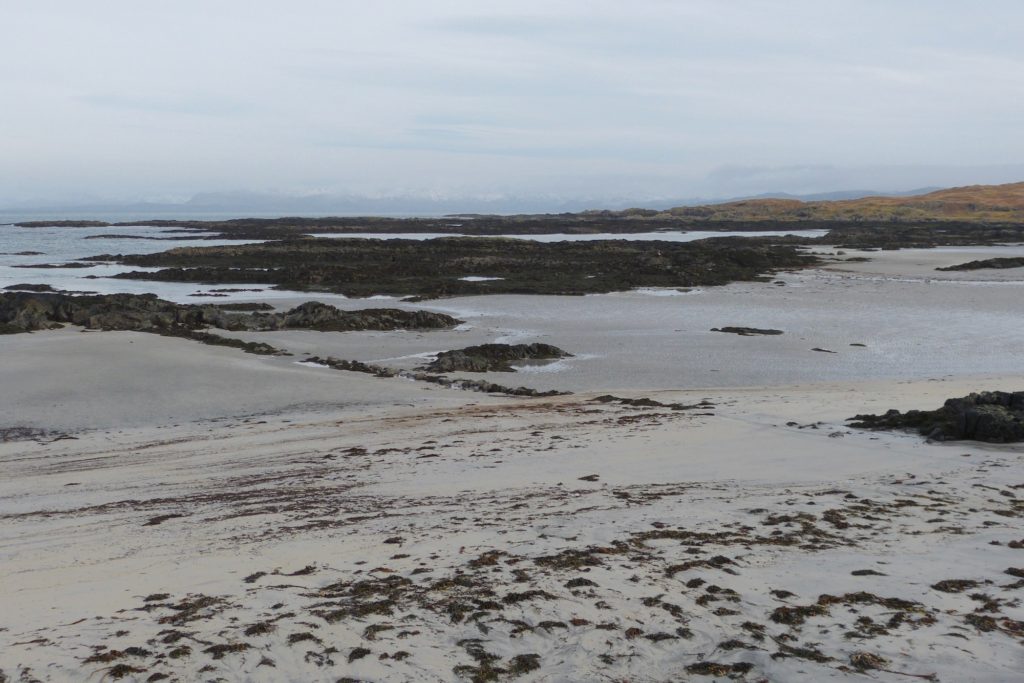 As part of this survey, ACA identified a linear structure running down the beach as part of a fish trap

[1] Much of the early historical data courtesy J E Kirby (2015) ‘The Lost Place-names of Ardnamurchan and Moidart’, available through Amazon
[2] Low’s work is held at the National Library of Scotland
[3] Bald’s 1806 map courtesy Donald Houston at the Ardnamurchan Estate.
[4] Maps accessible at the National Library of Scotland’s website, link here.